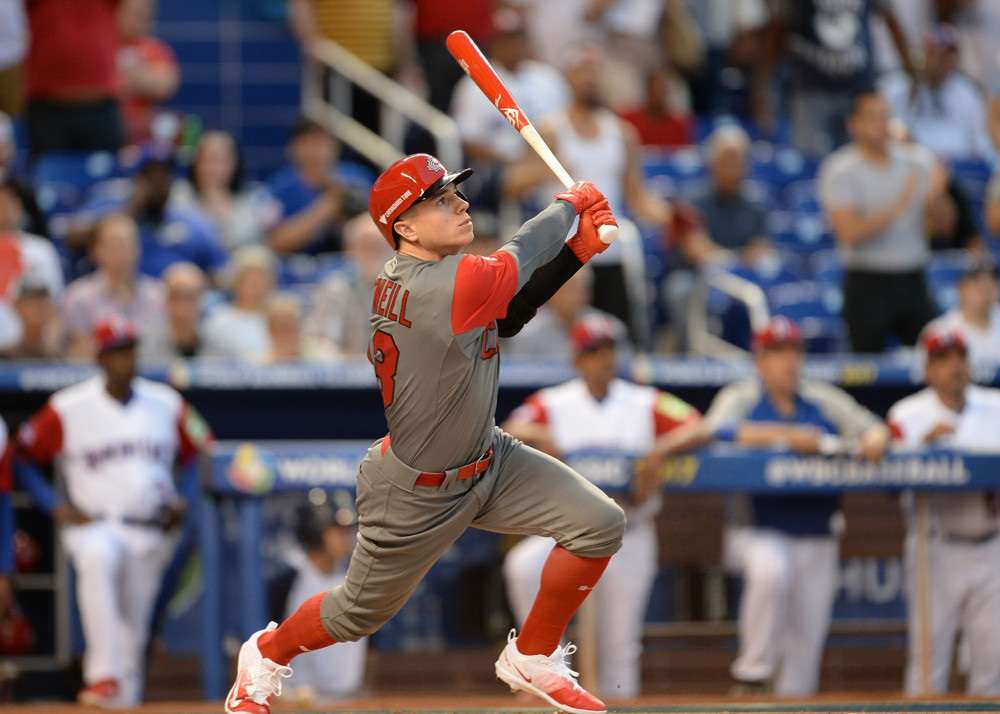 The trade deadline is a magical time of year in the fantasy world. New opportunities as far as the eye can see are created as MLB GMs wheel and deal up until the 4:00 pm deadline. Some of these moves deplete certain player’s fantasy value (mostly closers), but for the most part, playing time opens up for players that can give our fantasy squads a boost as we plug along into August. That’s the theme this week as several players below have seen their rest of season outlook brighten due to a select trade or two. The biggest opportunity created was made in St. Louis for a powerful rookie following the Tommy Pham trade. That’s where we start this week’s waiver wire report.

It’s time to multi-task! Don’t abandon your fantasy baseball teams or our baseball coverage, but kick off your football prep and dig into our 2018 Fantasy Football Draft Kit. Then head on over to Fantrax and join a Fantasy Football league.

That roar you hear is the sound of Tyler O’Neill supporters around the world celebrating the Tommy Pham trade to Tampa Bay. Finally, O’Neill has a clear path to playing time. I don’t think O’Neill supporters have stopped partying yet, and rightfully so. Adding O’Neill has the potential to pay major dividends for your fantasy squad down the stretch.

Power is the name of the game when discussing O’Neill. He doesn’t waste time hitting puny little doubles either. It’s just dingers for Mr. O’Neill. In 225 Triple-A at-bats this season, O’Neill racked up eight doubles and 26 home runs with a .311/.388/.711/1.100 slash line. Those 26 home runs still lead Triple-A and are tied with Boston’s Bobby Dalbec for the 2nd most in the minors behind Seuly Matias’ 31.

Outside of a three-game stretch where O’Neill hit a homer in each game, his time in the Majors hasn’t gone too smoothly. Highlighted in that is a 19 plate appearance stretch where he struck out 14 times. Strikeouts will always be a part of what O’Neill is, but so will plenty of power. With playing time now becoming clearer, O’Neill needs to be added in all leagues.

Take a look up and down the Orioles lineup. Don’t look twice if you’ve just eaten because it’s disgusting. With Manny Machado and Jonathan Schoop out of town, the star power starts and ends with an aging Adam Jones. The Machado departure opens up a spot for the 2008 #1 overall pick, Tim Beckham, to slide in as the starting shortstop, and while he’s not even in the same zip code as Machado, there’s still some fantasy intrigue here. But wait Eric, why are you recommending I add a guy hitting .221 with four home runs? You losing it? Great questions. While the second question is up for debate, I’ll answer the first by having you look at what Beckham did in 2017.

After missing the entire 2017 season, Eovaldi was mostly an afterthought in the fantasy community. He’s a fine pitcher, but it’s not like he’s Clayton Kershaw coming back from injury or anything.  We’re talking about a guy with a 4.18 career ERA and subpar strikeout rate. For those reasons, excitement and buzz were severely tamed when Eovaldi returned to the mound and made his 2018 debut on May 30th.

Eleven starts later and the buzz is getting louder and louder with each passing start. In those 11 starts, Eovaldi has a 3.80 ERA, 0.94 WHIP, 1.1 BB/9, and 8.2 K/9. Those last three numbers are all career-bests for the 28-year-old right-hander. Now he gets to go from a Tampa Bay team ranked 21st in runs scored to Boston who leads the league and put up a 15-spot on the Yankees last night. While the strikeout rate won’t be anything special, Eovaldi’s control and ability to limit hard contact should keep his ratios low to go with the uptick in wins thanks to Boston. Run support is a beautiful thing, isn’t it?

If you’re struggling in the saves category, have no fear. The trade deadline specializes in creating several new closers to scoop up in fantasy leagues. Leclerc is exhibit A. The 24-year-old with two career saves now finds himself in the closer’s seat in Texas. And if you’re wondering if he has the stuff to thrive in the role, he does. Leclerc’s heater sits at around 96 mph with a change-up 8-10 mph below that. He’ll mix in a curve or splitter ever now and then, but the fastball/change combination is his bread and butter that has helped him rack up a career 11.8 K/9. Unfortunately, that also came with an ugly 7.9 BB/9 coming into this season.

The control still isn’t great, but is much improved at 4.3 BB/9. As of now, Leclerc is still available in around 70% of Fantrax leagues. Do yourself a favor and change that.

This one I don’t understand. A closer with a 1.31 ERA, 0.82 WHIP, 1.8 BB/9, and 12.6 K/9 is available in over half of Fantrax leagues. He might not be the Fresh Prince of Bel Air, but he’s too good to be this available. Smith features a 93 mph fastball that he throws around 45% of the time and offsets that with two breaking balls, headlined by a wipeout slider in the low 80’s that he uses to rack up the strikeouts. If you’re looking for some help in saves and Smith is available in your league, problem solved.

I won’t go into too much depth here. We all know who these guys are and how valuable they are. However, as you can see, some owners jumped ship when Cano and Osuna were suspended in order to free up a roster spot. With both men due back within two weeks, consider this your final reminder to stash them now if they were dropped in your league and are still sitting on the waiver wire.

Eloy Jimenez (OF – CHW) – Caution: Hot. Proceed with caution. July was the Jimenez show as the 21-year-old Dominican slugger slashed .435/.455/.839/1.293 with seven doubles, six home runs, and 13 RBI. Nicky Delmonico and Adam Engel aren’t going to hold back Jimenez for long. Stash him now or regret it come September.

Michael Kopech (SP – CHW) – With his control problems hopefully behind him, Kopech shouldn’t have much longer to wait for that call to Chicago. In his last four starts, Kopech has a 2.25 ERA, 0.96 WHIP, 1.5 BB/9, and 12.0 K/9. There are no other pitchers in the minors with a higher potential 2018 rest of season impact than Kopech.

Austin Riley (3B – ATL) – There were several rumors surrounding the Braves and various third baseman, but ultimately, they stood pat at the hot corner. Riley is in a little bit of a funk right now at the plate, but appears to have corrected his strikeout woes that plagued him earlier this season. If you have room to stash him, Riley carries decent upside in batting average and home runs. All he needs is Johan Camargo to slip up.

Peter Alonso (1B – NYM) – The Mets keep trying to convince us that they’re not calling up Alonso this season. I’m calling BS. For the season, Alonso is hitting .276 with 24 home runs and 90 RBI, and has started hitting his stride at Triple-A after a slow start at the level. The Mets could be stubborn and keep him down, but Alonso’s high offensive ceiling makes him well worth a stash if you have the room.