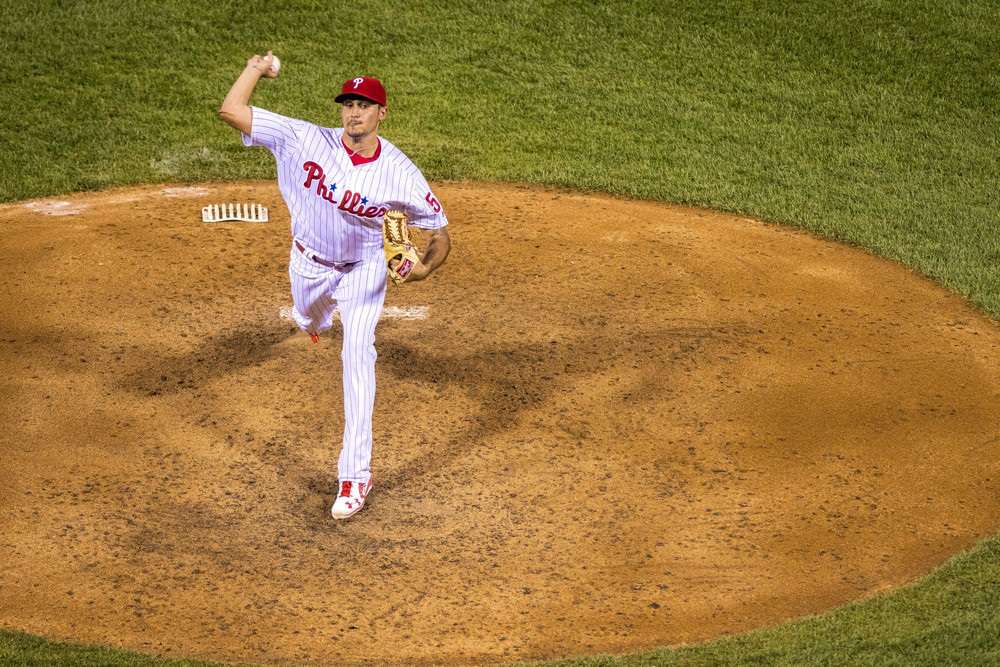 I’m not going to beat around the bush, this week seriously lacks sexy, upside waiver wire pickups. However, this week brings plenty of under the radar recommendations that you might not be excited about right away, but give it a month or so and you’ll see that these guys will still likely be on your team. The headliner this week is a pitcher in the City of Brotherly Love that has outperformed Phillies staff ace, Aaron Nola, over the last month.

Time for a quiz. Over the last month, which Phillies starting pitcher leads the team with five wins and a 2.86 ERA? Aaron Nola, you say? Incorrect, though his ERA is 2.87 over the last month. No, the answer to this question is, of course, Zach Eflin.

First off, don’t look at his 2017 ERA. That’s water under the bridge as far as I’m concerned. What we need to focus on is the here and now, and Eflin’s here and now is pretty damn good.

Like I said, Eflin has racked up five wins with a stellar 2.86 ERA and 1.10 WHIP over the last month, which drops his season rates to 3.02 and 1.13 respectively. Only Nola can make the claim that he’s been a better pitcher than Eflin this season in Philadelphia. You can attribute his success this season to his fastball and slider. He’s throwing his fastball nearly twice as often as he did in 2017 and has cranked the velocity up from 93.7 mph to 95.1 mph. On top of that, his slider has become a much more effective offering for him and a true out pitch. If Eflin is still on your waiver wire, change that.

Want to experience Draft Day all over again? Why not start a Second Half Fantasy Baseball League over at Fantrax?

He might not have gotten as much fanfare as the other Yankees prospect arms, but Loaisiga is doing his best to prove that his upside warrants attention, too. After posting a 3.00 ERA, 1.13 WHIP, 0.8 BB/9, and 11.6 K/9 across two minor league levels, the Yankees decided to have him skip Triple-A entirely in order to help out in the Bronx. We’re three starts into his Major League career and so far so good.

In those aforementioned three starts, Loasiga has a 1.93 ERA, 1.29 WHIP, and an identical 11.6 K/9. The only major difference so far has been the eight walks in these three starts, but that’s nothing to be worried about as Loaisiga has shown plus control over the last couple years.  The Yankees seem okay with him in the rotation moving forward and you should be too.

Whether it’s from their own farm system or from off the scrap heap, the Rays sure do have a knack for finding valuable pitching. The latest example of that has been with 28-year-old right-hander, Nathan Eovaldi. After missing the entire 2017 season, Eovaldi didn’t waste much time picking up where he left off in 2016. His ERA still sits around 4.00, but his H/9 and BB/9 have both significantly improved. Expecting high strikeout rates from Eovaldi often proves to be foolish, but there’s still some decent back-end fantasy value here worth scooping up if you need a pitcher.

Remember him? Schebler cranked 30 home runs in just 473 at-bats last year with the Reds and even led the National League in homers at one point. Yes, you read that right. Granted, those 30 dingers came with a pedestrian .233 average, but for a spell, Schebler was one of the hottest hitters in the Senior Circuit. Fast forward 12 months and Schebler is doing things in reverse. After starting the season slowly, he’s really caught fire over the last month, hitting .348 with five home runs, 12 RBI, and 17 runs scored.

First-pitch BOMB by Scott Schebler cuts the deficit in half.

Schebler is proving that he can do more than just hit dingers. His groundball rate is up quite a bit this season, but he’s offset that by using the whole field more and raising his hard contact rate from 39.4% to 42.2%. That 42.2% is right in the same area as mashers like Giancarlo Stanton, Nelson Cruz, and Nolan Arenado. He’s still bound to get 1-2 days off each week due to the crowded Reds outfield, but Schebler deserves a look in all leagues while he’s hitting this well.

The season-ending injury to Corey Seager at the end of April was a huge blow for the Dodgers and his fantasy owners but a boon for the fantasy value of Kike Hernandez. The Dodgers’ Swiss army knife has seized the additional playing time and has proved his worth to the Dodgers and fantasy owners alike. In 191 at-bats this season, Hernandez has socked 13 home runs, including five alone in the last two weeks. The batting average has once again been nothing much to look at, but the power “Kike” brings to the table while being eligible at both middle infield spots is incredibly valuable.

Maybe you’re one of the unfortunate ones that lost Seager a couple months back and have been struggling to find some decent productions from your shortstop position. Or maybe you just lost Carlos Correa to the 10-day DL. Whatever your reasoning, if you need some middle infield help, I’d take a long hard look at Hernandez.

The suspension for Jorge Polanco is finally nearing its end. The Twins starting shortstop was popped for PEDs back in the spring, costing him the first 80 games of the 2018 season. The incumbent Ehire Adrianza has been serviceable, but Polanco is expected to regain the role when he’s eligible to return to the lineup on July 5th.

Now, Polanco isn’t the type of shortstop that will carry you to the promise land, but his ability to provide stats across the board makes him worth a look before his return next week. In 749 career at-bats, Polanco has accumulated 17 home runs, 18 steals, 105 RBI, and 87 runs to go along with a .266 batting average.

Fantasy Baseball Waiver Wire: What Can Seth Brown Do For You?