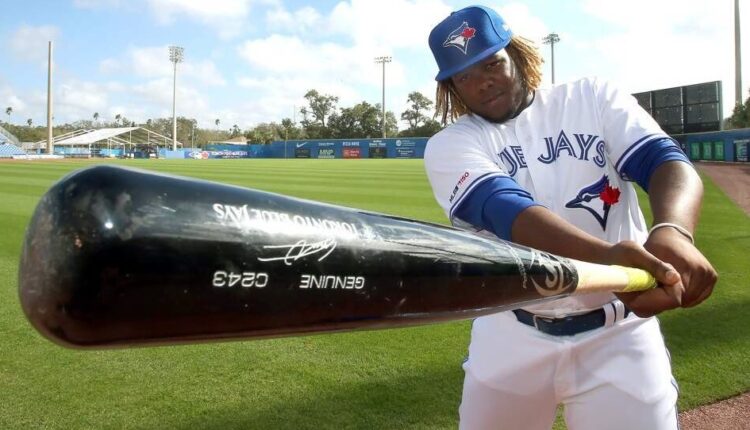 Welcome back to another article! Wow, can you believe it’s December already? It feels like the calendar this year went: January, February, March, and December am I right? As everyone gets in the holiday spirit, decorating their houses and buying gifts, there’s one gift you can always give yourself. That would be making my day and reading this article! Corniness over I promise. In a season in which a global pandemic was occurring, and we only had 60 games of data, it is incredibly hard to make assessments about players and their performances, and that includes Vlad Jr., who I’ll be looking at in this article.

This offseason, I’ll be doing a series of articles looking at what went right, what went wrong, and the overall 2021 outlook for certain players. I can only take into account the data that has been given and use that to best assess what to expect from each player in 2021. This should be fun! Let’s dive into our next player in this series: Vladimir Guerrero Jr.

Take away where Vlad Jr. hit the ball for a second (we’ll get to that later) and focus on HOW he hit it. Vladdy Jr. hit the ball with a 92.5 mph exit velocity, which was top 7% in the league. He added to that with a 50.8% hard-hit rate which was also top 7% in the league. His barrel percentage went up in tune with this and he also produced the lowest amount of weak contact in his short career.

Vlad Jr. was even able to parlay his strong and powerful hitting all around the field. He lowered his pull percentage, while strongly increasing his straight away percentage, and even kept his opposite-field percentage within a percent from 2019. Vlad Jr. wasn’t just hitting the ball hard but he was spraying it all over parts of the field. This is big because it makes it incredibly hard to put a shift on against a player hitting the ball this hard, and hitting it to all parts of the field.

If you’ve followed Vlad Jr. since his call up to the Majors, you know one thing that he’s always struggled with was his weight. This and reported laziness was ultimately holding him back from being grouped with his young peers Fernando Tatis and Juan Soto. His weight kept taking a turn for the worse as it ballooned to 282 lbs at the start of Summer Camp.

Guerrero revealed during the shutdown that he really let himself go and has been solely relying on his god-given talent, and not putting in the necessary work to be great. Over the course of the season, Vlad Jr. shed 32 pounds (it has continued this offseason). This seems to have carried over to Vladdy’s play.

The dramatic shift in Guerrero Jr’s. profile does not seem to be an accident. Guerrero Jr. was quoted as saying, “At the start of the season my swing was too slow. Then when I dropped 20 pounds, my body felt much better, and the hands felt quicker.”

Vlad Jr’s weight loss seemed to create a more athletic-looking version of himself. This did not seem to just impact his power and bat-speed, but also his batting stance, swing path, plate coverage, and overall athleticism.

This was one of Vlad Jr.’s swings on Opening Day against the Tampa Bay Rays

Notice what seems to be very stiff, upright, and for a lack of a better word, a “hack” of a swing at this offering from Charlie Morton.

This next swing was Vladdy Jr. in the Regular Season Finale versus the Baltimore Orioles.

You can tell how much more comfortable Vlad Jr. seems here versus Keegan Akin. By playing at a lighter weight, his swing seems to have become more dynamic. The increased athleticism in his swing allows for even more plate coverage, adjustability, and bat speed. Not to mention power and force.

Okay, let’s talk about Mr. Ground Ball because I know that’s what you’ve been waiting for in this article. While all the power and the hard-hitting of the ball are there, Vlad Jr. has definitely struggled getting the ball up off the ground.

Another problem in Vlad Jr.’s profile is his already putrid launch angle went down from 6 degrees to barely under 5 degrees. This is going to again, reduce the ball being able to be hit on a rope to go over the fence or help Vlad Jr. get extra bases. This isn’t to say that this can’t change as Steamer projects a 29 home run season from Vlad Jr. in 2021. Vlad is a special hitter and once he hits the ball the way he does AND gets it in the air consistently, watch out.

While it was very encouraging that Vlad Jr. saw progression in expected batting stats versus fastballs and breaking balls, he significantly regressed versus off-speed pitches. Vlad Jr. saw an over 4% increase in the number of off-speed pitches he saw in 2020 and it appears Vladdy Jr. was not very comfortable.

Over 40 at-bats in the shortened season, Vlad Jr. saw his expected batting average and slugging cut in half from 2019. If you take into account his last 100 at-bats so you can have a larger sample size over the last two seasons, his numbers are still not great against off-speed.

Over Vlad Jr’s. last 100 at-bats, he’s hit .205 with a .370 slugging percentage. That also includes a 41.6% whiff rate in 2020 against off-speed. Vlad Jr. will need to strongly work on this if he doesn’t want to see another rise in off-speed offerings this year.

It’s long been understood how bad Vlad Jr. has been on defense in each of his first two big-league seasons. Vladdy Jr. committed 17 errors at 3B in 96 games in 2019 and 3 at 1B in 34 games in 2020. This is combined with negative defensive ratings all across the board.

This changed around the middle of this season, when Toronto started shifting him more in the DH slot than before. 23 of his 57 games this season were at DH and this could have had some impact on his hitting resurgence.

The frustrations of the errors he was committing, leading to extra fielding work and not focusing on the plate, were all factors weighting Vlad Jr. down. Simplifying the game for him I believe helped take some of the pressure off. Now at such a young age and with the sluggers that the Blue Jays possess, I don’t see this being a permanent thing for him.

Vlad Jr. has already talked about wanting to play third again and will do so in the Dominican Winter League. I would point out to not fully close the book on Vlad Jr. in the field just yet. Remember it took Pujols four years to settle into his position at first base and six years for Miguel Cabrera. Both first-ballot Hall of Famers were moved to multiple positions in their first few years.

Vlad Jr. who is only 21, made his highly anticipated Major League debut in 2019 and has shown his incredible raw power at the plate. Overall, his offensive performance has been somewhat underwhelming, especially compared to the hype that surrounded him through the minors and up to the show. So far, he has hit .269/.336/.442 with 24 home runs in 183 Major League games.

Guerrero Jr. said he is now eating differently, cutting out fatty foods and ingesting nothing but water after 7 p.m. He is also reportedly working out at the Blue Jays’ Spring Training facility where he’s hitting, taking ground balls and doing weight training. This could be huge for the arrival of the player we’ve been waiting for over the last two years.

It’s too soon to know if Guerrero’s 40-pound weight loss will translate into better production on the field in 2021. But it’s certainly something to consider as we look ahead to how we want to draft Vlad Jr. come 2021. Vlad Jr. seems to recognize that he has to put in the work now, and not just rely on his god-given talent.

Vladdy Jr. is currently the 6th first baseman off the board at around pick 60 in NFBC ADP. That is a 5th/6th round pick in 12-team leagues. While he should be A LOT lower in terms of his 2020 production, the tools are still there and the work ethic seems to have finally come around.

While there will be plenty of people avoiding Vladdy Jr. at this price, it is just low enough for me to take another chance on this slugger in 2021, his strong finish to 2020 along with the new work ethic has me swayed into believing in Vlad Jr. once more in 2021.