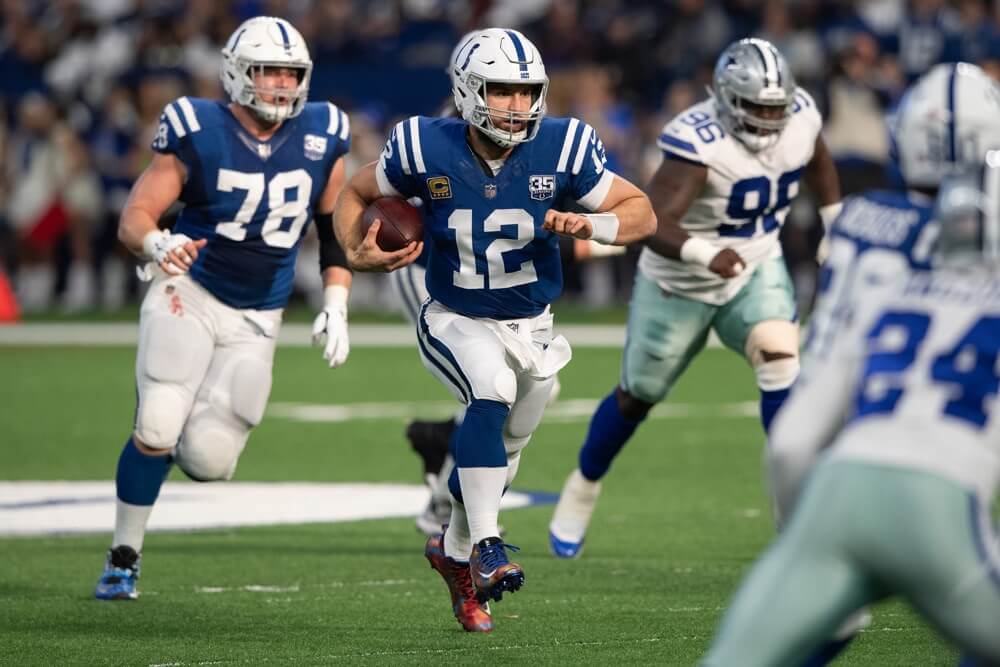 Here are some key players that are returning to NFL rosters that will be affected by significant skill position picks from the 2019 NFL Draft.

Vets Impacted by Incoming Rookies after the NFL Draft

Derek Carr: He now has the best pair of WRs ever in his career, with Antonio Brown and Tyrell Williams, plus potentially outstanding run support with the addition of RB Josh Jacobs. Versatile, dynamic and physical, Jacobs adds needed balance to the offense for Carr and just about completes a quality supporting cast for the Oakland QB. There can be no more excuses for Carr, and with the improved playmakers around him, he should at least be a high-end fantasy QB2 in 2019.

Jordan Howard: He already has a threat to his playing time with his new team, as the Eagles drafted Miles Sanders. Ultimately in 2019, these two could end up sharing touches, making both unpredictable flex plays. Sanders is the better receiver, but Howard could have the edge for featured carries based on experience. Philadelphia shored up its backfield very nicely, but now the outlook is fuzzy for both players in fantasy football for the upcoming season.

Mike Davis: As readers know, I liked Davis a lot as a potential sleeper for 2019 before the NFL Draft. I felt that with an opportunity to start somewhere, he could surprise a lot of people. Many other analysts disagreed with me, including our own Nate Hamilton. But then the Bears seemed to disagree with me too, as they drafted David Montgomery. There have already been published reports that Tarik Cohen is expected to see less carries in 2019. So now Davis will have to fight Montgomery for lead ball carrying duties. I still have hope for Davis, as rookie RBs are far from guaranteed to be handed extensive playing time right away, they have to earn it. Most will see Montgomery as the more talented runner and expect him to run away with the job while ignoring Davis. But I believe there will be a preseason battle for playing time at RB in Chicago that will be one to watch for fantasy purposes..

Early beat writer speculation out of CHI projects 120 carries for Mike Davis, a slight reduction in Tarik Cohen's 99 from last year and the rest to David Montgomery. https://t.co/qmCJcQ8K54

Russell Wilson: He has a handsome new contract, and Wilson finally has the big, all-around playmaker he has often lacked in D.K. Metcalf. Jimmy Graham caught 10 TD passes in 2017 but was unreliable outside of the goal-line area. Then there were attempts to squeeze the little remaining life out of the likes of Brandon Marshall. Now Wilson gets a sizable all-around threat who can make plays downfield and stand out as a short-range TD threat. He needed a large target even if Doug Baldwin was not a question mark.  Wilson could throw more short-range TD passes this season and the Seattle offense could be a bit less run heavy, as leaning too much on the ground game did not work well in a playoff loss at Dallas. His yardage totals may be boosted a bit this year, and the additions of Metcalf and Gary Jennings in the NFL Draft should assure fantasy owners that Wilson’s QB1 status will not be heavily affected as his receiving crew has been bolstered by an infusion of new talents. Metcalf and Harris will provide needed receiving depth behind Tyler Lockett and possible breakthrough performer David Moore.

Andrew Luck: There may not be a better pairing of a superstar QB and a top receiving crew outside of Indianapolis. After a major comeback season, Luck’s pass-catching corps looks even more outstanding with the addition of electric rookie Parris Campbell. The rookie will be able to score from anywhere on the field, but with so many viable targets to go to, Campbell will have to share a lot of receptions and that could mean he is a boom or bust fantasy type in his rookie year. But adding another tremendous threat to defenses to go with T.Y. Hilton, Eric Ebron, Jack Doyle, plus newly acquired big target Devin Funchess and emerging pass-catching RB Nyheim Hines gives Luck an unmatched arsenal. He has a great chance to be the No. 1 QB in Fantasy Football this season.

David Johnson: The Cardinals have a new coach and a rebuilt passing game infused with promising rookie playmakers reeled in via the NFL Draft. The veteran RB will now work with the most talented QB of his career, but will also need to carry a sizable load to take some pressure off him. Johnson should also see more consistent goal-line opportunities in 2019. You should draft him with confidence as a back end RB1.

Lamar Jackson: The Ravens got rid of their underwhelming veteran WR starters from last year and pegged two prominent WRs in the NFL Draft. Marquise Brown was widely regarded as the best WR available and Miles Boykin can complement him well. But Jackson is still raw as a thrower and having inexperienced wideouts as his best threats does not bode well for his production in the short term. It does make him an upside performer for the future, though. Jackson could be a high-end QB2 this year, but a versatile and highly productive QB1 two years from now.

Jimmy Garoppolo: The 49ers are building a crew that could evolve into a solid WR unit for their QB of hope. Deebo Samuel is a yardage after the catch threat who can pair well with rising and versatile big-play artist Dante Pettis and deep threat Marquise Goodwin. Add TE George Kittle to that receiving mix and Garoppolo has much to work with as he looks to gain fantasy QB1 status in 2019.

Todd Gurley: This is the obvious situation to be affected after the drafting of Darrell Henderson. There is already talk of Gurley being employed in two RB backfields and being rested more. The fears about Gurley’s health will creep into the 2019 season and possibly beyond. He is going to lose his RB1 status in this season’s drafts.

Golden Tate: I believe the Giants drafted Daniel Jones because they want to employ a high percentage passing game and lean heavily on their superstar RB. Jones fits that mold perfectly, and while he won’t be any better than a fantasy mid-range QB2, Tate will be very busy as his prime target. I also believe the Giants brought in Tate as a “safe” receiver for whatever rookie QB they intended to draft. I think Jones will start this year and Tate will be a quality WR starter again in PPR leagues.

Also, check out the rest of our extensive 2019 NFL Draft coverage!