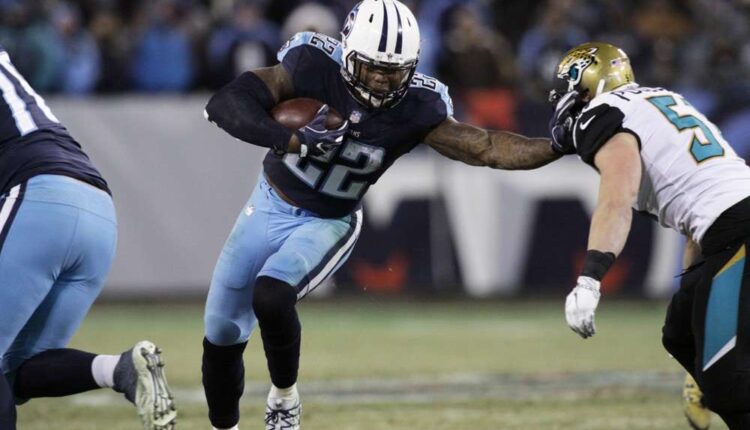 Loading up on value at wide receiver while everyone grabs running backs is a viable strategy, especially later in the first round. Reliability and opportunity at RB1 and RB2 are the keys to such a strategy. You need backs who get plenty of quality touches. Here are a few value running backs to target after the smoke clears in the first and second rounds in this week’s edition of Fantasy Stock Watch.

After two years as the poster boy for the Fantasy Football fan club, the general public has gone full heel turn on Derrick Henry. Going into his rookie season after his Heisman trophy winning year at Alabama, many were projecting Henry to be the lead guy for the Titans. Demarco Murray was signed to a big contract but had just had a down season as an Eagle. Murray went on to be the RB5 in Fantasy.

Last season Henry had a solid season even though he split carries with Murray. But, at the end of the season, the people got what they wanted even though the Fantasy impact was limited. Henry had 28 carries in Week 17 which is the kind of volume that everyone was waiting for. With Murray sidelined, Henry dominated in the Wild Card game against the Chiefs. He finished the game with 23 carries for 156 yards and a touchdown and added two catches for 35 yards.

Now Murray’s 223 touches are gone, but Dion Lewis steps into the picture. Lewis will undoubtedly get a lot of work in this offense. However, when I look at last years workload, I project Henry’s 187 touches to go up and Lewis’ 212 for the Patriots to decrease. Lewis was used heavily in 2017 in the last eight weeks and will be more in a pass-catching role in Tennessee.

Henry will be the lead guy this season and is a fine RB2 for standard with RB1 upside. Murray took a lot of opportunities away from Henry in the red zone with 20 carries. The Titans are going to be improved on offense and owning a bruising back like Henry on a run-first offense will be optimal in Fantasy. The third-year back is a physical specimen and his burst score – which incorporates a players vertical jump and broad jump along with the height and weight- is in the 88th percentile. In other words, this guy is a monster.

Henry will average over four yards a clip with a projected 215-230 carries. Feel good about grabbing him late in the third round as he is one of the more upside-heavy value running backs but still has a safe floor.

RB facts podcast! @HarrisFootball joined @BogmanSports and @IsItTheWelsh om Episode 149 to go thru a variety of different scenarios with backs this year from McCaffrey's Standard drop off to Derrick Henry and Joe Mixon ranks up. All that and more!https://t.co/OLtdM1A0Ib

Collins is not a very sexy pick right now, but non-sexy players are great when evaluating value running backs. Let everyone reach while you sit pretty with a player who will get opportunity at a good draft price.

Collins had 212 carries last season even though he started the year with three straight games of less than 10. Collins earned the starting role and finished the year as the RB15 with 973 yards and six touchdowns. He did have 23 catches for 187 yards, but Buck Allen will serve as the pass-catching back for the Ravens in 2018.

Kenneth Dixon presents risk for Collins, but he’s coming off a torn meniscus and will have to earn playing time. Collins averaged 4,6 yards per carry and will only be 24 years old going into this season. Fresh legs and huge burst out of the backfield in a starting role is the kind of running back you want in the fourth round

The Ravens offense is underrated going into 2018. Their pass-catchers are better as a unit than they have been in years. Some sneaky upside exists if Collins and Lamar Jackson get on the field a few times a game. The run/pass option presents opportunities in space and that is what Jackson does best. Even with Flacco, Collins could sniff 250 carries in 2018 making him one of the most under-appreciated value running backs this season.

The Packers running back situation finally has some clarity, at least for the first two weeks of the season. Aaron Jones is suspended for Week 1 and 2 which means that Jamaal Williams is the favorite to assume lead-back duties. Ty Montgomery will get carries but his services will be used more in a pass-catching role.

Williams had 142 carries from weeks 10 through 17, including four games with 20 or more carries. He was also targeted five or more times in four of those games. Aaron Jones was active for all of those games which means there is reason to believe Williams will outpace Jones even when he returns from suspension.

The Packers will be starting the year at Lambeau against the Bears and the Vikings. Chicago gave up the ninth fewest and Minnesota the fewest Fantasy points to running backs in 2017. While those matchups are not very enticing, Williams will get enough volume to be relevant in Fantasy. Given that his quarterback will be Aaron Rodgers and Williams did not have his starting quarterback in the last eight weeks, there is actually upside for the Packers running back in those games.

If he plays well, which I believe he will, once Jones comes back Williams will still be used more in early-down work. Williams is the only one of the three running backs that can be effective in a three-down role. He has the best chance to become the RB1 in Fantasy on this Packers squad. This is what makes him one of the more intriguing value running backs who can be taken in the seventh round.