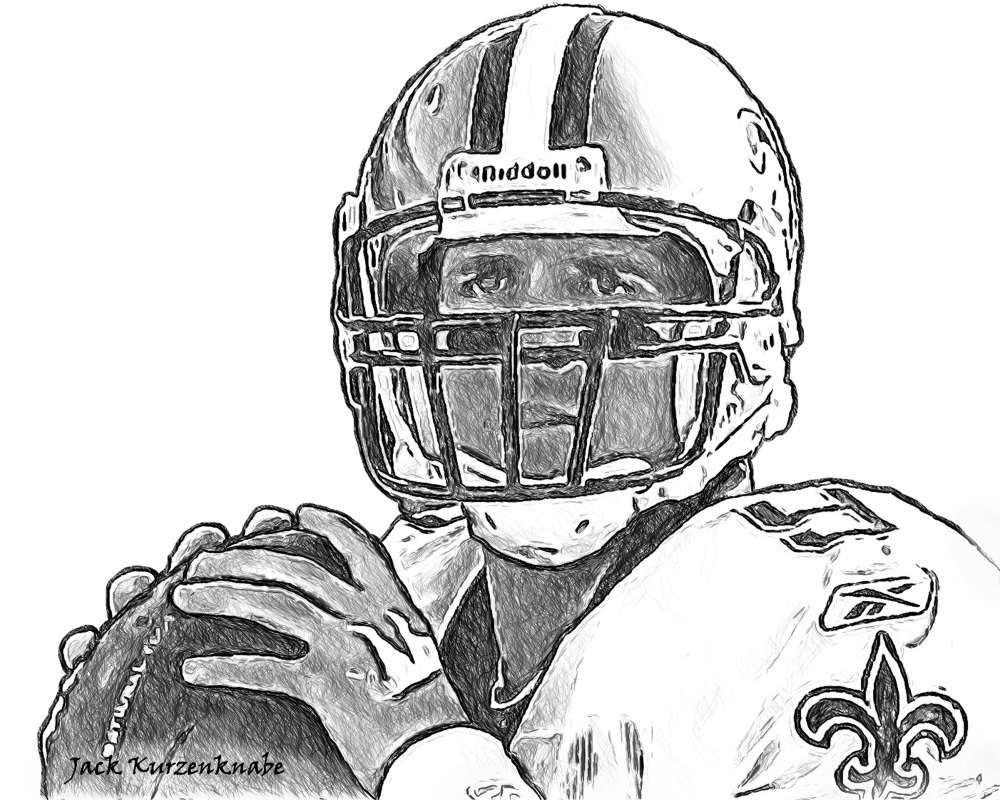 “That player is dead to me,” is a common phrase used by fantasy football owners who have written off someone after all hope is lost. It could be that the player has simply aged out of his prime or it could be they have been too disappointing to even think about anymore. We have all been there and we all have those certain players that we have no desire to think about again.

However, there a few players who have seen their value drop in the eyes of the masses that still have plenty of gas left in the tank. These players can range from the near elite to the bottom of the barrel, but they all can provide value well beyond what is expected of them. The following players are not dead yet and you should give them a hard look for the upcoming season.

Drew Brees has been one of Fantasy Football’s most reliable quarterbacks over the last decade. He finished well within the top tier at the position up until 2017, with 11 straight Top-6 finishes. However, a substandard 2017 season has left many thinking it may be the beginning of an age decline for the New Orleans star. Do not be one of those people.

Brees attempted 536 passes last year, the second-fewest of his career and over 100 attempts below his career average. This was mainly due to having an amazing and efficient backfield, led by Alvin Kamara and Mark Ingram. Those two ran time off the clock while giving the Saints quarterback less of a reason to throw as often. Don’t expect this to happen again.

So what else can we hang out hat on the expect a bounce-back from Drew Brees? How about the fact that his skillset is completely intact? Brees threw for 8.1 yards per attempt in 2017, which far exceeded his 7.7-yard average from the preceding decade. He was also accurate on 80.7 percent of his passes, which was the most accurate season of Brees’ career. In fact, only Alex Smith finished with a higher QB-rating than Brees’ 103.9 last year. 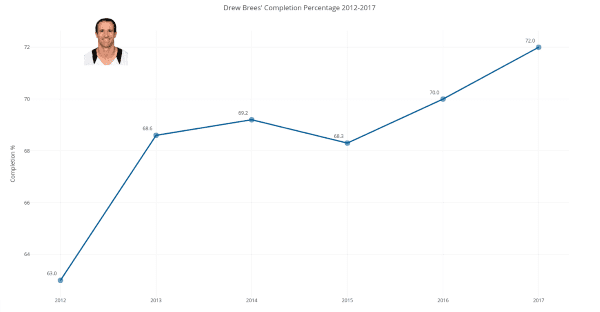 Need more convincing? Brees only threw a touchdown once ever 23.3 attempts last season after averaging a TD every 17.8 attempts since 2007. What if the future Hall of Famer averaged a touchdown once every 17.8 attempts last year? He would have thrown 30 touchdowns instead of just 23. If no other positive regression came to Brees, that alone would be enough to raise him back into the top tier on fantasy quarterbacks.

The bottom line is that Drew Brees is one of the most undervalued players heading into this season. He is still an elite quarterback. He suffered from having an amazingly proficient backfield last season which seemed to drain from his typical counting stats. He still maintained his amazing accuracy and with a little bit of positive regression in pass attempts and touchdown conversions, we could be looking at another stud season from the Saints captain.

Some things to consider:

New Giants head coach Pat Shurmur has made it clear this offseason in his support of Eli Manning as the starter in New York. If the Giants didn’t feel this way they would not have selected running back Saquon Barkley and offensive lineman Will Hernandez to start their draft. These two players were added to help the team win now as the Giants ranked 23rd in rushing yards per game while allowing the fourth-most sacks last season (27).

I am not sure how confident I am in Manning himself, but anyone walking around with this many weapons is bound to do some damage. He also has all the motivation in the world to perform after being benched last season

I am not sure why more people don’t see Doug Martin as one of the more undervalued players for 2018. It is true that Martin has been very inefficient for the majority of the last three seasons, but he also showed flashes of brilliance all while playing behind one of the worst offensive lines in football in Tampa Bay. Martin is taking his show on the road this season to play for the Raiders, who boast one of the very best offensive lines in football. Martin should be like a kid in a candy store.

The only competition in the backfield is 32-year-old Marshawn Lynch. At that age, a significant dropoff (possibly off a cliff) could be reasonably expected for Lynch who has made a career off of running through hard contact. The reports from offensive coordinator Greg Olsen on Martin have been very positive and it shouldn’t be a surprise if he jumps back onto the fantasy radar in a big way. Martin, who boasts multiple 1,400 rushing yard campaigns in his career, can be drafted outside of the Top-50. You should grab him.

Every three years, Doug Martin has 1,400+ yards rushing. He’s due for another in 2018: pic.twitter.com/obzDWj6IlZ

I can hear the screaming now. “But Kenyan Drake?” and “Frank Gore is terrible.” I hear you. I do. However, I have serious doubts that the Dolphins signed Frank Gore to sit on the bench and Frank Gore did not sign with Miami to end his career on the bench.

I actually do like Kenyan Drake as a potential breakout player this season, but be honest with yourself. Would you really be that shocked if Frank Gore is the Week 1 starter? Could Gore simply be a wasted pick in drafts? Maybe. The fact is that Miami is not going to be very good and Frank Gore is trailing Curtis Martin by just 75 yards for fourth on the all-time rushing list. He is going to get his reps no matter what and it’s possible that the future Hall of Famer has one decent season left in him. Do not invest a spot if it means giving up a high ceiling player. Just don’t forget that old man Gore is out there, he may not be dead quite yet.

Brandin Cooks and Danny Amendola left New England during free agency while Julian Edelman could be out four weeks due to a PED suspension (although that seems up in the air right now). The beneficiary will certainly be Jordan Matthews, who could end up being a significant role player for Tom Brady. You may have noticed, but Mr.Brady likes to throw the ball.

The Patriots have been in the Top 5 in passing yards per game the last three seasons:

Jordan Matthews still has talent. All he needed was the opportunity to prove he still has it. This is his shot and he is well worth the end of the draft flyer he would cost to find out.

Austin Seferian-Jenkins had a career season in 2017 with the Jets. Seferian-Jenkins hauled in 50 passes for 357 yards and three scores after collecting just 55 receptions in the previous three years. Blake Bortles needs someone to step up in the offense to help stabilize a balanced attack behind a talented young wide receiver core led by Marqise Lee and Dede Westbrook.

He can contribute as a reliable red-zone target and may very well be the team’s second-best receiving threat behind Lee. Jenkins is a TE2 with intriguing upside with the Jaguars and can be selected without risk towards the end of the draft. No risk, high reward sounds like the recipe for creating undervalued players to me.

Fire & Ice: A Carpenter To Build Your Dream Team