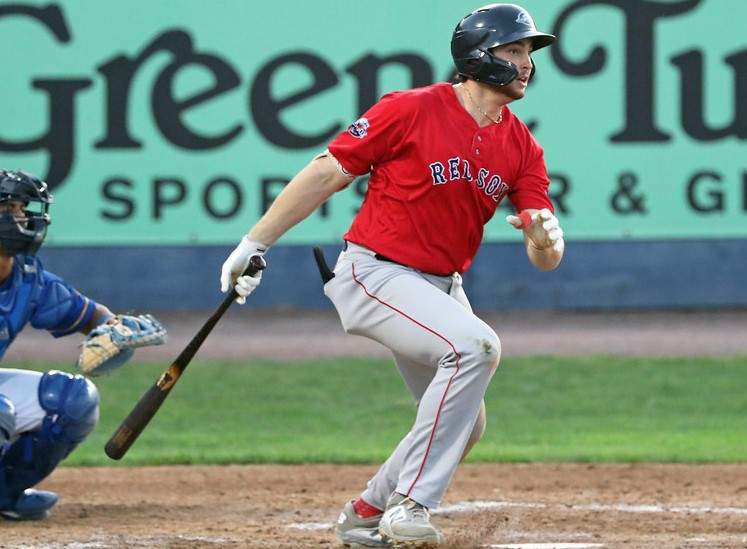 Let’s go back in time a little. With how this year has gone, I’m sure it won’t take much to convince anyone to leave 2020 for a bit, even if just for a second while reading this article. The year we’re travelling to is 2018, June specifically. As a lifelong, diehard Red Sox fan and someone who analyzes and writes about prospects, I was downright giddy when Triston Casas fell into Boston’s lap at pick 26 in the draft. It’s not often that your favorite team selects the player you want them to, especially in the MLB draft where a lot more factors into each selection.

Taking my Red Sox bias out of this, Casas is an exciting prospect for both real life and fantasy purposes. Today, I’m going to break down his profile and discuss why you should be trying to acquire him wherever you can in dynasty leagues.

The buzz surrounding Triston Casas was high following the 2018 draft, at least in Boston circles. The Red Sox assigned him to their Gulf Coast League affiliate in Rookie ball and Casas made his professional debut on June 22nd, going 0/3 with a pair of strikeouts. Then in his 2nd game on June 25th, Casas injured his thumb diving for a grounder and wound up needing UCL surgery which cost him the remainder of the season. Casas returned in 2019 and showed why the Red Sox took him in the first round.

In 118 games in the Single-A South Atlantic League and two more in the Class-A Advanced Carolina League, Casas slashed .256/.350/.480 with 26 doubles, 20 home runs, and 81 RBI across 500 plate appearances. He also recorded an impressive 11.6% walk rate and respectable 23.6% strikeout rate. Casas flashed his impressive raw power throughout the 2019 season and was one the players I was most interested in seeing play in 2020 as there was a good chance he would’ve reached my neck of the woods in the Double-A Eastern League at some point in 2020 if we had a minor league season. Damn you Corona.

Even without a minor league season in 2020, Casas still continued to dazzle at the Red Sox alternate site in Pawtucket, Rhode Island, the home of their Triple-A affiliate, after being added to the 60-man player pool in mid-August. It seemed like we were getting videos of towering Casas homers regularly in August and September this year, which just added to the excitement surrounding the big first baseman.

On top of that, at one point, Casas got hit by a Tanner Houck pitch but declined to take first base, opting to finish the at-bat. What happened after that you ask? Great question. After declining to take first base, Casas clobbered a mammoth home run that might not have landed yet. What a boss move.

Casas will be 21 when the 2021 season kicks off in April, and assuming we have minor league baseball back in action, I’m anticipating he begins in Double-A Portland. There’s a small chance you see him debut with Boston late in the 2021 season if all goes according to plan with his development, but the most likely ETA has him debuting in the 2022 season. But trust me, he’s going to be worth the wait.

Now, let’s dig into why I’m so high on Casas and consider him a stud first baseman in the making.

Big, strong, and beastly can all accurately describe the frame of Triston Casas. He’s listed at 6’5 and 240 pounds, and is every bit of that. From the shoulders down, this is a strong frame. Casas is broad chested with incredible upper body strength, long levers, and tree trunks for legs. Has filled out a little in his upper half since being drafted it looks. Probably nearly maxed out physically at this point.

While the power was very apparent from the get go with Triston Casas, the hit tool wasn’t quite on the same level. It’s still not, but Casas has gone from someone most projected to have an average hit tool to one that now has plenty of 55-grades thrown his way and even some borderline 60-grades.

At the plate, Casas has a wider setup, slightly crouched over pre-pitch with his hands starting shoulder high. As the pitch is coming in, Casas will use a moderate load onto his back leg with his hand coiling back and slightly up. With sluggers his size, you’ll often see a leg kick used for timing, but Casas uses more of a toe tap as you can see below.

Another characteristic that you will sometimes see from sluggers with longer limbs is a longer swing. Casas is one of the exceptions to that. As mentioned above, Casas doesn’t have a big hand coil. His moderate load and hand coil along with his exceptional hand speed allows him to drive forward into the zone with plus bat speed, solid rotation, and a direct path to the ball, Those quick hands will whip the barrel through the zone with a slight uppercut swing path.

For someone his size, Casas has shown exquisite barrel control and is able to use the entire field well. In his one full minor league season to date, Casas showcased that all-field hitting ability with 60% of his batted balls going to center or the opposite field.

1B/3B Triston Casas, our no. 2 prospect in the system, worked a long at-bat that ended with a hard lineout to left. pic.twitter.com/Ek4bn8Oykz

When you see someone Casas’ size, you’re also probably inclined to think that there’s going to be chase issues or two-strike issues. Not with Casas. When talking with Ian Browne of MLB.com, Casas mentioned that he grew up idolizing Joey Votto and tried to model his own swing and approach after the former MVP and six-time all-star. Earlier in 2020, Casas told the following to Browne:

All the tools are here for Casas to hit for a high average with an OBP that could potentially push .400 some seasons thanks to his above-average or better contact skills and advanced approach and zone awareness/coverage. This is a potentially prolific slugger that can also produce a high AVG/OBP.

It’s hard to not get excited when you watch Triston Casas in the box during games or hitting mammoth blasts during batting practice. I mean, just look at the bomb he hit below at the alternate site back in August.

This was in Rhode Island, but I swear I saw this fly over my house in Maine.

Casas possesses double-plus raw power and easy plus or better in-game power. His frame is strong throughout as I mentioned above, especially in his hips and lower half. Casas will create a ton of torque with strong hip rotation and his weight transfer is very good. Overall, Casas’ swing is explosive, but all moving parts are in sync with fluid movements. His slight uppercut swing path allows him to drive the ball in the air with regularity, although, Casas did get a tad groundball happy in 2019, sporting a 43.2% groundball rate compared to a 37.2% flyball rate. That’s not too bad in general, but Casas should really take off in the home run department when he gets that flyball rate up a little more.

This type of power profile has been around for several years now, dating back to when Casas was a high schooler in Florida, as you can see below.

IF Triston Casas (2018 FL) got a FB over the inner half and smoked a single to RF. Thrown out at 2B, but tons of strength to the profile; 105.5 mph EV. #mlbdraft pic.twitter.com/MSM8QcQ6ZY

The prolific power display in 2019 can be encapsulated in the below image courtesy of MinorGraphs by Prospects Live. For all prospects under the age of 20 (at the time) in 2019, Casas recorded the 3rd highest estimated flyball distance at 315.9 feet. That trailed only Alexander Canario and Heriberto Hernandez while finishing ahead of studs like Kristian Robinson, Marco Luciano, and Julio Rodriguez.

This is a 35-homer bat in the making and it wouldn’t surprise me one bit if Casas had some 40-homer seasons under his belt before he hangs up his cleats. I’ve often noted that Fenway Park can be tough on left-handed power, but Casas is one that can make it work.

As a big first baseman that is coveted for his offensive prowess, adding this section is almost pointless. But for the complete picture, I’ll add it in. Simply put, Casas is a below-average runner. At 6’5/240, Casas moves fairly well for his size and many have said that he’s a smart baserunner in general, but the foot speed just isn’t there. His foot speed grades as a 30, but his solid athleticism and baserunning acumen push this grade closer to a 40. Don’t expect more than a rogue steal or two annually for Casas.

While defense doesn’t factor in on the score sheet for fantasy, it does play a role for position eligibility. Casas was originally drafted as a third baseman, but Boston soon transitioned him over to first base where he profiles a bit better longterm, even though his strong arm would’ve fit in at third just fine. There’s also a massive road block named Rafael Devers currently manning the hot corner in Boston. Casas has shown solid skills at first base with his range and glovework and should be able to stick there moving forward. You shouldn’t have to worry about him being a player you can only slot at UTIL on your fantasy team down the road.

Without question, Triston Casas has the skillset to perform at an all-star level while hitting in the middle of Boston’s lineup. That’s a fantastic spot for him to be in as he’s going to have stars like Xander Bogaerts and Rafael Devers hitting around him. With Casas’ power, contact skills, and walk rate, he should be able to hit for a high average, produce a stellar OBP, and provide exceptional power and run scoring production. Casas projects as a potential four-category stud that could realistically be someone we’re drafting in the first two or three rounds of fantasy drafts down the road. And for real life baseball, get ready to see him on some all-star teams down the road.

For fantasy/dynasty purposes, Casas currently ranks as my #21 overall prospect and the #3 first baseman behind Spencer Torkelson and Andrew Vaughn. In my top-500 dynasty rankings, he’s already a borderline top-150 overall asset and should continue to rise in 2021 and beyond. Get him on your teams now, because his price tag is only going to continue soaring moving forward.