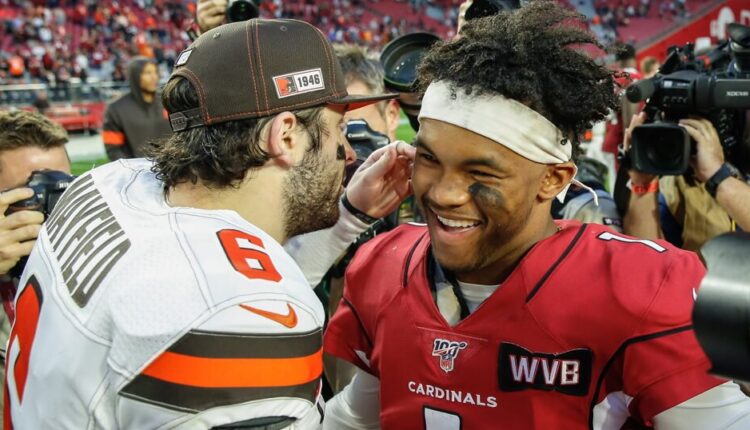 In most of my dynasty leagues, I was lucky enough to draft Lamar Jackson as my backup QB, prior to the 2019 season.  It’s no surprise that he led all of those teams to the playoffs on his way to being the leading scorer for the 2019 season.  We all know the importance of having a top-notch quarterback in any format. I never stop learning as a fantasy player, but if 2019 taught me anything, I learned just how much of an advantage having one of the young studs at the position can be.  This week begins my Top Five Under 25 series.  The goal is to get you those cornerstone pieces at each position in your dynasty/keeper formats.  Without further ado, here are my Top Five Quarterbacks Under 25.

At 24 years old, Mahomes has a trophy case full of accolades.  He has helped many owners collect fantasy football accolades as well. In 2018 the KC gunslinger posted a fantasy season for the ages, collecting 50 touchdowns to go along with just over 5000 yards while tossing just 12 interceptions.  2020 saw him lose some time to injury, and his production dipped to just over half of his 2018 touchdown total with 26 and just over 4000 yards.  Still nothing to sneeze at for fantasy purposes.  While he will not give you the rushing yards of the other four in this category he’s not a total dud either.  He finished both 2018 and 2019 with totals over 200 yards and two rushing touchdowns each season.  Mahomes’ endless supply of weapons only got better with the addition of Clyde Edwards-Helaire to the Chiefs backfield.  The rookie provides a proven pass-catching weapon out of the backfield and should step right into a meaningful role in the Kansas City offense.  The rest of the AFC West seems poised to try and hang with the Chiefs’ offense with numerous additions both via free agency and the draft.  This could lead to some high scoring division games, which bodes well for Mahomes’ fantasy production in his fifth year.  It’s tough to do better for your dynasty squad than this for your dynasty squad.  Is it worth it to spend an early pick on a QB?  If you want to set it and forget it for the next eight seasons, the answer is yes!

No matter how many times I look at the list of 2019’s leading rushers, it still amazes me to see Jackson’s name next to number six on the list.  He ran for more yards than guys named Fournette, Jacobs, Cook, and Barkley.  If you feel like paying up for a quarterback in your draft, it’s tough not to go with the 23-year-old from Baltimore.  Who doesn’t like having an RB1 and QB2 at the same position?  While the additions of running back J.K. Dobbins and wide receiver Devin Duvernay will help Jackson, he will still be counted on to shoulder the load on offense.  That will lead to another big rushing season.  The rapport built with tight end Mark Andrews will be there again, especially in the red zone.  Health will be the only thing that slows him down.  As we know, running quarterbacks are fantasy gold, but that gold comes with a higher risk of injury.  As he continues to learn the position, his 2019 stats should continue to be a baseline for future production.  36 touchdown passes could be a bit tough to come by if his supporting cast isn’t able to stay healthy.  If you want Mr. Jackson’s services, you’re going to have to spend one of your first two picks.  100% worth it.

If you’re digging Ron’s Top 5 Quarterbacks Under 25, you’ll also want to check out his take on this year’s crop of Rookie Quarterbacks.

It’s hard to argue that any NFL quarterback had a better offseason than Murray.  In addition to having another full offseason to learn Kliff Kingsbury’s playbook, the front office got him some help.  By help, I mean arguably the best wide receiver in the league in DeAndre Hopkins.  In his rookie season, Murray finished with over 3700 yards, while completing 64% of his passes.  Not bad for a guy considering playing professional baseball just two years ago.  Add in 544 yards on the ground and four rushing scores, and you get a season that ranked him seventh among fantasy QBs.  That finish put him just ahead of that Mahomes guy I mentioned earlier.  Not bad for a rookie!  With a current ADP near pick 60, Murray allows you to get a quarterback with the potential to vault into the top three in fantasy points at the position in 2020 at a discount.  It also helps that both San Francisco and Seattle were in the top five in rushing yards allowed to the QB spot.  If you want to be set at the position for years to come, but don’t want to pay up for Mahomes or Jackson, Murray is a nice consolation prize.

At age 24 Watson heads into his fourth season.  For some reason, it seems he has been around much longer.  His 2019 campaign saw him throw for 3852 yards and 26 touchdowns.  He did so with the services of DeAndre Hopkins, who yet again tallied over 100 receptions.  If you were paying attention earlier, you know D-Hop was shipped to the desert in exchange for running back David Johnson.  Yeah, I don’t get it either.  While Watson’s talent is up there with anyone on the list, his supporting cast scares me the most.  I do like the addition of Brandin Cooks (who is an excellent value in drafts right now), but he has underwhelmed in his last two stops in New England and Los Angeles.  There doesn’t appear to be that go-to weapon in Houston, but a bunch of secondary pieces.  If Will Fuller V is able to stay healthy (boy it was hard to type that while laughing so hard) he has the talent to do it.  Watson will cost you a similar pick to Kyler Murray in drafts, but if I’m picking my dynasty QB around pick 60, Murray is my guy.  If Watson slides a bit beyond that, he is talented enough to provide value when paired with the right dynasty skill players.

Allen didn’t do any one thing great in 2019 but did a lot of things well and sneakily finished with the sixth-most fantasy points at the quarterback position.  Allen finished 2019 with just over 3000 yards and 20 touchdowns in the air.  While not thought of as a rushing QB at his size (6’5” 240 lbs), in his two NFL seasons Allen has rushed for over 1100 yards and 17 touchdowns. The last spot on this list of top quarterbacks under 25 years old was tough to narrow down, but I gave Allen the nod for his legs.  It also worked in his favor that the Bills added Stefon Diggs to pair with deep threat John Brown.  Rookie runner Zack Moss adds another weapon to pair with shifty runner Devin Singletary out of the backfield.  The 24 year old’s current ADP is right around pick 70, and is fair value,  However, I have seen him last well into the round 8/9 range which allows you to stockpile backs and receivers before taking a long term option at QB.  His skill set is currently the least flashy of the five on this list, but his rushing ability adds just enough for him to be a solid long term dynasty option.

Got a beef with Ron’s Top 5 quarterbacks under 25? Let him hear it in the comments below.

Draft Premier League: 10 Free Agent Targets Ahead of the Restart