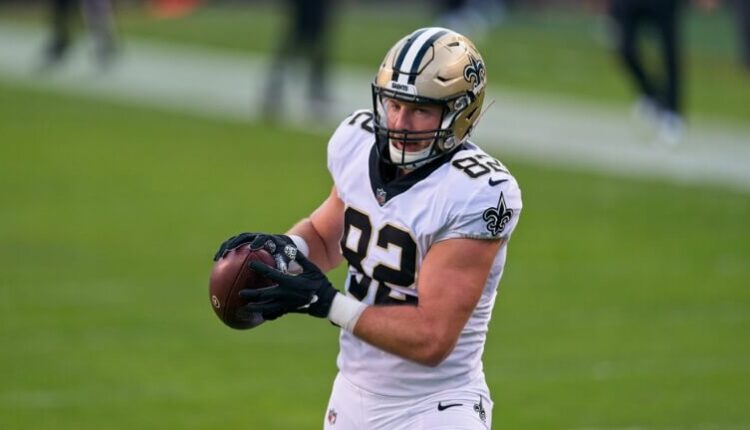 Tight end is a very difficult position to project in fantasy football. Given the lack of depth of the position, it’s rare for them to command a heavy target share compared to wide receivers, which makes them quite volatile on a weekly basis. Meanwhile, with how tight-end dependent it becomes, breakout players come from all different backgrounds. Could you imagine heading into the 2020 season that Logan Thomas and Robert Tonyan would finish as top-five PPR tight ends? With that in mind, who could be this year’s version of Thomas and Tonyan as tight end sleepers.

None of these tight end sleepers rank higher than 20th in tight end average draft position (ADP), yet could easily end up as starting-caliber tight ends for your fantasy team, if not better! Consider them priority bench stashes at the end of your draft, which can make you much more comfortable avoiding the position early- they could very well end up in the same situation as Thomas and Tonyan. Without further adieu, let’s break down some tight end sleepers for the 2021 season!

Between running back Derrick Henry, quarterback Ryan Tannehill, receiver A.J. Brown, and the newly-acquired Julio Jones, Anthony Firkser surely isn’t the first name you think of when it comes to the Titans offense. With just 815 career receiving yards over the first there years of his career, he’s played a very small role in what has been a high-powered offense; this may explain why he’s currently the 20th tight end off the board, per Fantrax ADP.

That said, I do not believe there has been a proper calibration for Firkser’s enhanced role in 2021. With Jonnu Smith signing a massive four-year contract with the Patriots, there is very little competition on the roster, meaning the 26-year-old should get a chance to shine this season. Considering Smith finished as the 12th-best tight end in PPR points per game, that is incredibly enticing.

To his credit, Firkser also looks to be a quality tight end. His 1.82 yards/route run is a quality average for someone down the pecking order when it comes to target share, and ranked 6th among all tight ends last season. Although it is a small sample size, it is worth noting he combined for 12 receptions and 164 receiving yards in the two games he ran over 20 routes in, a role that should be the norm for him. While he doesn’t induce a high average depth of target (7 yards), he makes up for it with production after the catch, a profile very similar to Smith.

With former offensive coordinator Arthur Smith taking over as the head coach in Atlanta, Todd Downing will now be calling the shots in Tennessee this year. Meanwhile, if the team doesn’t have as favorable of game scripts this season, that will also potentially lead to more passing. Firkser already ranked 13th in fantasy points/route run last season, and with a lot suggesting that his efficiency should translate well to an increased role, he’s definitely a sleeper tight end target of mine late in drafts.

No team got hit harder by the decrease to the salary cap than the Saints. In addition to losing multiple defensive players, they also had to cut ties with receiver Emmanuel Sanders and tight end Jared Cook, leaving a lot of vacated targets for a new-look offense in 2021.

Of anyone who stands to benefit from this, second-year tight end Adam Trautman stands out. With Cook departing to the Chargers, he’s an easy fit into an increased role for New Orleans this season, especially since the team gave up significant draft capital to move up to select him in the third round of the 2020 NFL Draft.

With Trautman only running 108 routes in his rookie season, it makes much more sense to look at his prospect profile coming out of Dayton, which is what intrigues me so much about him. Although an average athlete based on the 40-yard dash, he ranks in the 95th percentile in agility score, which correlates very well with the positive reports he’s gotten about his route-running prowess

Per Pro Football Focus, Trautman earned an absurdly high 94.3 receiving grade during his final season at college. Yes, that came against lower-level completion, but he also was one of the top performers at the Senior Bowl and went on to perform fine (1.58 yards/route run) as a rookie. He also isn’t someone you’d expect to work a vertical route tree, yet he certainly profiles as a monster after the catch (7.8 yards after catch/reception in 2020). The track record suggests he’s going to be a productive tight end, and, even then, the mystery only widens the potential range of outcomes with him.

Then, there’s the offense Trautman is entering. Cook led New Orleans in receiving touchdowns in back-to-back seasons, and head coach Sean Payton has always shown a preference to involve his tight ends greatly in his offense. Presumed starting quarterback Jameis Winston wasn’t afraid to target tight ends often in the red zone during his time in Tampa Bay, and there’s a plausible chance that Trautman could rank as high as second in overall targets this season. His youth, prospect profile, and favorable situation make him a clear target as a high-upside  TE2 for your roster.

When looking for tight end sleepers, there are two ways to go about it. For starters, you could look for someone that has a clear starting role, hoping their efficiency matches up with their expected volume. Yet, there’s another way to find an undervalued asset, and is one that I strongly prefer- look for productive tight ends that could “boom” should their role be better than expected.

That leads me to Cowboys tight end Blake Jarwin. Expected to be a “breakout” tight end in 2020, the 27-year-old essentially missed the entire season after tearing his ACL in Week 1, and has now gone extremely under the radar in fantasy drafts- TE28 in Fantrax ADP. It’s easy to see why; he doesn’t have a clear path to a starting role after backup Dalton Schultz filled in adequately for him, especially coming off of a notable injury.

As they say, though, money talks. Prior to the 2020 season, the Cowboys signed Jarwin to a four-year, $22 million contract. Yes, there’s a clear way for them to get out of the contract after this season, yet they may be inclined to try to mold him into a starting tight end given his reasonable $10 million salary combined in 2022 and 2023. Remember, this isn’t a team loaded with financial flexibility after signing quarterback Dak Prescott to a massive contract extension, so molding starting players on cheap contracts whenever possible is critical. Thus, if healthy, I still expect Jarwin to be the clear starting tight end for this offense.

Then, there’s the intrigue with Jarwin as a player. In 2019, the Oklahoma State product ranked in the top ten in yards/target (6th), yards/route run (8th), fantasy points/route run (7th), and fantasy points/target (7th). In other words, he was making the most of every opportunity he got, which likely played a major role in Dallas entrusting him as their starting tight end with the contract extension in the first place. Obviously, Jarwin’s fantasy value is limited if he is in a committee. That said, the upside is through the roof is he’s more than that.

Why? Well, the Cowboys offense is perfect for extracting fantasy production out of as many players as possible. The Cowboys had the most pass plays in 2020, and with them once again shaping up to be a team geared for shootouts, there will be plenty of volume to go around. Schultz got 85 targets in place of Jarwin, for perspective, and there is a very reasonable chance Jarwin simply earns more than that since he looks like the superior option. Of any player most likely to “blow up” and end up as the next Thomas or Tonyan, it’s him, although the floor is definitely lower than the other two players listed above. He’s the perfect tight end sleeper to pair up with a safer tight end as a bench stash while you assess his role early on.

As the 38th-ranked tight end in Fantrax ADP, Dan Arnold isn’t someone you even have to necessarily draft as much as monitor closely. That said, there is clear upside with his potential fantasy value.

After signing a two-year, $7 million contract with the Panthers, Arnold looks likely to be the starting tight end this season. As an elite athlete (98th percentile burst score, 94th percentile agility score) who led tight ends with 14.1 yards/reception last season, he provides rare big-play ability for the position. Considering that tight ends aren’t likely to command a high target share, it’s notable that he will be able to make most of the chances he gets.

Offensive coordinator Joe Brady didn’t utilize receivers DJ Moore and Robby Anderson as much you’d anticipate in the red zone last year, and he might be incentivized to factor in Arnold simply based on his size (6’5″). Even if that doesn’t necessarily correlate to production, having that size and athleticism surely encourages coaches to give players like him opportunities, and explains why he got a multi-year contract despite a relatively limited track record. Ian Thomas ran 363 routes last season, and if Arnold doesn’t have to be in a committee, he’s a interesting candidate to end up as a sleeper tight end and top-20 player at the position.

All Statistics via Pro Football Reference and Player Profilier

Like these tight end sleepers? For more Rankings and Analysis please check out our full 2021 Fantasy Football Draft Kit.