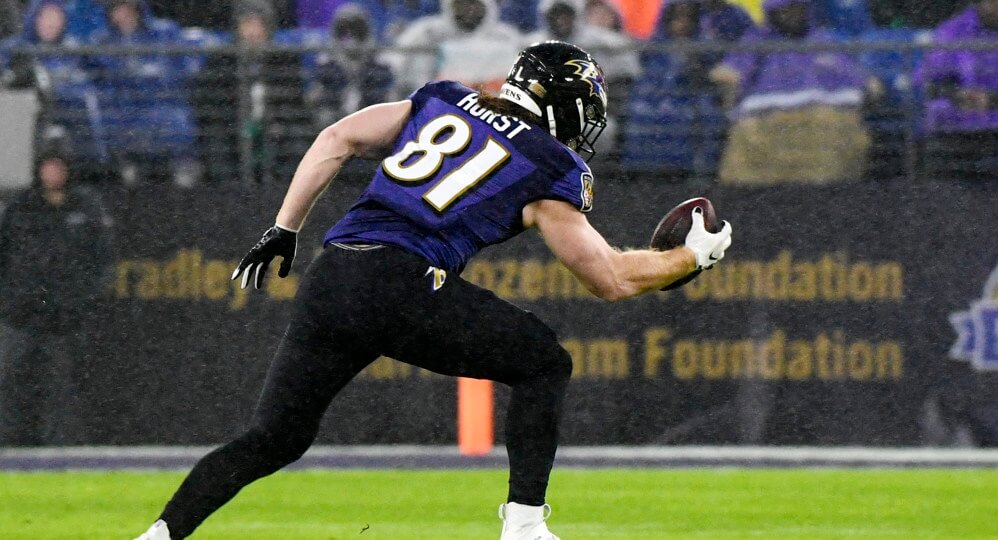 The Atlanta Falcons traded a second and fifth round pick to the Baltimore Ravens to acquire Hayden Hurst in the offseason. The Ravens drafted Hurst in the first round of the 2018 NFL Draft, which was the same draft where they drafted breakout tight end Mark Andrews two rounds later. In Hurst’s first two seasons, he’s totaled 43 receptions, 512 receiving yards, and three total touchdowns. Former Falcons tight end Austin Hooper signed with the Cleveland Browns which means there are available opportunities and targets for Hurst.

First let’s take a look at the tight end targets and trends over the last four seasons. Then we’ll look at available air yards in the Falcons offense coming into 2020.

So we can see an uptick in total targets to tight ends, Hooper’s targets, and pass attempts by Matt Ryan from 2016-2019. With Hooper gone, there’s quite a few tight end targets available for Hurst. There’s a Rotoworld article by John Daigle showing the available targets and air yards in 2020 and the Atlanta Falcons are first with 258 targets available. If Hurst could get 80-90 of the available targets, then we could see a breakout year for him in a pass-heavy offense.

Why Hurst is one of our tight end sleepers

The Falcons ranked first with 42.8 pass attempts per game and finished 30th with 22.6 rush attempts per game. They did add Todd Gurley in the offseason, but Gurley and Hurst can both be productive in this offense. When looking at sleeper pass catchers, target volume is key and the Falcons have a ton of available targets with an increased trend towards targeting tight ends. Hurst’s 148 Fantrax ADP makes him the 19th tight end drafted and that’s an amazing value for a potential TE-1. He’s my top 2020 tight end sleeper candidate.

Last year as a rookie, T.J. Hockenson ended with 59 targets, 32 receptions, 367 receiving yards, and two touchdowns in 12 games. He received a 14.1% target share that ranked 20th and ranked 16th with 11.5 yards per reception. If he played a full season, his full season target pace would’ve ranked him top-12 amongst tight ends. Those metrics might not jump off the page, but not many rookie tight ends dominate right away. Let’s not forget that the Lions drafted Hockenson at the eighth overall pick in the 2019 NFL Draft, so they’re invested.

In four games where Hockenson received six or more targets, he totaled 16 receptions, 255 receiving yards, and one touchdown. About half of that production came in week one when he burst onto the scene with six catches, 131 receiving yards, and one touchdown. Fantasy owners probably blew a ton of their FAAB after week one if they didn’t already draft him. Although we’d like to see the target share higher, Hockenson’s the third option behind Kenny Golladay and Marvin Jones.

Why Hockenson is a Tight End Sleeper Candidate

The Lions ranked middle of the pack (16th) with 35.7 pass attempts per game and that’s pretty close to Stafford’s 36.3 pass attempts in the eight games played. Last year, the Lions’ defense ranked in the bottom of the league in terms of yards allowed and opponent points per game. A terrible defense means negative game scripts and likely more pass attempts coming into 2020.

Hockenson played in 12 games last year and in four games his quarterbacks were David Blough and Jeff Driskel since Stafford missed the final eight games. Be patient with talented young tight ends like Hockenson. Let’s also note he’s coming back from an ankle injury, so keep an eye on his health coming into the season. If there are reports of him missing time to start the season, then his ADP will drop even further. He’s currently being drafted as the 14th tight end with a 127 Fantrax ADP, and Hurst and Hockenson are both sleeper tight ends.

The last two tight end sleepers were in a more pass-friendly offense, but I still like Jonnu Smith as a tight end sleeper. Last season Smith received 44 targets, 35 receptions, 439 receiving yards, and three touchdowns. For the first seven games of the season, Delanie Walker was active and taking away targets and catches. However, Walker’s no longer there and Smith’s the lead tight end on the Titans offense. If you add up Walker’s and Smith’s 75 targets, then it would’ve finished right outside the top-12 at the position.

With limited targets, Smith ranked 8th with 12.5 yards per reception and 2nd with 9.8 yards per target. He ranked 8th with 277 yards after the catch and 3rd in receiver separation on Next Gen Stats. We know the Titans have a low volume pass offense as they ranked last with 26.9 pass attempts per game. However, if we go back to the available targets, there are over 100 available for the Titans pass-catchers coming into 2020.

Why Smith is a Tight End Sleeper Candidate

So I’m not saying Smith will take a massive step up in target volume, but it’s safe to project an increase in target volume for an efficient and explosive tight end. Smith’s 135 Fantrax ADP has him as the 17th tight end drafted. Another value pick at tight end that could work his way up the rankings into the 12-15 range.

Kaden Smith’s more of a watch list or deep league sleeper tight end. He’s a backup tight end on the Giants behind often injured Evan Engram. In the 2019 NFL Draft, the San Francisco 49ers drafted Smith in the 6th round and then the Giants acquired him off waivers last September. In seven games last year, he finished with 42 targets, 31 receptions, 268 receiving yards, and three touchdowns.

Engram played in weeks 1-9 and missed the rest of the season, and then from week 10 on Smith took over most of the snaps and targets. In four games, he finished in the top-10 and finished top-5 in three of those weeks. That’s pretty good production from a deep sleeper in Engram’s absence. Smith’s the 43rd tight end drafted with a 578 Fantrax ADP, so again more of a watch list guy. Keep an eye on him since Engam’s missed more games each year he’s been in the league.

Check out the rest of our Fantasy Football Sleepers and Busts for the coming season.

You got your sites set on any tight end sleepers Corbin didn’t mention? Let us know in the comments below. Don’t worry, we promise not to share them with anyone in your league!