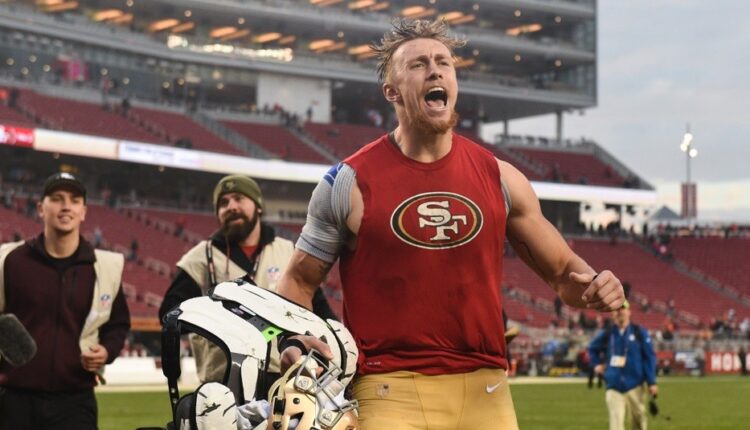 It feels weird to not have Rob Gronkowski in the fantasy football tight end rankings. He’s only been the consensus number one for what seems like forever. Gronkowski was pre-ranked as TE1 and pick 2.09 on average in 2018, only to finish as TE11 in PPR formats. It was one heck of a run as he’ll go down as one of the best tight ends to ever play in the NFL. For years, there was Gronk and then everybody else. You’d think with Gronk gone, the tight end position would be viewed as an even bigger pile of garbage, but it’s better than ever.

There are a number of very talented tight ends who could play the part in a fantasy football title and it starts at the top with Travis Kelce, Zach Ertz and George Kittle. All three are going within the first 30 picks after record-setting seasons. Kelce set the record for the most yards (1,336) by a tight end, only to see Kittle break it an hour later with 1,377. All Ertz did was catches 116 passes – the most ever by a tight end. They are the consensus top three in the tight end rankings. I personally won’t go there. They can only disappoint as there will likely be some regression from all three.

Zach Ertz was the third tight end off the board below, despite finishing as the second-ranked TE in 2018. Ertz had three very similar seasons in a row where he had at least 816 yards and 74 catches, before breaking out for 1,163 yards on 116 grabs. His 156 targets were the most at the TE position and the sixth most overall. There are a lot of mouths to feed in Philadelphia, but make no mistake, Ertz is Carson Wentz’s number one target. This is especially true in the red zone. Fifteen of Ertz’s 16 touchdowns over the last two seasons have come inside the RZ. His seven last year were the fourth most in the league and his eight in 2017 were the third most.

George Kittle went from 43 catches, 63 targets, 515 yards with two touchdowns as a rookie to 88 catches, 136 targets, 1,377 yards and five touchdowns as a sophomore. There were times last season where the 49ers only had Kittle to throw the ball to. His targets will likely go down with the additions of Deebo Samuel and Jalen Hurd, plus the emergence of Dante Pettis.

It’s fine to leave your draft with Kelce, Ertz or Kittle as they are on a tier of their own. My strategy on drafting tight ends has always been the same and that’s to wait it out until the middle or later rounds. What we want to do on draft day is find this year’s breakout tight end and that’s exactly what we did in 2018 with Ertz and Kittle as we loved their ADP and opportunity in the red zone. Kittle now sits third in my 2019 tight end rankings after an ADP of 133 (TE 13) last season.

Here’s a look at my latest mock draft put on by our very own Nate Hamilton. This will give you a feel of where tight ends may go in drafts and where to dive into tier two. The tight ends are the lighter orange in the table. 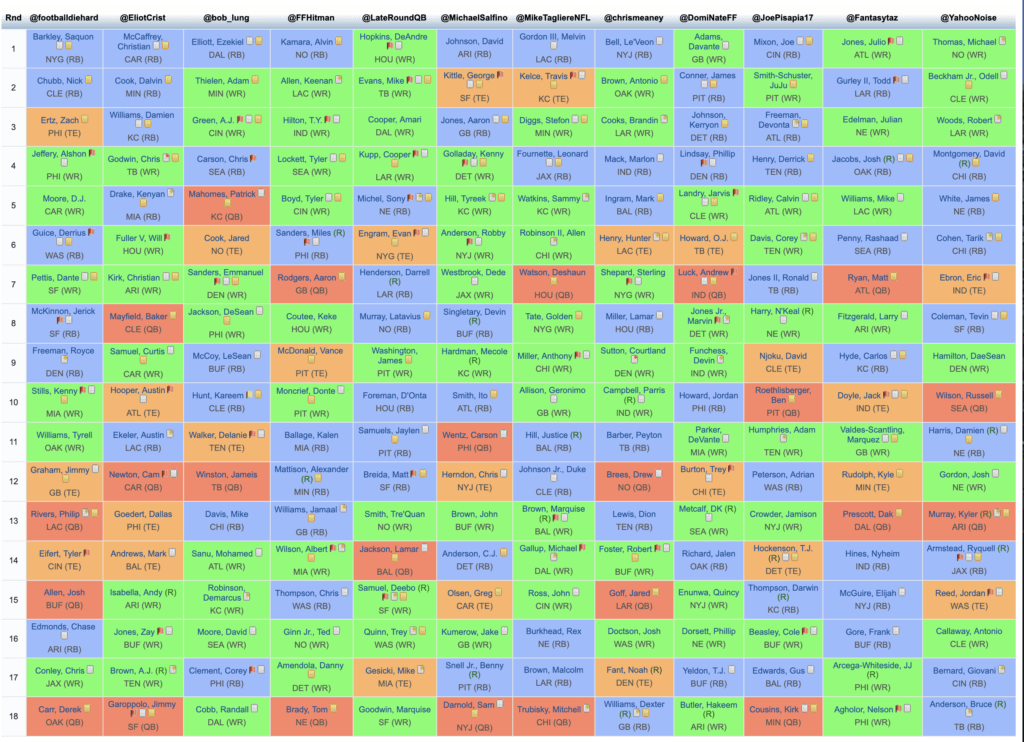 Before we get to the full tight end rankings, let’s take a look at a few tight ends that I value significantly higher or lower than current ADP. Some of my targets include Zach Ertz, Evan Engram, O.J. Howard, Hunter Henry, David Njoku, Vance McDonald & Chris Herndon.

I’m fine with where Eric Ebron is going (TE7) as that’s where I have him in my tight end rankings. That doesn’t mean I’m going to draft him as there’s no way he scores 14 touchdowns again. He’ll be a red zone threat again and if he just scores seven he’ll likely return value. He was free last season, though, and that’s how I like my tight ends. Remember Gary Barnidge and his breakout season? Free! Once O.J. Howard, Evan Engram, and Hunter Henry are gone…it turns into a waiting game for me.

There’s better value with Jack Doyle than Ebron. It was Doyle who played more snaps, ran more routes and received more targets when both were active. It was definitely Ebron who received the work in the red zone and there’s something to be said about that, but the Colts were busy in the offseason. They added Parris Campbell, Devin Funchess, and Deon Cain should be ready to debut this season. Maybe you just take the cheaper player.

I may move Dallas Goedert ahead of aging Jimmy Graham and Greg Olsen as we get closer to the season. It’s possible we’re talking about Goedert as TE1 in the future, but he’s nothing more than a best ball guy for now. He has a ton of skill and would be a TE1 on 15-20 different teams, but he’s a backup. He’s a great handcuff to Ertz in super-deep leagues, but he shouldn’t be viewed as a TE1. I truly believe Goedert will improve on his numbers and be used more in year two, but you can’t start him in 12-team leagues.

Mike Gesicki will go undrafted everywhere and he probably should be. I have a feeling, though, we’ll be talking about him this season. Whether it’s in the DFS community, a dynasty setting, season-long format or best ball league. Gesicki only had 22 catches on 32 targets for 202 yards and he failed to find the end zone as a rookie. Those kind of numbers you leave on the wire, but there should be a bump in year two with little competition for targets. He’s already feeling it as he’s becoming more and more part of the offense.

Evan Engram – With the Golden Tate suspension and Sterling Shepard injury, Engram is the clear cut No. 4 TE off the board for me.

Chris Herndon – Herndon will still be a target of mine in deeper formats, but he’ll miss the first four games of the season and it hurts to carry two TEs in standard formats.

Are you onboard with Chris’ Tight End Rankings for PPR? For more great rankings, sleepers, and analysis check out the 2019 Fantrax Fantasy Football Draft Kit.

Fantasy Baseball Waiver Wire: The Attack of the Gingergaard