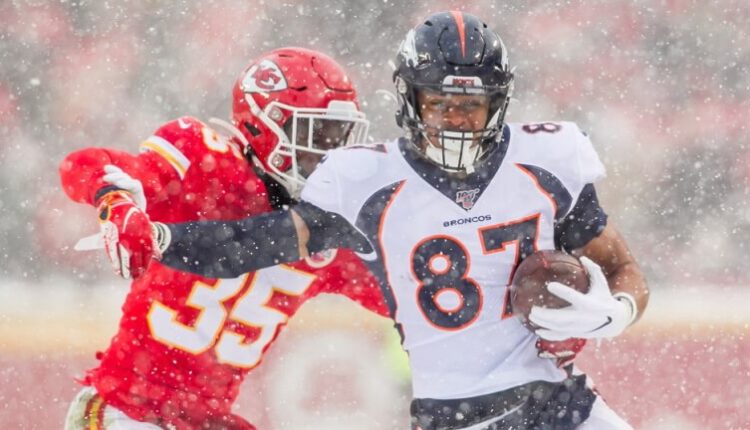 Travis Kelce is the unanimous TE1 followed by Darren Waller and George Kittle for the upcoming season.  Kelce scored 57.4 more fantasy points than Waller last year and a whopping 118.5 points more than the TE3 in half-PPR formats.  There are a few strong cases for who belongs in the remainder of the Top-5 at tight end and who could round out the Top-10. For the most part, we’ll take what we can get at the tight end position as consistency in top weekly rankings is rare. That being said, what follows are the tight end busts to try and avoid counting on as top-tier starters in 2021.

Fant started out the 2020 season looking like the next big thing at tight end.  In his first two games, he caught nine passes for 138 yards and two touchdowns.  He was the TE3 in half-PPR formatting and seemingly on a roll.

From Week 3 on, however, Fant caught an average of just four passes, for 41 yards per game, and only scored once more the rest of the way.  He saw approximately six targets per game last season which was tenth among the position.  Most chalked up his struggles to inconsistent quarterback play and nagging injuries as he finished as TE14 on a points per game basis.

Not only is wide receiver Cortland Sutton returning from injury ahead of this season, but there are plenty of mouths to feed with Jerry Jeudy, KJ Hamler, and Tim Patrick on the roster as top Bronco pass catchers.  Not to mention there is a less than ideal positional battle at quarterback between Drew Lock and Teddy Bridgewater.  For these reasons, I question Fant’s ability to take the next step forward in this offense.  A fine option, but don’t reach too early expecting too much.  He is a leading tight end bust candidate in fantasy football at his current TE7 ADP.

Gesicki finished as TE7 in total points and TE9 on a points per game basis last season.  While not quite the full breakout season some came to expect, Gesicki was at his best yet eclipsing 700 receiving yards on 53 catches and finding the end zone six times.

In Tua Tagoviola’s first four games as a starter last season, Gesicki only logged a total of 133 yards on 10 catches and failed to score a touchdown.  However, in the final four games of the season, Tua and Gesicki connected for 23 receptions, on an encouraging 34 targets, for 254 yards and three touchdowns.

With Tua set to start in 2021, and Gesicki acting as his top target at the tail end of 2020, he has cracked the top-10 in pre-draft tight end rankings.  Unfortunately for him, the Dolphins signed deep threat Will Fuller this offseason to compliment Devante Parker on the outside.  They also spent the sixth overall pick on Tua’s former teammate, wide receiver, Jaylen Waddle.

Gesicki seems likely to finish as a touchdown dependent tight end bust this season for fantasy football.  His 6’6” 247 pound frame will remain an asset in the red zone, but he has too much competition for targets on this roster.  He will be more useful to the Dolphins than to your fantasy football team.

The New England Patriots have not had a fantasy-friendly tight end since Rob Gronkowski was in Foxborough.  Furthermore, Cam Newton has not supported a top fantasy football tight end since Greg Olsen when he finished as TE4, then TE2, in 2015 and 2016.  Now, the Pats not only added Hunter Henry this offseason, which many expected them to do, but also signed Jonnu Smith.

In 2020, Henry and Smith both finished in the top-12 at tight end, as TE9 and TE11, on the Los Angeles Chargers and Tennessee Titans respectively.  Some fans can’t help but compare these two together to the 2011 Patriots offense with Gronkowski and Aaron Hernandez in dominant 12-personnel sets.  Those two combined for 169 receptions, 2,237 yards and 24 reception touchdowns.  It should go without saying that won’t happen in 2021.

The Patriots only threw the ball on 44% of their offensive plays last season.  Even when they did, when Cam Newton was under center, he just didn’t look good.  He only passed 261 more times than he ran and only managed to throw eight touchdown passes.  While Henry and Smith are necessary upgrades to the offense, each would be better off without the other on the same team.  They are both likely to be tight end busts as they will be hard to predict when to plug into your starting lineup any given week.