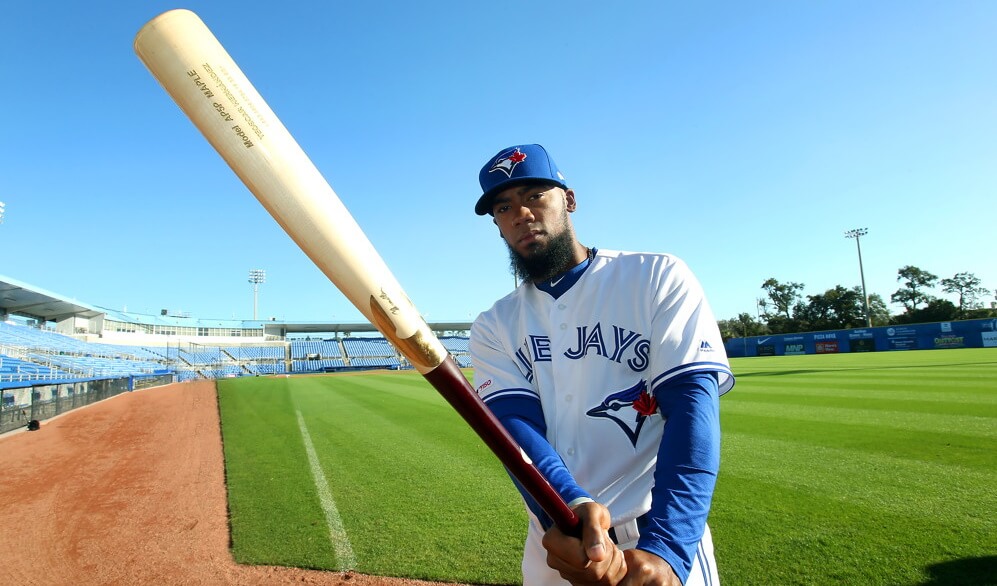 The long time statcast darling, Teoscar Hernandez, finally took the next step forward in 2020. Hernandez has also shown the ability to hit the ball hard, and many leaned on that by buying into him before the 2020 season. Those that bought him at his 332 ADP were rewarded as Hernandez finished as the 28th ranked player in standard 5×5 leagues.

Skip forward to early 2021 drafts, and Hernandez has an ADP of 67.7 and has the Fantasy Baseball community split on whether he is worth the draft price? Can he repeat his strong season where he slashed .289/.340/.579 with 16 home runs and six stolen bases in 209 plate appearances? Let’s dive into his profile.

Teoscar Hernandez: What Should We Expect In 2021?

The biggest issue in Teoscar Hernandez’s profile has always been his swing and miss and the ability to hit for average. He finally did that in 2020 by posting a .289 batting average, which was by far the highest mark of his career. In the previous two seasons, he hit .239 and .230, respectively. Where did the .289 come from? Was it merely a hot two-month stretch, or can he sustain it over a full season?

He also hit the ball to all parts of the field better than ever. Hernandez pulled the ball significantly less but still showed the ability to hit to all fields. Factor in an increased hard-hit rate, and there are plenty of reasons why Teoscar Hernandez posted a high batting average in 2020.

While the batted ball data looks great, Teoscar Hernandez has an atrocious plate discipline profile. This is no surprise based on his high strikeout rate, but he often fails to make contact. His 66.2 percent contact rate was the 11th worst among qualified hitters last season. The 15.7 percent swinging-strike rate was good for 14th worst among all hitters. His zone contact rate is also scary, as it falls among the league’s worst.

The reality is, Hernandez has a ton of swing and miss in his game, which directly correlates with his low contact rates. This will always hinder his ability to hit for a high average over a full season. One final discouraging stat is Hernandez’s low zone swing rates. He sees plenty of first-pitch strikes and should be more aggressive early in counts.

Teoscar Hernandez has hit the ball extremely hard throughout his career, so it is not much of a surprise to see him hit 16 in 50 games in 2020. His pace over the full season was 43, right in line with his 42 that he has hit over his actual last 162 games. When Hernandez makes contact, he makes excellent contact that leads to home runs.

Hernandez has an impressive 13.8 percent career barrel rate for his career but upped that number in 2020 to 18 percent, which was at the top of the league. Barrel rate has both the strongest descriptive and predictive correlation with home runs. If Hernandez can continue to barrel the ball at a high rate, he should continue his high home run output.

Max exit velocity is a good indicator of how hard a player is capable of hitting the ball. Hernandez is capable of hitting the ball harder than almost every player in the league. He also hit the ball on average harder than nearly every player in the league. Posting a 98.2 mph exit velocity on line drives and fly balls again helps explain his strong home run output. This is something that I would expect to continue moving forward, as Hernandez is just 28 years old and has historically hit the ball very hard. 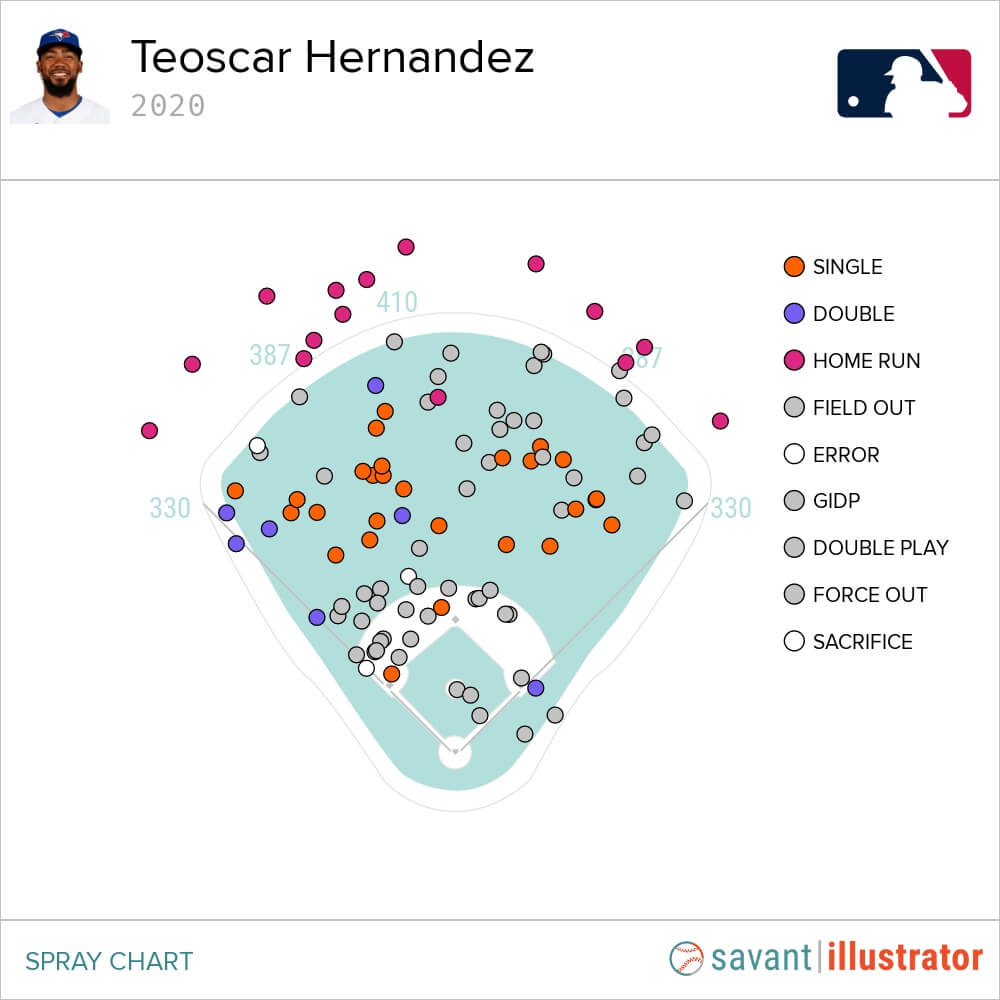 When you look at a big power threat that stands 6’2, 205 pounds, you may not see a threat to steal bases. But in 2020, Hernandez stole six bases in just 50 games. It was tied for a career-high, which he also hit in 2019, but regardless, Hernandez is more than capable of stealing bases.

From a team standpoint, the Blue Jays seemed more committed to stealing bases in 2020, as they stole the ninth most in baseball. If Hernandez gets the green light to run, he could steal at least ten bases in 2021.

Teoscar Hernandez is currently projected to hit clean-up for the Blue Jays, according to Roster Resource. The lineup will likely only get better with time, as it is stacked with young studs. They also have plenty of talented prospects waiting in the wings and could be in a position to sign some solid free agents.

Regardless, if Hernandez can stick in the middle of the Blue Jays lineup, he should have a great chance to accumulate many runs and RBI. I would not be surprised to see him eclipse 90 in both categories.

At first, I did not believe that Teoscar Hernandez was legit. He has gone on hot streaks before but has never produced over a full season. These are all things that I believed before diving into his profile.

In this shortened 2020 season, Hernandez slashed .289/.340/.579. His counting stats were also extremely good with 16 home runs, 33 runs scored, 34 RBI, and six stolen bases. In standard 5×5 leagues, Teoscar Hernandez was the 21st most valuable player in Fantasy Baseball, according to Razzball player rater. It was an excellent 2020 season for the Blue Jay’s outfielder, who just turned 28.

Yes, there are plenty of swing and miss concerns in his game. He strikes out a lot and makes below-average contact. While these things are not great, he made notable changes in his approach at the plate in 2020, leading to success.

Here is what stood out to me when diving into Hernandez’s profile. First, it is how good he has been over his last 162 games. In 620 plate appearances, Hernandez has produced 42 home runs, 85 runs, 94 RBI, and 11 stolen bases, with a .252 batting average.

So, Teoscar Hernandez was excellent in 2020 and has been solid over his last 162 games. His early ADP sits at 68.65. If you are willing to gamble on the upside, he is worth the pick. Hernandez just turned 28 and is entering the prime of his career. He hits the ball extremely hard, and all of the statcast data supports his outstanding season. There are plenty of reasons to believe Hernandez could continue to build on his 2020 season in 2021.

If you are interested in other breakout hitters from 2020 that our FantraxHQ staff believes in, give this article a read.