Streaming Defenses is the Only Way to Fly 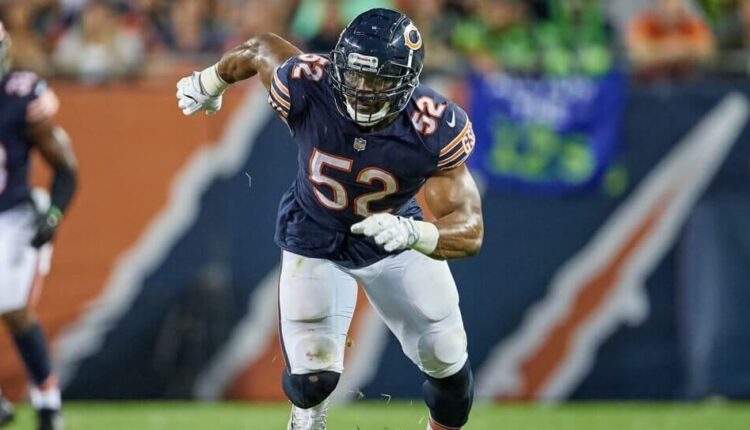 Gary Davenport contemplates whether you can draft a fantasy defense before the final two rounds and gauges the merits of streaming defenses to optimum effect.

It happens to all of us at one time or another. You’re sitting in the eighth or ninth round of a fantasy draft. None of the wideouts or running backs really turn your gears. The quarterback you’re targeting will likely be available two or three rounds from now. You’ve already drafted a tight end.

And so, your mind starts drifting toward possibly doing things a little differently. You look at the Chicago Bears defense and imagine the edge that having such a formidable unit might afford your team over the owners who wait until the end of the draft to take a defense.

The next thing you know, you’ve pulled the trigger on taking a defense relatively early—and in doing so shot your team right in the foot.

Drafting a Team Defense Early is a Mistake

It can be tempting to target a formidable team defense like the Bears. After all, Chicago ranked third in the NFL last year in total defense, first against the run, seventh against the pass, first in scoring defense, first in takeaways and third in sacks. All told, it added up to a clear first-place finish in fantasy points.

That’s the smallest gap between the top weekly starter and the last one of any fantasy position that isn’t the kicker.

The five-year average in difference between the No. 1 defense and No. 12 defense is even less impressive—just 3.1 fantasy points per game. Again, only kicker has a smaller gap between front end and back.

Reaching for that top defense will get you about three fantasy points per game over the 12th defense, and next to nothing over the second and third. The so-called “edge” gained in minuscule.

And that assumes that you actually hit on picking the No. 1 defense in your draft. Per ADP data at Fantasy Football Calculator, the Bears weren’t the first defense drafted on average in 2018. Or the fifth. The first defense off the board was the Jacksonville Jaguars, who finished atop the scoring in 2017.

Those Jaguars finished the 2018 season 19th in fantasy points. There hasn’t been a single team repeat as the No. 1 fantasy defense two years running in the 21st century. Not one.

Team defenses are much more subject to yearly variance based on personnel, coaching and scheme changes. Those Bears have a new defensive coordinator in 2019 in Chuck Pagano and a revamped back end. Also, many of the statistical categories that net team defenses fantasy points (like takeaways and touchdowns) are inherently fluky stats that fluctuate wildly.

Using a relatively early pick on a defense is wasted draft capital usually spent chasing numbers from the year before—a pick that could be much better spent on depth or upside at another position. Players like Green Bay wideout Geronimo Allison, Redskins running back Adrian Peterson or Denver wide receiver Courtland Sutton. All have an ADP higher than the Bears in 2019.

Streaming Defenses is the Smart Play

However, just because you don’t squander draft capital on a high-end team defense doesn’t mean you can’t still get high-end production from the position. As a matter of fact, you can cobble together a top-five fantasy defense with a minimal draft-day investment. You can quite literally have your cake and eat it too.

As fantasy football concepts go, streaming defenses isn’t a complicated one. Toward the end of the draft, target a defense that begins the season with a favorable matchup or two against teams that struggled offensively the year before. When those favorable matchups dry up, simply swap that team out for another defense on the waiver wire and keep playing matchups all season long.

Is it a foolproof strategy? Of course not—there’s no such thing. Odds are good that more than one team in your league will be streaming defenses, so the best matchups will be in demand on the waiver wire. It can also be a bit tricky to spot the most favorable matchups early in the year—a lot can change in the NFL in a year, and what looks like a good matchup on paper may not be in practice.

By the end of September, we’ll have a better feel for the 2019 iterations of the NFL’s teams on both sides of the ball, but these defenses all have good matchups early in the year and an ADP outside the top-10 at the position.

Top Streaming Defenses for Weeks 1 thru 4

Philadelphia Eagles (vs WAS): The Redskins allowed the seventh-most fantasy points to defenses last year and could be starting a first-year quarterback in the season opener.

Cleveland Browns (vs. TEN): The Browns made a number of improvements defensively in the offseason and open the year against a Titans offense that isn’t scaring anyone.

Kansas City Chiefs (at JAX): The Chiefs lived on big plays defensively last year, and the Jaguars gave up their share. This one is admittedly a gamble given the wholesale changes to both teams.

Buffalo Bills (at NYG): The Bills actually have a good matchup in Week 1 with the Jets as well, making them a good two-week streaming target that will likely be there for drafters in the final round.

Cleveland Browns (at NYJ): Yes, the Jets made offensive improvements in the offseason. They also surrendered the sixth-most fantasy points per game to defenses in 2019.

New England Patriots (at MIA): The Patriots get six games among AFC East tomato cans that all ranked inside the top-six in FPPG allowed to team defenses a year ago. This one’s just the first.

Kansas City Chiefs (at OAK): If the Chiefs pan out against Jacksonville you might as well hang onto them—they walloped the Raiders 35-3 when last these teams met in Week 17 of last season.

New England Patriots (vs. NYJ): Do I think the Jets will be better offensively in 2019? Maybe. Do I think they’ll get hammered in Foxborough by the Patriots in Week 3? Oh yeah.

Philadelphia Eagles (vs. DET): The only obstacle to the Eagles being a good three-week streaming play to open the season is a Week 2 trip to Atlanta. Unfortunately, that’s a whopper of an obstacle.

Cincinnati Bengals (at BUF): Given how bad the Bengals were defensively last year, this isn’t a play for the faint of heart. But Josh Allen was prone to turning the ball over as a rookie.

Carolina Panthers (at ARZ): The Panthers have a history of fantasy production on defense, and no team was friendlier to defenses in 2018 than the Cardinals.

Atlanta Falcons (vs. TEN): The Falcons actually have quite a bit of talent on defense. That defense was just ravaged by injuries last year. At home against a shaky Titans offense, they should eat.

New England Patriots (at BUF): At the risk of going full-on broken record, the New England defense should benefit greatly from playing in the AFC East. This is the third solid matchup in a row.

Seattle Seahawks (at ARZ): By Week 3 we should know if the Seahawks can rush the passer—and if the Kingsbury/Murray-led offense in the Valley of the Sun is legit.

Indianapolis Colts (vs. OAK): With talent at all three levels of the defense and Justin Houston now on the team, the Colts are primed for a big step forward defensively.

Is Streaming Defenses in your fantasy bag of tricks? For more from Gary and all of our football crew head on over to the 2019 Fantrax Fantasy Football Draft Kit for more great strategy, analysis, and rankings.

Should You Be Targeting Damien Williams in Fantasy Football?