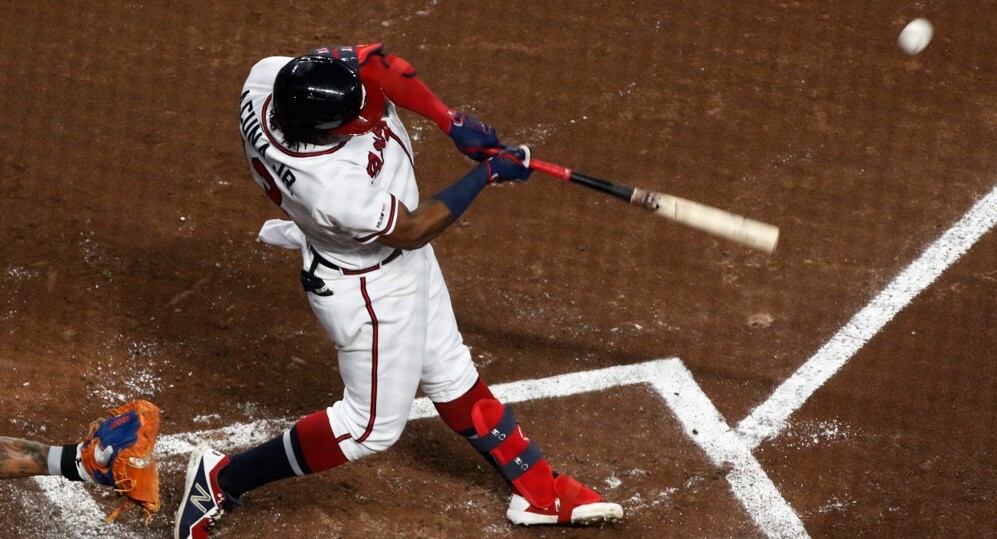 Check out the graphic below. On the left, you will find all of Acuña’s swings for his career and then on the right, is just 2021. The improvement on chasing pitches is legit. He has been much more selective in 2021. Acuña’s teammates spoke highly of his plate discipline for his age in the past, but what Acuña has done in 2021 sets him apart. 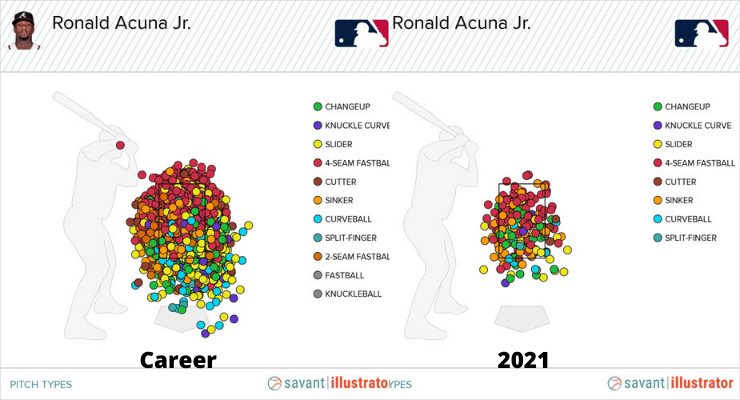 As good as Acuña has been over the last several years, he has gotten even better. Acuña’s statcast data is off the charts and he is hitting the ball harder than ever. A 40/40 season is a real possibility if he can stay healthy, and the gains in plate discipline could lead to a batting average close to .300.

Ryan McMahon has enjoyed a breakout season to start 2021. He currently has nine home runs and a .816 OPS through 163 plate appearances. McMahon has made gains in the contact department that have led to a decreased strikeout rate. Last season, he struck out 34.2 percent of the time and had a career strikeout rate of over 30 percent to begin 2021. This season, McMahon has cut that number to 20.9 percent, a significant difference.

The recipe for success for McMahon is simple. Sustain the gains he has made in the contact department and keep his strikeout rate near 20 percent. He can easily eclipse 30 home runs and keep a serviceable batting average if he can do that.

Tommy Edman is far from a standout player, but he has made some improvements this season that should lead to better performance. His strikeout rate has dropped over 10 percent. Edman’s contact rates have also made strides as his overall contact rate is up over six percent, and his zone contact is up three percent and among the league-best.

Edman has just two home runs and a pedestrian .265/.321/.359 slash line. The positive news is he has stolen seven bases and looks like he could run laps around his career-high of 15.

Edman is making more contact but not getting great results. His BABIP is .030 points lower than his career average. Edman has also posted a career-high max exit velocity of 112.9 mph, nearly three mph above his career-high. If he begins to hit the ball a little harder more consistently and has more BABIP luck come his way, he could be in for a career season. With the high contact rates sustaining, Edman should hit above .275 rest-of-season and eventually gain more home run power. If someone is willing to sell Edman cheap in your league, I would buy even if he provides steals and solid batting average the rest of the way.

Brandon Belt has long been known as an OBP darling for fantasy but has never been a huge asset for fantasy owners. Belt has seemingly sacrificed contact for power this year. He has eight home runs through just 125 plate appearances but has also seen his strikeout rate jump by nearly 12 percentage points. The biggest issue is his swing and miss on pitches in the zone. Belt’s zone contact rates have fallen from 86 percent last season to 79.2 percent this season. His swinging-strike rate has only jumped one percent, which is an encouraging sign that his strikeout rate could drop. Belt has been called out on strikes on more pitches out of the zone than any hitter in baseball, according to Baseball Savant. This could lead to a decreased strikeout rate moving forward.

For now, Belt remains a better asset in deeper OBP leagues. But, if his strikeout rates improve and the power sticks, Belt could be in for a career season.

Trea Turner’s strikeout rate may have jumped since last season, but his production certainly hasn’t. Turner picked up right where he left off in 2020 and has dominated his way to a .329/.369/568 slash with nine home runs and seven stolen bases.

The production seems here to stay for Turner, who has cemented himself as a first-round caliber player year in and year out. It even looks like a strong possibility we see Turner’s strikeout rate dip closer to 15 percent due to a low swinging strike rate. Turner has actually been called out on strikes five times on pitches out of the zone, according to Baseball Savant, which places him near the top of that leaderboard. 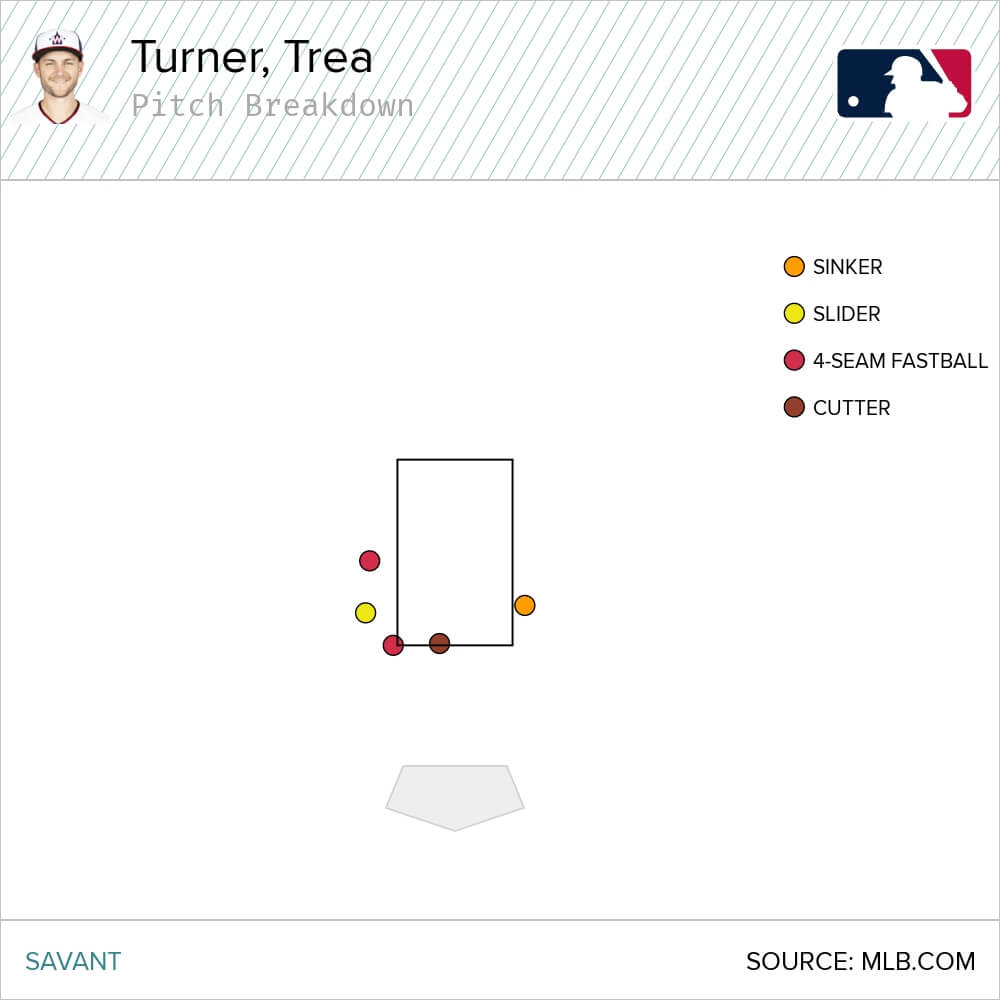 Given those reasons, I expect Turner’s strikeout rate to drop, even though the production has been elite despite his 20 percent strikeout rate. Turner’s statcast data is also in line with his career performances. Expect the elite production to continue from Turner moving forward.

DJ LeMahieu, much like Turner, has been a steady source of batting average over the years. LeMahieu also saw a power surge upon moving to New York. He has always been an impressive contact hitter who posts solid batting averages, as you can see by his career .304 average. However, this season, LeMahieu has seen his strikeout rate surge to its highest mark since 2015, and his contact rates drop to the lowest of his career. Consequently, Lemahieu’s batting average is just .272 to pair with three home runs and two stolen bases. Can he bounce back?

The first noticeable thing that pops out is LeMahieu’s swinging strike rate. While it is still an excellent 7.2 percent, it is up three percentage points from last season. Even if this does sustain, we are only talking about a 17.3 percent strikeout rate which is low compared to the league average of 24 percent.

At the end of the day, there is not much to be concerned about with LeMahieu. His skill set is what it always has been. Even if he hits .290 the rest of the way, you will get solid production despite the strikeout rate. If someone is selling low, it’s a great time to buy.

Thanks for checking in on my latest “Statcast Standouts” article. Do you play in an OBP Dynasty League? Be sure to check out my OBP Top-500 Dynasty Rankings.