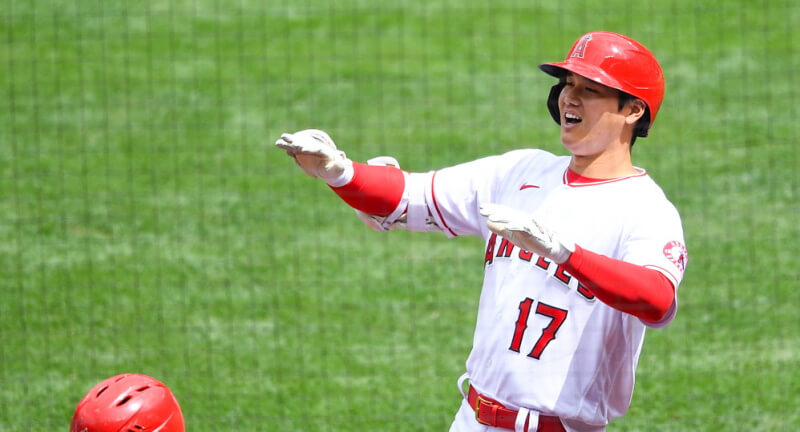 With the rise of statcast metrics over the last five years, average launch angle is a metric people love to discuss. Hitters are constantly searching for the optimal launch angle to maximize their game.

What is Launch Angle?

Simply put, launch angle represents the vertical angle that a ball leaves the bat. The average launch angle is calculated by dividing the sum of all launch angles by all batted ball events. As a general guideline, MLB.com classifies launch angle for different batted ball types as:

In an article by Jeff Zimmerman on Fangraphs, he found the ideal launch angle between 15 and 20 degrees, depending on the hitters’ skillset. Hitters who hit the ball extremely hard like Joey Gallo can get away with a higher average launch angle. But, a hitter with a lower average exit velocity should aim for closer to 15 degrees.

Knowing all of this, let’s look at some players who have seen notable changes in their average launch angle’s in 2021.

Shohei Ohtani might be the story of the year so far. How can you not be entertained with pitches over 100 mph and a max exit velocity reaching 119 mph? Ohtani has been a statcast standout on both the mound and at the plate.

Ohtani has struggled with command on the mound but still has a 35.7 percent strikeout rate and a 2.41 ERA in 18.2 innings. But the biggest story has been at the plate. Through 128 plate appearances, Ohtani has ten home runs, six stolen bases, and a .275/.320/.633 slash line. He has raised his line drive and exponentially raised his fly ball rate, leading to a higher average launch angle. His average launch angle of 18.2 degrees is nine degrees higher than last season. 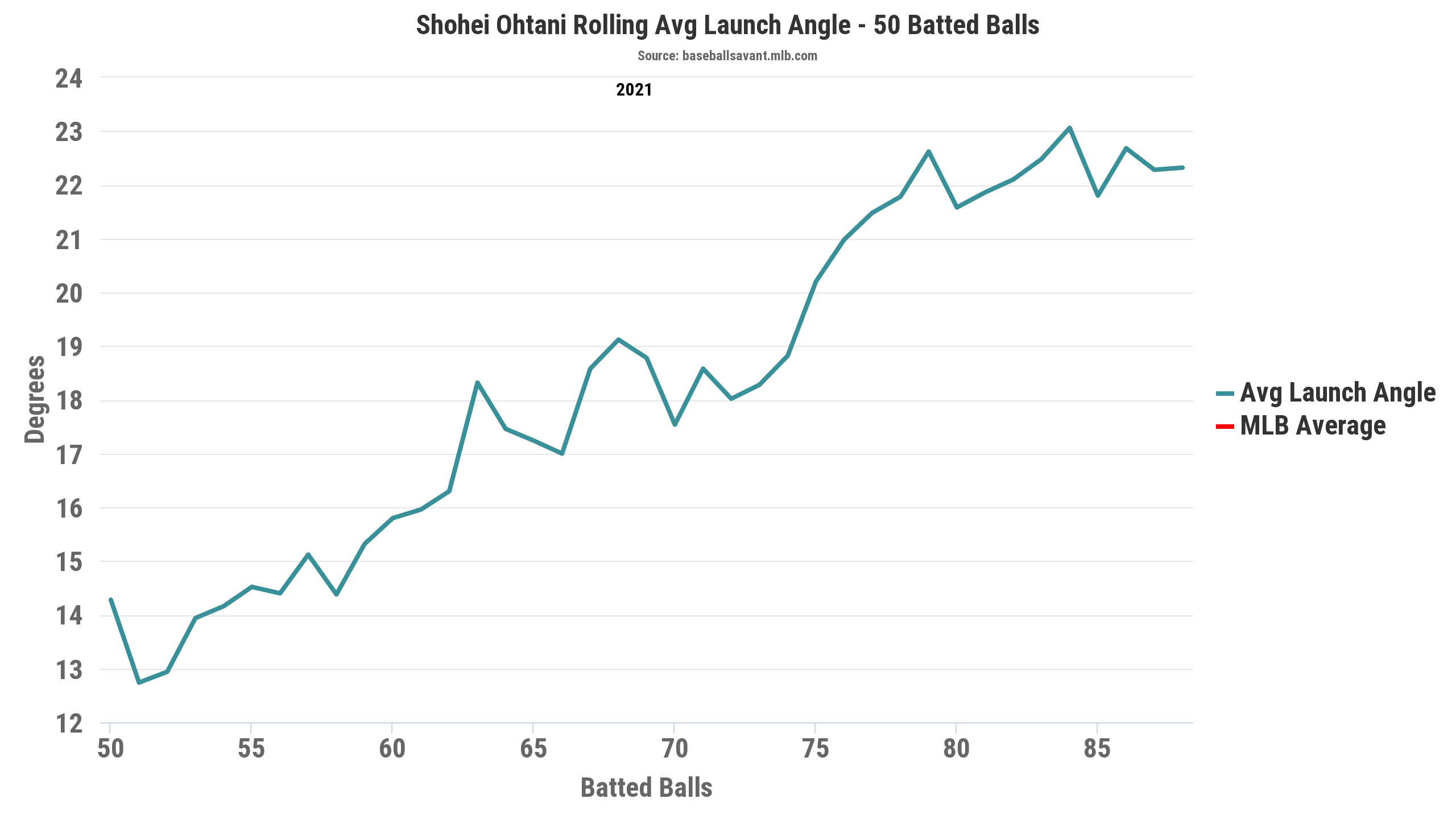 Ohtani getting the ball in the air more often has aided his home run power that we always knew he had. If he continues to keep his average launch angle between 15 and 20 degrees and continues scorching the ball as he has, there is easy 30 home run power here. Throw in his speed, and he could be a 30/15 type player.

Ryan McMahon has enjoyed a mini breakout early on in the 2021 season. He has struggled over the last several weeks but still owns a .262/.309/.500 slash with eight home runs on the season. Much of his success has come from lowering his ground ball rate, naturally seeing an increased average launch angle. The previous career 50 percent ground ball rate has dropped to just 35 percent this year, and McMahon is hitting more line drives and fly balls. He saw his average launch angle increase from 9.4 degrees last season to 17 degrees this season.

McMahon is hitting the ball the hardest of his career and has also cut down his strikeout rate. His expected stats are also much higher than his actual output. As long as these trends continue, I expect McMahon to pick up the pace and post a career season in 2021.

While Jackie Bradley Jr has made positive strides in his batted ball data, the results have not been there. Last season, Bradley posted a 53.1 percent ground ball rate and a 4.4-degree average launch angle. Th1is season, Bradley has seen his average launch angle rise by 11 degrees to a healthy 15.4 degrees. Even his hard-hit rate and average exit velocity have improved since last season. This may leave you wondering why Bradley has just a .179/.243/.330 slash with only three home runs?

Bradley has also found himself on the bench more often, especially against left-handed hitters. While his launch angle gains are encouraging, Bradley will need to perform to continue finding the lineup every day.

It is interesting to see Byron Buxton as the largest faller in average launch angle. Buxton was in the midst of a major breakout season before suffering a Grade 2 hip strain and landing on the IL. Buxton mashed nine home runs in 98 plate appearances and had a slash of .370/.408/.772.

Interestingly enough, his average launch angle is down 14.3 degrees from last season’s 23.6-degree mark. Buxton’s groundball rate is up to 46.4 percent which is up ten percentage points from last season. The good news is that when Buxton hit the ball in the air, he averaged a 101.6 mph average exit velocity.

"We find your lack of faith in Byron Buxton disturbing."

With the increased ground ball rate and decreased averaged launch angle, was regression coming for Buxton? He certainly was not going to sustain his insane pace. But, there will be uncertainty until Buxton returns to the field over the next several months. I believe with Buxton’s gains over the last two seasons, he is more than capable of continuing to perform at a high level. The once failed top prospect has turned into a star.

Joey Gallo was off to a slow start before last week. Of course, I benched him in a weekly lineup league where I have a fairly deep outfield. Gallo hit four home runs over the last six games.

Gallo is who he is at this point in his career. For fantasy purposes, he is going to provide great home run power and solid OBP numbers. On the flip side, he is likely to post a low batting average and strike out at a high rate. He also lives at the top of average exit velocity leaderboards and posts high average launch angles. Usually, Gallo is a statcast darling.

This season, however, Gallo has seen a huge spike in ground ball rate. Up 15 percentage points since last season. His fly-ball rate has consequently dropped nearly 18 percent. Gallo’s home run rate relies heavily on his fly ball rate being high.

Gallo’s rolling launch angle this season is not promising either, but it does seem he is making a conscious effort to hit more line drives. At the end of the day, I think Joey Gallo will be the same Joey Gallo we all know and love. The home run power has come and should sustain, and I imagine his average launch angle will slowly tick back up throughout the season. 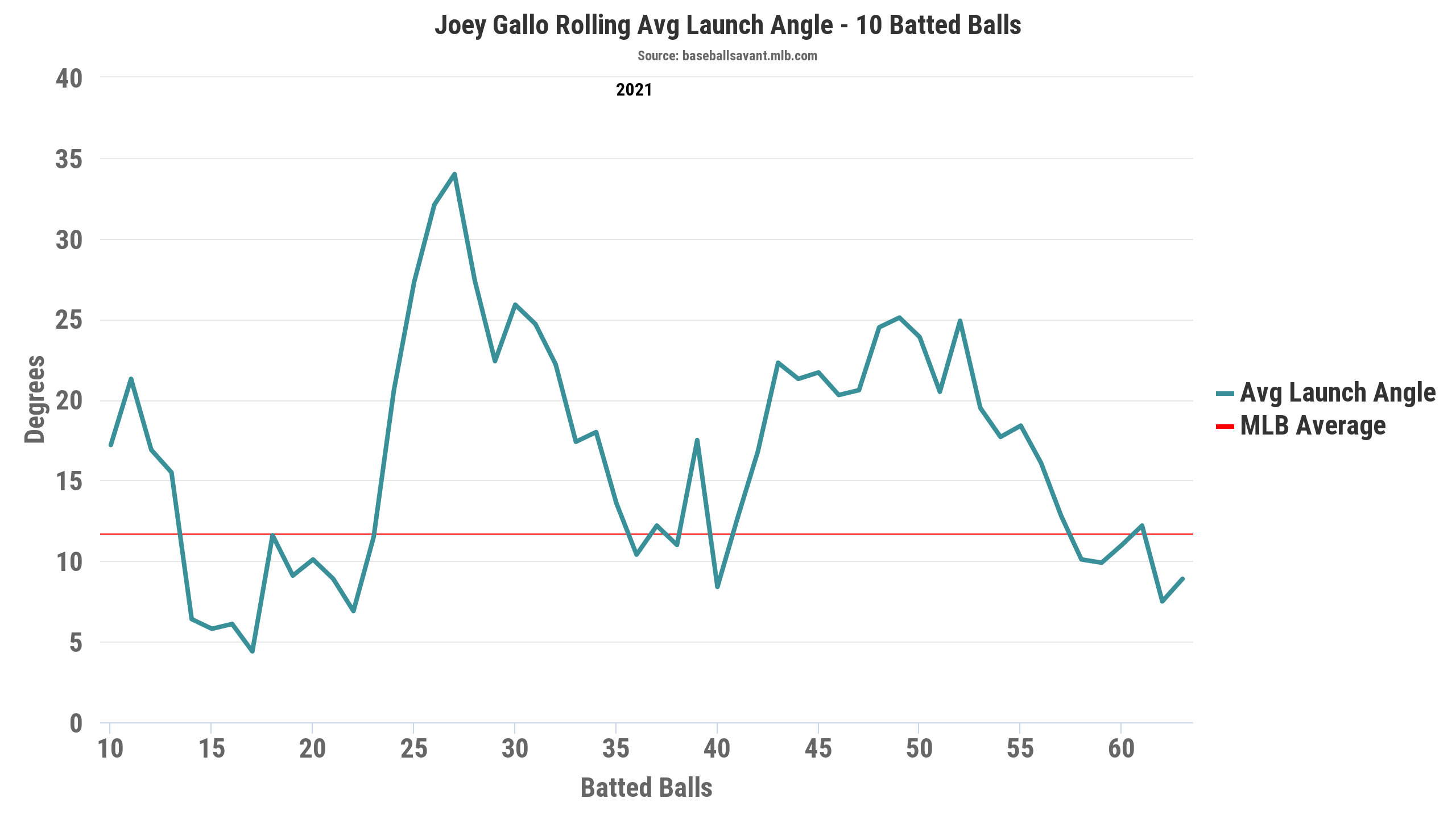 Thanks for checking back in on my weekly “Statcast Standouts.” Be sure to head on over to FantraxHQ’s MLB page to check out all of our great fantasy baseball content to help you win your leagues.