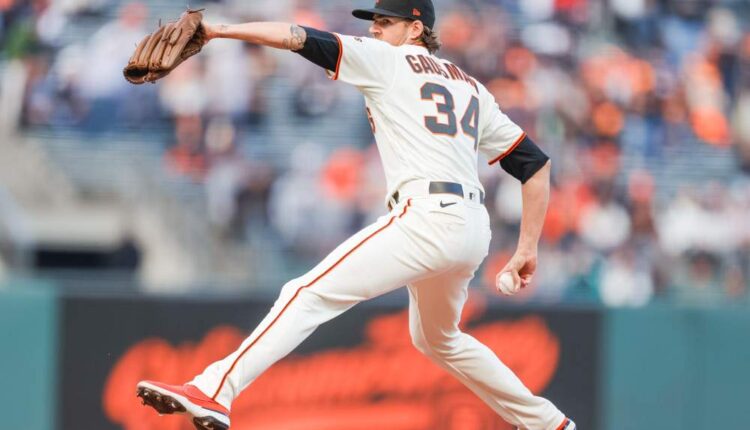 The importance of pitching in fantasy is at an all-time high. Drafting a pitcher in the first round was once mocked and now I’ve seen a RELIEF pitcher taken in the back-end of the first round this draft season. In most 15-team drafts, you’ll see at least two (Burnes and Cole) go in the first with some combination of Buehler, Scherzer, Wheeler, or Woodruff at times as well. With this added importance, it’s become more detrimental than ever to establish a good core or arms to anchor your fantasy pitching staff and avoid some arms that could return a negative ROI. That’s what I’ll be focusing on today with three starting pitchers to avoid at ADP within the top-200 with four more to be cautious about.

For as long as I’ve been a fantasy baseball analyst, I’ve preached caution surrounding “two-pitch” pitchers. Now, it’s not an exact science as someone like Jacob deGrom would technically fall into that group, but it’s definitely a group to tread lightly in. It also depends on what the second pitch is. In Gausman’s case, that second pitch is his splitter. Gausman’s splitter is one of the best offspeed pitches in baseball, registering a .133 BAA, .224 SLG, .175 wOBA, and a 45.9% whiff rate in 2022. However, it’s his lack of a reliable third offering and a mediocre four-seamer that has me avoiding him on draft day, among other reasons.

A whopping 219 of his 227 strikeouts in 2021 came off his four-seamer or splitter, a combination he threw 88.1% of the time, the remaining 11.9% of his pitches were nearly split down the middle between his changeup and slider, both coming in around 6% of the time. That changeup, while recording a solid 39.7% whiff rate, wasn’t an effective pitch for Gausman in 2021, finishing with a .348 BAA, .696 SLG, and a .473 wOBA. His slider was better in those departments but still had minimal impact overall as Gausman only threw it 5.4 times per game on average. If his fastball or splitter aren’t working in any given start, can Gausman rely on either his slider or changeup to pick up the slack?

Another concerning area with Gausman was how he performed over the second half of the season, as outlined below.

While Gausman still had a very good walk rate, strikeout rate, and K-BB rate in the second half his ERA and WHIP ballooned from 1.73 and 0.82 to 4.42 and 1.37 respectively. And overall, his ERA indicators and contact metrics were nearly identical to his 2020 season when he finished with a 3.62 ERA. Nothing in the profile points to why he was so dominant in the first half of the season. I’m also not expecting him to replicate his second-half performance either, but a return to 2020 levels with an ERA around 3.50 and a strikeout rate in the 25-27% range feels about right.

That’s still a sound profile for fantasy, but not for where Gausman is being selected. He’s currently going off the board around pick 69 as the 20th starter off the board. You could easily wait two rounds and take someone like Charlie Morton, Yu Darvish, Luis Castillo, Shane McClanahan, Justin Verlander, Alek Manoah, or Blake Snell who can all get you similar or even better production.

This is one ADP I simply cannot wrap my brain around. In February DCs, Sean Manaea’s ADP is around pick 133 as the 37th starter off the board. Here’s a live look at me trying to comprehend how that makes any sense:

In each of his five seasons (not counting his five-start 2019), Manaea has been between a 3.58 and 4.50 ERA with a strikeout rate between 16.5% and 25.7%. That 25.7% mark was in 2021 with Manaea’s previous career-best being a lackluster 20.9% back in his 2016 rookie campaign. I’m sorry, but nothing in those previous two sentences makes me want to draft Sean Manaea as my SP3 for fantasy. Even having him as my SP4 wouldn’t make me click my heels together and jump for joy.

Did a noticeable and tangible change happen to cause Manaea’s strikeout rate to soar to that career-best mark?

Nope, not really. Sure, Manaea’s whiff and SwStr rates improved but not to levels much higher than he’s reached previously in his career. Additionally, none of his three offerings generate whiffs at a high clip, sitting at 32% (changeup), 28% (slider), and 25% (sinker). Manaea is a sinker-ball pitcher that doesn’t induce a ton of groundballs (42.7% in 2021) and he even allowed the most home runs on sinkers this past season with 19. The second highest was Marco Gonzales at 16.

Even at last season’s levels, Manaea only finished 148th overall on the Razzball player rater.

For a pitcher that has proven to be a 3.75-4.00 ERA arm and that hasn’t proven he can maintain a strikeout rate above 25%, I’m 100% avoiding him at his ADP, especially with the other pitchers going in this range. I’d much rather take one of the two pitchers going in front of him (Zac Gallen and Tyler Mahle) or the two pitchers going directly behind him (Chris Bassitt and Carlos Rodon). In fact, I’d even take it a bit further and select Luis Garcia, Logan Gilbert, Ian Anderson, or Eduardo Rodriguez who are all going a round after Manaea. This ADP is just too damn high. Manaea is a 180 ADP pitcher masquerading as a 130 ADP pitcher.

Over the years, my opinion of Tarik Skubal has been a bit tumultuous. After being a tad pessimistic about him as a prospect, I finally began coming around on Skubal last season. Now, I’m trending back in the opposite direction. In our 2022 SP Preview episode on Fantrax Toolshed, Michael Simione mentioned how bad Skubal’s four-seamer was in 2021. Using the word “bad” is being incredibly generous too. Last season, Skubal’s four-seamer recorded a disastrous .291 BAA, .613 SLG, and .413 wOBA with the expected metrics even a tad worse. On top of that, Skubal allowed 22 homers and a 92.5 mph AVG EV off his four-seamer. Skubal did start throwing the pitch less as the season wore on, finishing at just 34.7% usage in September while increasing his sinker usage, so that’s something to monitor heading into 2022. 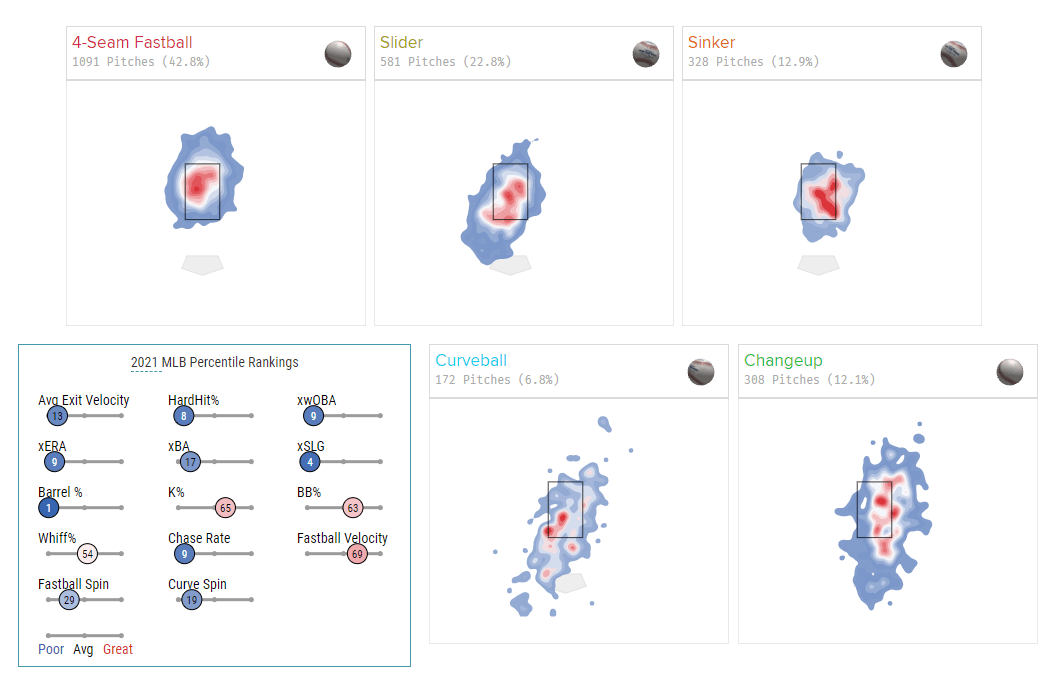 While the four-seamer is definitely a red flag, the quality of contact metrics that Skubal allowed also yield pause when considering whether or not to draft the young southpaw. Skubal ranked in the bottom-13% of qualified pitchers last season in barrel%, AVG EV, xSLG, xwOBA, xwOBACON, and hard-hit rate while also seeing his xERA and FIP finish above five. On the bright side, Skubal has shown the ability to miss bats at a high clip, but even that has been a tad fluky. In 2021, Skubal finished with an above-average 25.9% strikeout rate and 26.7% whiff rate, but his 11.4% SwStr, 30% O-Swing, and 23.9% chase rate all were lower than anticipated. His spotty command has a large impact on these metrics as hitters aren’t willing to chase outside the zone.

I’m still expecting an above-average strikeout rate moving forward but the ratios will likely be middling and not worth the investment on draft day.

Four Others to Avoid at ADP

Jacob deGrom, NYM (23.7): There’s no doubting that deGrom is the best pitcher in the game, but how healthy is his right elbow? Can he pitch 130+ innings in 2022? Those two questions cannot be answered right now and makes him incredibly risky as a top-25 overall pick.

Robbie Ray, SEA (49.6): I’m more of a believer that Ray’s 2021 performance can be replicated or approached than Gausman’s, but the walk rate still gives me pause. The strikeouts will be nice, but all ERA indicators had him around a 3.50 ERA last year and I’m not fully buying that a career 11% walk rate arm can maintain a 6.7% walk rate moving forward. He also allowed the 3rd most home runs in baseball last season. If I can get Ray as my #2 around 25 picks later, I’d be fine with that. That likely not going to happen though.

Tanner Houck, BOS (199.9): The ADP might appear reasonable, and it’s honestly not bad. However, as it stands now, Tanner Houck doesn’t have a rotation spot entering the 2022 season. He’s an electric arm with the upside to be an annual top-100 fantasy selection, but I’m worried that he’s going to be used in a similar role to how he was utilized in 2021. That makes it difficult to take him as a top-200 pick. If we get closer to opening day and it looks like he’ll be in Boston’s rotation, ignore everything I just said. Well, outside of the him being talented part. But for now, he’s behind Sale, Eovaldi, Pivetta, Hill, and Wacha on the depth chart.

Sixto Sánchez, MIA (368.0): Sixto’s ADP is falling by the minute. All the news we’ve heard about his shoulder and recovery hasn’t been positive and who knows when he’ll debut this season and how much he’ll pitch. If you’re in a standard 10 or 12-team redraft league, he’s a clear avoid for now. But if you find yourself in a 50-round DC or Draft & Hold and he’s available at pick 607, feel free to scoop him up then.

Will These Players see BABIP Regression in 2022?