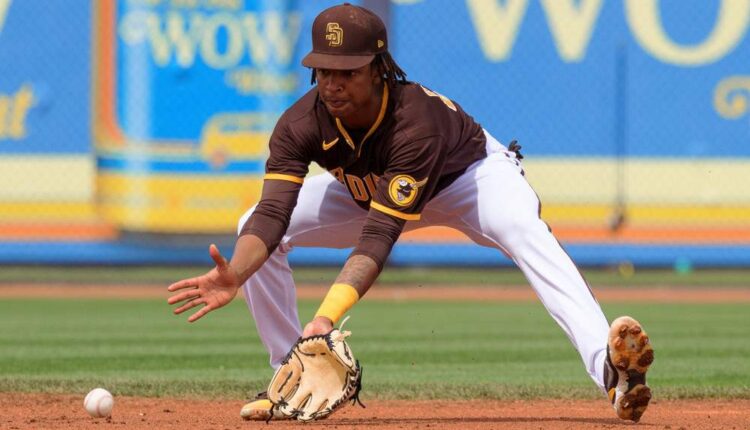 Welcome to our 2022 team top prospect rankings series. Eric Cross and Chris Clegg will go through all 30 Major League organizations, continuing today with their San Diego Padres Top Prospects for dynasty leagues. In each installment of this series, you’ll find the top-20 rankings from both Eric Cross (AVG) and Chris Clegg (OBP) along with one prospect each that they’re targeting heavily in dynasty leagues right now. Hopefully, these rankings will help you in your dynasty leagues, and maybe give you some new trade targets to consider.

James Wood was one of the most intriguing players in the 2021 draft class due to his size, strength, and athleticism. Listed at 6’7/240, Wood looks like he could play power forward in the NBA, but instead, he’s a slugging corner outfielder excelling in the lower levels of the Padres system. Wood has racked up three home runs and four steals in 12 games for Low-A Lake Elsinore with a 333/.491/.619 slash line. But what’s even more impressive is the fact that he’s walked (12) more than he’s struck out (8).

While the elite raw power wasn’t a question when he was drafted, many did question the hit tool and how much AVG he would hit for. Wood is still raw and developing as a hitter, but it’s fair to say that he’s exceeded all expectations with the bat so far as he’s hit .359 through his first 38 professional games with a 16% walk rate and 25.6% strikeout rate that has been trimmed down to 14.5% this season. If Wood can get to a 50-grade hit tool longterm to go with his massive power and sneaky speed, that could allow him to excel as an above-average offensive corner outfielder. He’s pushing top-100 overall status right now and realistically could be top-50 by EOS.

Even though Jackson Merrill was the Padres first round pick in 2021, he did not get much love for FYPDs. There has been minimal hype surrounding Merrill this year despite a very solid start to his pro career.

Merrill is an excellent dynasty target for several reasons. It starts with his contact skills. He displayed excellent contact skills last season and it looks to have improved in 2022. Merrill currently has an 85 percent contact rate in 63 plate appearances which has helped lead to a .393 batting average in the early going. Merrill is striking out just 12.7 percent of the time while supporting a 9.5 percent walk rate.

Merrill also has a projectable frame and the ability to grow into more power. He just turned 19 years old and is currently listed at 6’3/195. There is plenty of power projectabilty and Merrill could grow into average game power with time. There is a chance Merrill is available on your dynasty waiver wire, but if not he could be a cheap trade target that could pay off down the road.