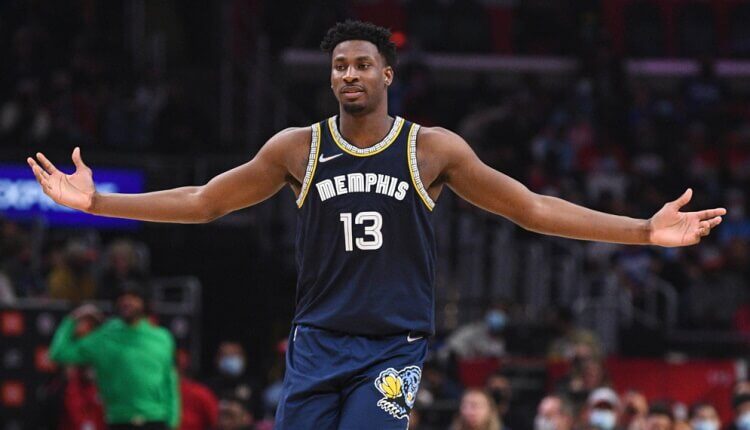 Jaren Jackson Jr. had foot surgery and is likely going to miss significant time this season. Jaren split his minutes at the power forward and center positions last season. With Kyle Anderson also gone the Grizzlies will start the season with a surplus of PF minutes to fill as well as some C minutes. Replacing Triple-J will take more than one player.

Steven Adams is exclusively going to play at center. He’ll likely start for the Grizzlies again and may pick up a few additional minutes but not enough to make him a fantasy asset in most formats.
Best Fantasy Rank: 66* (2017-18)
Last Season Rank: 180*

Brandon Clarke is interesting. As a rookie, he was the 80th ranked player in 9-cat (including TOs). Each year since his value has decreased. And this last season he was in and out of the rotation playing under 20MPG. Clarke is going to gain minutes because he can play both power forward and center. How many minutes you ask? While Jaren is out I’d expect Clarke to play at least 25MPG which would make him fantasy relevant in 9-cat roto leagues. And if he’s playing well that could climb close to 30 minutes which would make him a must-roster player in that format. Brandon Clarke isn’t the perfect replacement for Triple-J but he may be the biggest beneficiary for fantasy purposes.
Best Fantasy Rank: 80* (2019-20)
Last Season Rank: 133*

Xavier Tillman looked promising as a rookie despite not having much fantasy impact. Last season his minutes got cut which isn’t a good sign. Tillman could pick up significant minutes and still not be impactful for fantasy purposes.
Best Fantasy Rank: 220* (2020-21)
Last Season Rank: 345*

The Grizzlies’ most likely scenario to cover power forward minutes is by going small. Enter Dillon Brooks and Ziaire Williams. Are either of these guys going to replace triple-J’s stats? There’s no one-for-one replacement on the roster because Jaren is a rare talent. However, Dillon Brooks is an established commodity and Ziaire Williams showed some flashes as a rookie last season.

Dillon Brooks was looking fantasy relevant for the first time in his career when he was on the court last season. The problem was he missed the majority of the season due to injuries. Offensively Dillon isn’t more than a streaky shooter, but that isn’t why he gets minutes. It’s his defense that earns him trust, but that impact doesn’t really translate well for fantasy purposes. His improvements fantasy-wise came from field goal percentage, free throws, assists, and points. It’s possible for Brooks to be a top 100 guy. He has to improve his shot selection. Attacking and drawing more fouls will reap benefits by boosting the weight of his good free-throw shooting. And the major jump for fantasy could be assists. Dillon Brooks isn’t going to replace triple-J, but if the Grizzlies go small it could inflate Dillon’s counting stats
Best Fantasy Rank: 122* (2021-22)
Last Season Rank: 122*

Ziaire Williams is 6’8″ so if the Grizzlies want to play without a power forward at times Ziaire might just be the beneficiary. Now I must warn you his rookie stats weren’t exactly fantasy-friendly. Young players often make massive strides that weren’t predictable. Ziaire did improve his shooting in the second half of the season last year. When you go from a below-average three-point shooter to a pretty good one that’s going to earn you minutes. And if Ziaire continues to shoot mid-to-high 30s from three like he did post-all-star he’s going to earn minutes. Like I mentioned his game wasn’t ideal for fantasy, but if he becomes a better passer and rebounder he might just be fantasy relevant this season. Now I’m not suggesting you draft him in standard leagues, but he should be on your watch list. For you deep-leaguers out there feel free to take a flyer on him.
Last Season Rank: 311*

There won’t be just one player that steps in and replaces Jaren Jackson, but there are many guys on the Grizzlies that become interesting while Jaren Jackson Jr. is out.

Welcome Jordan to the Fantrax team in the comments below and then check out the rest of our top-notch fantasy basketball analysis!