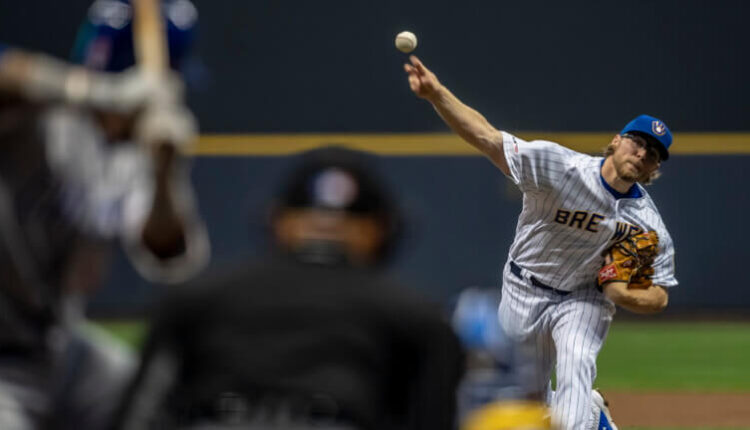 So what makes a pitcher good and valuable in fantasy? Wins? Quality Starts? What stat is best for evaluating starting pitchers? Or is it neither of those… something different?

With baseball nearing the finish line, are you ready to jump into fantasy hoops? From joining a public league with our Fantasy Basketball Commissioner to trying one of our Classic Draft Contests, there are plenty of ways to play Fantasy Basketball on Fantrax!

Time to Ditch the Win?

For the longest time – and even still – wins have been the gold standard. However, as the fantasy community, following the SABR community, (though maybe not some of the “old guard” leagues and sites) has recognized the flaw in wins, there have been some wonderings about other stats that we might use in our leagues to better capture pitcher value.

There are plenty of flaws with Wins. Obviously one of them is that they are team dependent – a pitcher failing to get a win or getting a win tells you almost nothing about how a pitcher did in that isolated game. If they are a starter you know they went at least five innings. If they are not a starter it means nothing – relievers, especially closers, seem to get most, though not all, of their wins because they failed to get a save or hold. Otherwise, they happened to enter in a tied game. For starters, the five innings pitched is the only aspect we know for sure from the game. However, with the increase in openers and bulk guys, etc… this has continued to decline in usefulness.

In addition to that – wins are more spread across the board too. Do the best pitchers generally still get the most wins? Sure. But this season the most wins in the league was 20 – and not by anyone who people expect to win a CY Young – but by Julio Urias. This is nothing against Urias, he’s a very good pitcher. But not going to win the CY Young, and not in that top tier.

Next on that list – Adam Wainwright. Ok then… While we do see Gerrit Cole, Max Scherzer, Walker Buehler, and others at the top – you have to go down to 11 to see Corbin Burnes – who is also the league leader in pitcher WAR according to Fangraphs (closely followed by Zack Wheeler, with 14 wins). Well ok then Nathan, you might say, why don’t you just use WAR to determine it… to which I say ok, if you want to, you can do that.

So – if wins are limited – and not even restricted to starters even though they are there to look at the quality of the starter – what about the most commonly used alternative quality starts?

Now quality start (QS) is, in and of itself, a rather flawed stat. A QS is defined as when a pitcher goes 6+ innings with 3 or fewer earned run scored. But if a pitcher has a complete game and gives up 4? Not a quality start. If a pitcher goes 5.2 and gives up no runs – not a quality start.  The failure to really adjust makes this a limited stat. It does generally mean that that pitcher has kept their team in the game – but here we run into some more problems with the increasing adjustment in how deep pitchers go.

Does this of course, like wins, also reflect the best pitchers generally? Sure.

So even though Corbin Burnes leads pitcher fWAR (which, remember, WAR is a counting stat so requires bulk), he is not near the top of either of these pitching stats. Neither of these stats is perfect – and as I think we will sadly see – a perfect one doesn’t necessarily exist. But before we do that – let’s take a moment to discuss the other normal pitcher scoring stats.

The Other Pitching Categories

The other stats, ERA, WHIP, and K (we’ll talk about saves next week) are all pretty solid. If you really want to get into the more SABR side of fantasy stats you could use stats like xERA, FIP, XBAagainst, or other metrics like that. But, as a rule, ERA, WHIP, and K correlate to good pitchers. For reference, the K leaders this year were Ray, Wheeler, Cole, Scherzer, Burnes, Gausman. The best ERAs among qualified starters were Burnes, Scherzer, Buehler, Woodruff, Wheeler, Gausman, Ray. WHIP? Scherzer, Burnes, Woodruff, Buehler, Wheeler, Urias, Gausman… Sensing a trend?

So, in general – those three categories seem to be pretty indicative of who the good pitchers are.

But if those do a good job, what do we do about this W/QS conundrum? I think one under-utilized stat in this is innings pitched. While it may seem like an odd stat that is mainly used as a maximum to restrict bulk starters or a minimum to make sure teams have enough pitchers pitching. However, it can also just be used as its own category. You want to win IP? Your pitchers have to log a lot of innings but you better hope they all pitch well or your ratios will be a mess. You’ll probably rack up Ks, but could be punting the rate stats (of course, depending on league style/format/scoring that may be a viable strategy).

But before we leave it at IP, let’s also look at some fun alternatives that you can do if you’re playing on Fantrax. You can find a complete glossary of our scoring categories in your league under other – all options – scoring glossary in your leagues.

These are obviously a little more involved – but do offer another way to pretty much redefine the QS stat to maybe more accurately reflect what you would like to see. Or you can use QS2 or QS3, which are if a pitcher has to at least 5 with 3 or fewer earned runs or 5ip with 2 or fewer ER.

Another option might be QSW, which is Quality Starts+ Starter Wins, and so counts QS but also removes reliever wins.

Take a lok at the glossary and explore some other options there!

We’ll be back next week to consider or reconsider that traditional fifth pitching stat – saves, and how to reconsider relievers.