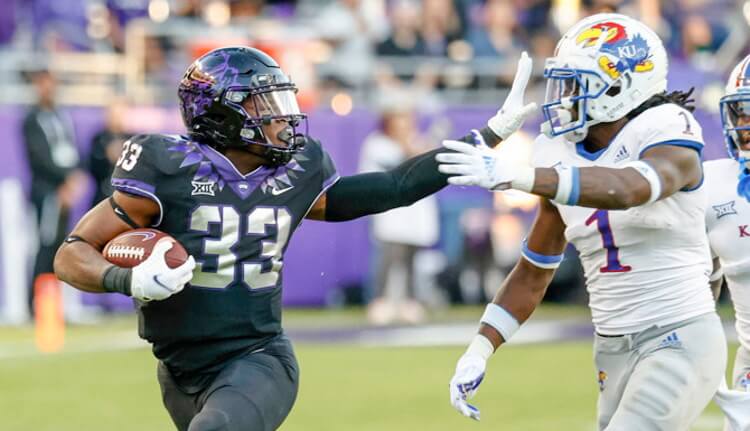 What is a sleeper? To me, a sleeper is someone who is forecasted lower in the position rankings but can provide tremendous value relative to ADP. It is time to uncover some running back sleepers for you to keep an eye on come draft day. Uncovering these hidden gems might be the difference in making the playoffs in your league. Each position has a handful of candidates that can be game changers for your team amid breakout seasons. In this series, I will be taking an in-depth look at two potential sleepers per position.

Let’s uncover two potential running back sleepers that you should keep an eye on. One is looking to pull off a comeback player of the year caliber season and the other is ready to showcase his skills as a first, full-time starter in the weak defensive league of the Big 12.

Running Back Sleepers for 2022

(missed last season due to injury)

After posting 163 yards and two touchdowns in 3.5 quarters vs Ohio State of all teams, Ibrahim suffered a season-ending leg injury dampening what seemed to be another solid season from the Gophers’ runner. In a COVID-shortened season in 2020, Ibrahim managed 1,076 yards and 15 scores in just seven games. If you prorate those numbers for a full season Ibrahim would have projected to finish with 1,845 yards and 26 touchdowns. Minnesota fans hope to see Ibrahim return to his 2020 form and take over as one of the nation’s top running backs.

Though the O-line is losing two key guys to the NFL, the Gophers have added two solid transfer linemen from Notre Dame and Michigan. Ibrahim is the clear RB No. 1 in Minnesota and will look to post another 1,000-plus yard season. The Minnesota offense should finally incorporate a passing game which can open up the ground game even more for Ibrahim, enhancing his chances for production. Minnesota as a whole is a sleeper to win the Big 10 West as Ibrahim has the value of being the best running back in the Big 10.

Their schedule only brings three defenses that rank in ESPN’s Top 25 Future Defensive rankings: Wisconsin (5), Iowa (7), and Penn St. (17). Expect the Gophers to flirt with eight or nine wins and compete in all 12 games, leaving Ibrahim plenty of opportunity to make a mark on your fantasy team. I expect him to get the vast majority of the carries and think he will eclipse 1,200 yards on the ground this season while adding 12 touchdowns. Mo Ibrahim is a big-time sleeper.

Mohammed Ibrahim being labeled a sleeper is an ultimate disrespect to such a dominant back, but thanks to his 22nd position rank, he provides the best value in the entire player pool. Projecting as an RB No. 2 in the rankings, Mo is going to finish as a Top 10 ball carrier this season. Big-time sleeper, tremendous value, keep all eyes on Ibrahim on draft day.

Kendre Miller was overshadowed by future NFL prospect Zach Evans for some of the season, but eventually, he broke out and ended up having only nine attempts and 25 yards less than Evans, leading Evans to transfer to Mississippi. Miller saw the fourth highest rushing volume on this Horned Frogs team behind Evans, QB Max Duggan, and RB No. 3 Emari Demercado.

Despite ranking fourth in carries, he ranked second in yards, first in yards per carry, and first in touchdowns. He posted three 100-plus yard performances including a 185-yard, three-touchdown performance vs Texas Tech. Miller can be classified as a sleeper on his own team last year, and now finds himself as RB No. 1 and a potential big-time running back sleeper on draft day.

Miller walked away from spring as the clear RB No. 1 for this TCU team. In a new offensive system under new coach Sonny Dykes, I expect to see fewer rush attempts from the quarterback position and leave the majority of rushing to the running back room. Miller will get the majority of the looks as he is the most dynamic back on this team. His role will be enhanced thanks to his involvement in the passing game making him a big get on draft day.

TCU will see four teams ranked in ESPN’s Top 25 Future Defensive rankings: Baylor (13), Oklahoma St. (15), Iowa St. (22), and Oklahoma (24). The Horned Frogs averaged 26 points per game in 2021, but under Dykes, I expect them to be a lot more efficient on offense, adding to Miller’s value. The dynamic ball carrier is one of the most dynamic backs in the Big 12, and he is a big sleeper to keep an eye on.

Miller projects as an RB No. 3 this season, but he will find his way in someones starting lineup, hopefully yours. Miller has a Top 15 ceiling so expect him to be a solid RB No. 2 by year’s end. He will be a solid backup option and save you in case of any injury or you could make him the centerpiece of a big trade. Don’t forget about this sleeper, the value is there.

Ibrahim is a league winner while Miller can provide much-needed depth in the later rounds, being as overlooked as he is. A few others who could be considered sleepers are, Travis Dye (29th), Devin Neal (39th), and Gavin Williams (55th). RB’s to avoid include, Chris Rodriguez (unless he will be cleared, 41st) and Chase Brown (19th).

If you enjoyed Ryan’s Running Back Sleepers, make sure to check out his 2022 Quarterback Sleepers!