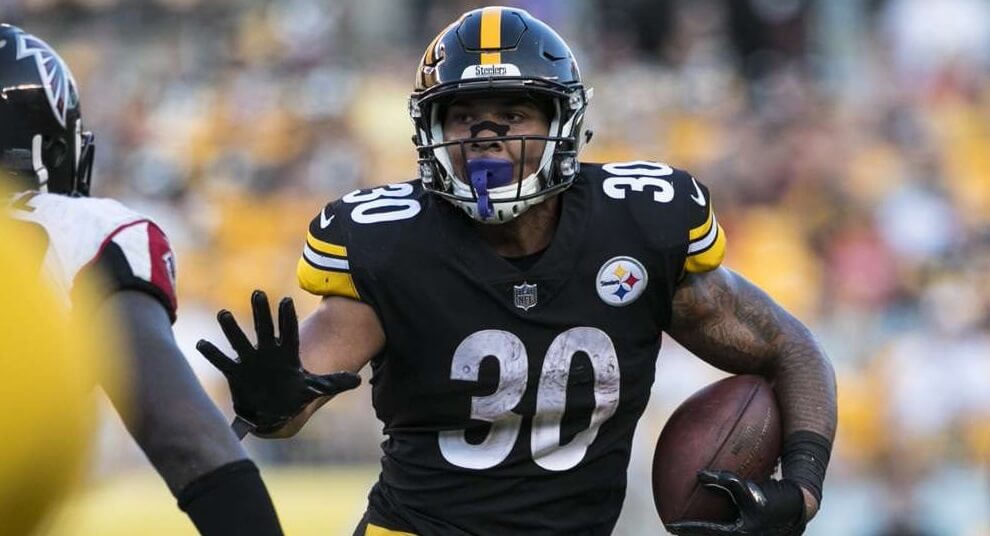 What is apparent in early Fantasy Football drafts is that the very elite RB types fly off the draft board quickly. If you draw one of the first four spots in your draft, you will be sitting in a pretty spot to grab one of the pure elite. You can still get a very good RB1 type at any point later in the first round, but if you wait much longer past that point, you will have to settle for a first starter who may not be ideal.

The clear Top Four this season in FanTrax PPR drafts this year are Saquon Barkley, Christian McCaffrey, Ezekiel Elliott, and Alvin Kamara. If you are fortunate to land in one of the Top 4 spots in a snake draft you will land one of the prime superstars. You may see these top-tier RBs go in varying orders in different drafts. I personally prefer McCaffrey first, as Elliott can do seemingly something concerning off the field at any time, Barkley will face extra defensive attention this season without Odell Beckham Jr., and Kamara is the only one of the four who shares some time with another RB. He also may not quite match the others in terms of combined yardage. But any of these four can be taken No. 1 overall and no one would call it crazy.

After that, there is a second tier that includes Melvin Gordon, David Johnson, Le’Veon Bell, and James Conner. While that is their FanTrax ADP order, I rank Conner first because of the impressive numbers he put up over less than a full season in 2018 and the very significant role he could play in the Pittsburgh offense this year as the clear top star other than JuJu Smith-Schuster. Bell should be refreshed and poised to re-establish himself after a year off. David Johnson could be reinvigorated for a big run with a new QB and supposed offensive guru as a coach. I think Gordon’s FanTrax ADP of 5.95 is a bit too high when you consider he has suffered notable injuries in three of four pro seasons.

Joe Mixon is the 10th RB off the board in FanTrax PPR drafts and anyone who gets him late in the first round can be content with him as an RB1. But Todd Gurley is being picked eighth on average, just ahead of Mixon and Conner. The telltale signs of a reduced workload for Gurley are all there, and there is really no reason to take him over the likes of Conner and Mixon at this time. Both of those guys are healthy and set to take a heavy majority of their team’s RB touches.

Yes, we have seen stories about Jaylen Samuels and Giovani Bernard seeing increased work this year, but I put much less stock into those summer rumors than the fact that Gurley’s knee is in a condition to cause him to lose a good amount of touches. Always take the healthy player when players are ranked closely together.

Back of the RB1 Pack

After the top nine or so, you are looking at RB1 types who have some glaring question marks. Nick Chubb proved he could play at an RB1 level during the second half of the season and he is the 11th RB off the board. But Kareem Hunt lurks during the second half of the season and could start to see more action late in the season at Chubb’s expense. Having two high-level runners available could set up the Browns very nicely for a projected playoff run. Still, Hunt is no guarantee to be in proper game condition or looking like his old self after missing half a season, so I will take Chubb over Gurley, too.

Dalvin Cook, Damien Williams, and Leonard Fournette are the 12th to 14th RBs being taken, and all three are maybe the final possible types who can be projected to play at RB1 levels if everything goes right. But Cook and Fournette have become labeled as injury-prone and Williams has never shown he can play at a high level over a full pro season. Of these three, I will take my chances with Williams at an ADP of 30.9. He should continue to be an all-around threat and TD finisher for a potent offense this year. If all three do reach their potential this season, though, I think the explosive and dynamic Cook will put up the best all-around numbers.

Aaron Jones is the 15th RB off the board and truly represents the beginning of the RB2 pack, which also includes Devonta Freeman, Derrick Henry, Kerryon Johnson, Marlon Mack, Sony Michel, and Josh Jacobs. If the Packers do focus more on the running game under a new coaching regime, Jones could be well worth the selection there. I personally like Mack best in this group, as he can be the finisher for a very good offense and benefit from complementing a very deep passing group. Johnson could build on momentum from last season before he was injured and Jacobs may end up being the very best of this bunch overall. He is a superb all-around talent and will be an important piece in an improving offense. Freeman and Michel have their health concerns and Henry has never sustained a high level of play over an extensive period.

Phillip Lindsay, Tarik Cohen, and Mark Ingram are the 21st through 24th RBs taken, representing the official end of the RB2 group if you attach it to ADPs at the position. Lindsay may still have to fight off Royce Freeman, but if he does, he could be a real nice value at 49.2 overall. Cohen finished in RB1 territory last year but was inconsistent and there are now more RBs in the Chicago picture to possibly reduce his rushing touches. Ingram could be very underrated at 52.3 as he gets his first chance to be a clear starter.

By the mid-20s at RB, you are taking more apparent risks in terms of who you employ as your second running back. Kenyan Drake has upside but plays on a very bad team and has never displayed any sort of consistency before. James White could be the second-best receiver on New England this year, so he is worth taking at 54.5 even though his carries will continue to be sporadic. Chris Carson is coming off a career year, but may have to share touches with Rashaad Penny. He also has a tendency to get banged up.

By the time you get to No. 28 off the board, you are in territory where you are looking for promise more than proven production in the forms of Derrius Guice, David Montgomery, Penny at 32nd off the board, and Miles Sanders at 33rd. The backups and handcuffs start at 35 according to ADPs, where Darrell Henderson is at 93.3. LeSean McCoy has tumbled all the way to 100.9.

After reviewing these trends, it is apparent you should not wait until later than the 15th RB off the board to get your first starter, or 27th for the second starter. Both of those are both ultimate, wait until the end of the run scenarios. To feel truly comfortable, you should try to get a Top 9 guy at the position for your RB1 spot, and a Top 20 or so player as the RB2. Otherwise, you will just have to make sure your homework is done and you can hit on certain targets that seem destined to outperform their ADPs.

Are you onboard with Scott’s RB Report? For more great rankings, sleepers, and analysis check out the 2019 Fantrax Fantasy Football Draft Kit.