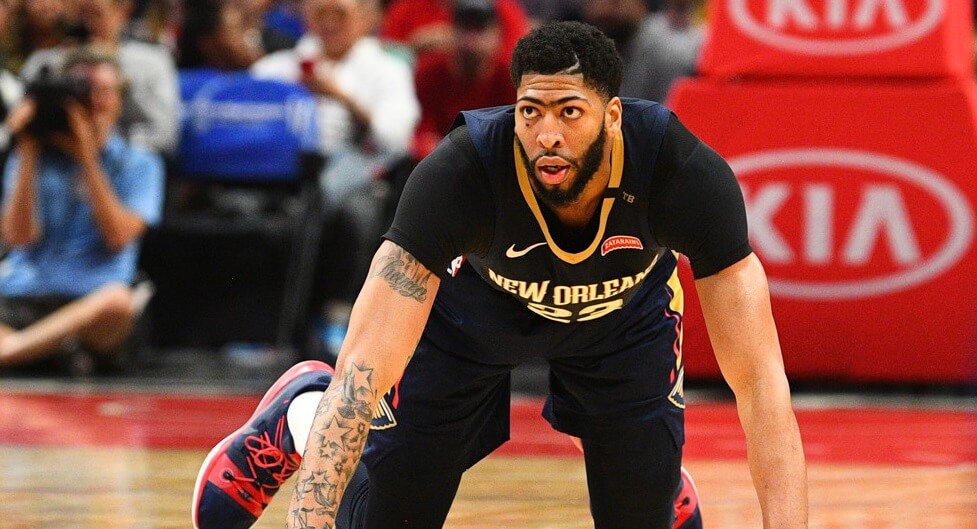 Not two days following the Raptors’ coronation as NBA Champions, the Lakers and Pelicans decided to take the spotlight from north of the border. On Saturday afternoon, the Pelicans traded Anthony Davis to the Lakers for a bevy of young assets.

The Pelicans have agreed to a deal to trade Anthony Davis to the Lakers for Lonzo Ball, Brandon Ingram, Josh Hart, and three first-round picks – including the No. 4 overall in 2019 Draft, league sources tell ESPN.

There are many moving parts to this deal, and New Orleans is likely not done on the trade front with the NBA Draft looming. Here’s my quick reaction on what this deal means for the upcoming NBA season and the implications it has for fantasy basketball.

The Lakers are going all in with a LeBron James, Anthony Davis duo. Gone are the former #2 picks in Lonzo Ball, Brandon Ingram and yes even D’Angelo Russell. Los Angeles gave up a lot in this trade, slashing their young core and mortgaging their future. In return, they pair LeBron with a bonafide star in James’ final prime years, however many he has left.

Los Angeles still has at least $29 million in cap space (that number can potentially grow to just under $35 million) to fill at least 11 roster spots. Reports have been flying around linking the Lakers to Kemba Walker and LeBron’s former teammate, Kyrie Irving. However, if LA decides to spend their remaining cap space on a third star, the rest of the roster will look very slim.

The other route would be to fill out the roster with multiple contributors. This is the path recent champions like the Raptors and Warriors took. Yes, Golden State had their four stars. But they also saw the value that guys like Andre Iguodala and Shaun Livingston brought to the table. I would expect LA to take the latter approach and try to recuperate some of the depth they lost in the trade.

Anthony Davis has already declared that he plans to enter free agency next offseason. Even though the plan is to re-sign with LA if the Lakers somehow don’t make the playoffs or something goes completely wrong, Davis has a chance to jump ship next summer. The Lakers gave up way to much of their future in this deal. They have to make sure the team can compete next season.

Onto the Pelicans’ side of the deal. This was a massive haul for David Griffin, the new VP in New Orleans. For a team that had “no leverage”, getting this kind of a haul is incredible. The last two trades that were similar in stature in terms of assets were the Celtics-Nets trade that inspired the Stepien Rule. The other was the Nuggets’ haul for Carmelo Anthony orchestrated by none other than Raptors POBO Masai Ujiri. Those deals worked out wonders for the teams trading the superstars and Boston is still reaping the benefits to this day.

New Orleans isn’t done dealing. Previous reports of Lonzo Ball not wanting to play in New Orleans might make the team relocate him elsewhere. The Pelicans are also reportedly shopping the 4th pick on Thursday’s draft, and there are a lot of suitors. Finally, with Anthony Davis gone, Jrue Holiday could be the next veteran to find a new home as he doesn’t fit this new core’s timeline. But for now, the Pelicans look like a darkhorse in the West. Lonzo throwing lobs to Zion looks like so much fun. Ingram now has the freedom he never had playing next to LeBron. This team is going to be fun to watch.

The cherry on the top for the Pelicans: they control a three of the Lakers’ next seven drafts. The final pick they receive from this deal will come in AFTER Davis’ next contract. That, to me, is an incredible return and a better asset than Kyle Kuzma as an add on to this trade.

It’s hard to determine any fantasy basketball impact this early in the offseason. The Lakers currently have four players under contract for next season, while the Pelicans are still wheeling and dealing.

However, it’s quite clear that Anthony Davis will once again be a hot commodity at the top of fantasy basketball drafts. Davis was still a top 20 fantasy basketball asset with only 56 games under his belt. LeBron played just 55 games and was just short of returning top 25 value. These two complement each other perfectly on the court, and I expect them both to be locked in first round picks come draft time.

Anthony Davis should be a top 3 pick, while James should safely be a top 10 selection. I don’t expect either of their productions to take a hit. LeBron should still be a 27-8-8 guy with high-efficiency next season. AD will be the defensive cog in this duo, and his stats shouldn’t take a hit. If anything, both players will benefit from each other with so much attention needed to guard either one of these guys every night.

As a duo, both Davis and LeBron should maintain their production if not improve on their numbers from last season. The only worry is if the Lakers sign a third star in Walker or Irving. Adding one more star would likely call for one of them to sacrifice some production. For now, both AD and LeBron look like top tier fantasy basketball assets.

If the Pelicans end up retaining the three young players they just acquired, they’ll all have a chance to improve on what was a disappointing 2018-19 fantasy basketball season.

Lonzo Ball played just 47 games and understandably regressed. It’s hard to improve when you get fewer minutes as a result of injuries. Lonzo wasn’t relied on as much to distribute and create playing next to LeBron. Their skills overlapped. In New Orleans, Lonzo will be the primary ball carrier and set up man for their young core. Should he stay healthy, an obstacle at this point in his career, Lonzo should flirt with 8-10 assists per 36 next season. Ball is poised for a bump in production. But it’s worth noting that he only suited up for 99 of a possible 164 games in his NBA career so far.

Ingram has a much harder path to the hardwood ahead of him. His recent blood clot diagnosis is not something to brush aside. In New Orleans, Ingram has the freedom he never had playing next to LeBron. He has a good chance to finally crack the 20-point mark on good efficiency. He shot just short of 50% from the floor last year, and the looks will keep being open with defenses focussing on Zion. The Pelicans are shaping up to be a fast run and gun team with the personnel they have. Ingram will only benefit from that style of play. Next season could very well be Ingram’s breakout year.

Remember how hyped Josh Hart was when he won Summer League MVP in 2018? After a season of mostly riding the bench, it seems everyone forgot how skilled the third-year man is. Hart is a good rebounder at the guard spot and provides defensive upside to go with his sharpshooting abilities. Hart instantly becomes the Pelicans’ best shooter not named E’Twaun Moore. I expect him to average above 2 threes and provide a steal per game in a Pelicans uniform. The prospect of Jrue Holiday moving would also be a huge boost to the Villanova product.

Some more names to keep an eye on for the Pelicans include Jrue Holiday. He’ll likely be shopped. If not, he can definitely play alongside Lonzo as the two guard and form a defensive tandem like no other. Julius Randle is likely opting out of his $9 million player option looking for a raise after his play last year. Do they re-sign him? Or do Cheick Diallo or Jahlil Okafor get called up to start?

There are still lots of moving pieces to see shape up this offseason. But there’s no question that this mammoth trade that took place today was the biggest, and most important, domino to fall ahead of the 2019 NBA offseason.

With the NBA Draft just days away keep an eye on our Fantasy Basketball page for an early look at the fantasy impact of what looks like a historic day in the NBA.