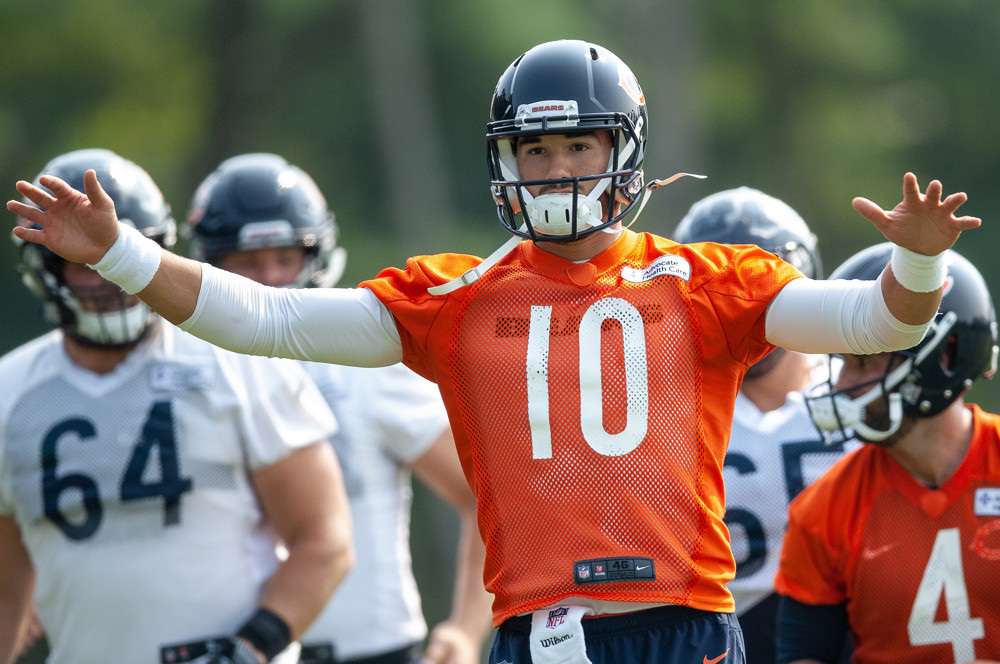 Everyone loves when a player they draft breaks out and suddenly is much more valuable. In fact, you need some picks like that in order to win a championship. On the other hand, no one enjoys drafting a player with an early pick and that player failing to live up to expectations. Not only that, in most cases a bust not only costs you an early draft pick, but they cost you by repeatedly putting up dud performances while in your lineup. By the time you sit them it may be too late. In order to do that you need to know which players will be breakouts and which will be busts. This is a series I will be doing over at Fantrax, identifying breakouts and busts at each position. Today we’ll dig into the quarterback breakouts of 2018.

Mitch Trubisky: I am far from the only one to say it, but I think the Bears will be this year’s Rams team. Now, by me saying that, I do not think they will win their division and become a powerhouse. But I do think they have a second-year QB that will no longer be working with a football dinosaur, but instead with a young innovative Head Coach in Matt Nagy. Additionally, he brought in former Oregon head coach Mark Helfrich to be the offensive coordinator. Together the two will combine a successful NFL system (Nagy comes from the Andy Reid coaching tree) and a college style offense that Trubisky has previously succeeded in. The first change in the offense I expect is to run more plays from the shotgun. At UNC Trubisky ran an offense that primarily used the shotgun. Meanwhile, John Fox thought it was smart to run just 40.98 percent of the Bears offensive plays and just 30 percent of passing plays from the shotgun, both of which ranked 22nd in the NFL. A change like that would be significant, as it would make Trubisky more comfortable.

Additionally, just like the Rams before last season, the Bears went out and surrounded their young QB with offensive weapons. Look at the upgrades to the Bears weapons. Josh Bellamy/Dontrelle Inman is now Allen Robinson. Kendall Wright is now Anthony Miller (expect to read about him in the WR article) and Zach Miller. Dion Simms is now Trey Burton and Adam Shaheen. You notice I have written a lot of why I like Trubisky without even bringing him up. The Bears have done a great job of putting him in a position to succeed, and given the fact that he was a very high draft pick and has flashed his talented arm in the past, I am a believer and he is one of my favorite quarterback breakouts this year.

Matt Ryan: It is a little crazy to put Matt Ryan on a list of quarterback breakouts, as he is one season removed from being the top fantasy QB and NFL MVP. However, he is being drafted as a QB2. Much like Julio Jones, much of Ryan’s value was hurt by poor efficiency in the red zone. If we are expecting positive regression there for Julio, why are we not doing the same for Ryan? First off, in 2016 he had 96 attempts inside the 20 and 51 inside the 10. Last year he threw just 75 attempts inside the 20 and 35 inside the 10. Right there we see the volume, but we saw that across the board, as teams are running more when they get near the goal line. That wasn’t the only issue, as previously stated, the efficiency inside the red zone decreased. Last year his completion percentage dropped inside the 20 from 61.76 in 2016 to 46.15, and from 57.41 to 50.

Now, Ryan will never replicate that MVP season. But funny enough, he does remind me of himself coming into 2016. In 2015 he finished fifth in passing yards, but only had 21 touchdowns. Last season, while his yards were down, he finished fifth among all QBs. If he has positive TD regression, as his 3.8 TD percent was around the same as it was in 2015 (3.4 percent) both significantly lower than his career norm of 4.6 percent. He can realistically throw 25-29 touchdowns this season and will outlive his ADP.

Marcus Mariota: Mariota was on a lot of quarterback breakouts lists last season, but fell flat on his face. Now, those who drafted him have a sour taste in their mouth and he is falling down the draft boards because of it. Currently he is the 19th QB off the board according to FantasyPros ADP. The Titans have previously employed an “exotic smash mouth” offense, meaning that they ran often. That is evident in looking at Mariota’s stats, as his career-high in pass attempts is 453 and in passing yards is 3,426. However, with a new coach and offensive coordinator in place, things will look different. Offensive coordinator Matt LaFleur didn’t call plays with the Rams last season, but if he learned anything from Sean McVay we should expect new highs in those stats for Mariota. Additionally, he adds value with his legs as he has rushed for over 300 yards in two seasons and added five rushing touchdowns. That ability gives him a safe floor. If you are looking for a QB to outlive his ADP, Mariota is a very safe bet.

Dak Prescott: While I have never been much of a Dak guy for football purposes, I do believe he is a better Fantasy QB than real life. It is easy to forget, but Dak finished as the sixth best Fantasy QB in 2016. He was also the QB4 through the first nine weeks last season. From that point forward his production came crashing down as Ezekiel Elliott was suspended. But the good news is, Zeke will be back this season. Yes, the Cowboys have bad weapons. But the names of Jason Witten and Dez Bryant were bigger losses than their actual production was. Witten was great, but in recent years he was more of a possession receiver who would often disappear. Dez Bryant was once a superstar, but he now struggles to create space and caught just 52 percent of balls thrown his way the past two seasons. Dak can perform like he did for a season and a half and easily outpace his ADP as the 17th QB off the board according to FantasyPros.

Not as deep but… Andrew Luck: Let me start off by saying this- I am going into drafts and actively targeting Andrew Luck. In the non-PPR FLEX Draft I took Andrew Luck on the 7/8 swing as the sixth QB off the board. This is a draft where I knew everyone would wait and wait they did, as names like Matt Stafford, Jimmy Garoppolo and Pat Mahomes did not go off the board until the 15th round. Now, you might be thinking I am crazy. But I was thinking, I got him for a steal as he is my fifth ranked QB! The reason being, whenever Luck is healthy, he is a top QB. In 2016 Luck played 15 games and was the fourth best QB in Fantasy. In 2014, he was the best QB in all of Fantasy. Not only are all reports that Luck is healthy, but we have visual proof as we have seen him play well in the preseason. I’ve said it for a while, but Luck will be the highest ADP riser, and it is already happening. Him and T.Y. Hilton are championship winners at their current price.

Browns QB: Notice I did not specify anyone by name but rather just the teams QB. That is because I believe both Tyrod Taylor and Baker Mayfield could be one of the top quarterback breakouts of this season. Like Trubisky, it has a lot to do with the surrounding weapons. The Browns are loaded at the skill positions and that much talent should lead to good numbers for either. The duo can also both score points with their legs. Taylor will not hurt you and turn the ball over, while Bakermania has balled out in the preseason so far.

Caveat: If something goes terrible wrong and Drew Stanton is starting for the Browns disregard everything you just read.

Sam Darnold: It is easy to forget, but Josh McCown was a viable Fantasy asset at one point last season. The Jets have solid weapons around Darnold and will likely turn from the long-in-the-tooth McCown and hand the keys to the future franchise QB. Darnold has played well in preseason and can easily out-produce his QB3 ADP.

Lamar Jackson: It is a popular take but watching Jackson play reminds me of Mike Vick. He can do things with his legs that not many QBs in the NFL can match. He does have a lot of work to do as a passer, but the upside with the legs is sky high. If the Ravens struggle this season he could be given a shot to start.