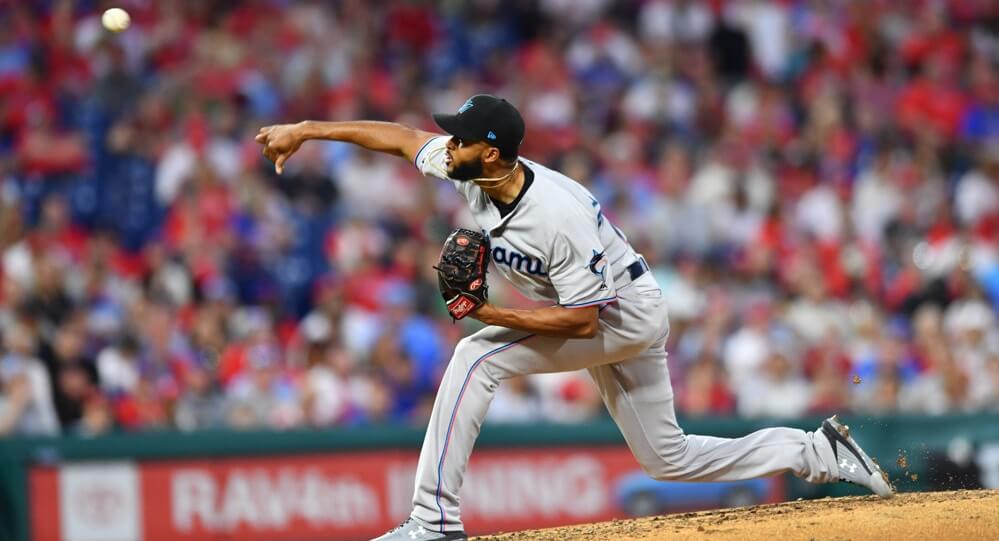 Have you recently started a new Fantasy Baseball league? Ever spent time debating what stats to include? Argued with your league about whether to include wins or quality starts? We have likely all been there.

What is a Quality Start?

The term originated from John Lowe, a Philadelphia sportswriter, in 1985. Lowe created this term as a gauge to see how well a pitcher did his job. He even took it a step further and called a quality start in which the pitcher got a loss “tough losses.” On the flip side, he called a win where the pitcher did not record a quality start a “cheap win.”

Now that you have your history lesson on quality starts let’s take it a step further.

The Rapid Decline in Innings Pitched

As I previously mentioned, quality start leagues in Fantasy Baseball have become increasingly popular over the years. The same has happened with the OBP format for hitters. As a statistic, Wins have plenty of randomnesses, and a quality start means the pitcher earned something, unlike a win. The issue with quality starts is how scarce they are actually becoming. A pitcher capable of posting quality starts consistently is that much more valuable in a league that uses that statistic. But how many pitchers are actually capable of getting quality starts? Let’s look at league-wide data over the last six seasons.

It should not surprise anyone to see the massive drop-offs in innings-per-start and pitches-per-start in 2020. With the weird COVID season and the short ramp-up time, it was the expectation for pitchers to throw fewer innings. They did exactly that. But that is not fully the issue. There has been a steady decline in innings pitched per start in each of the previous five seasons. In each of those seasons in the chart you see above, there was between a 2.4 and 3.4 percent decline each season. 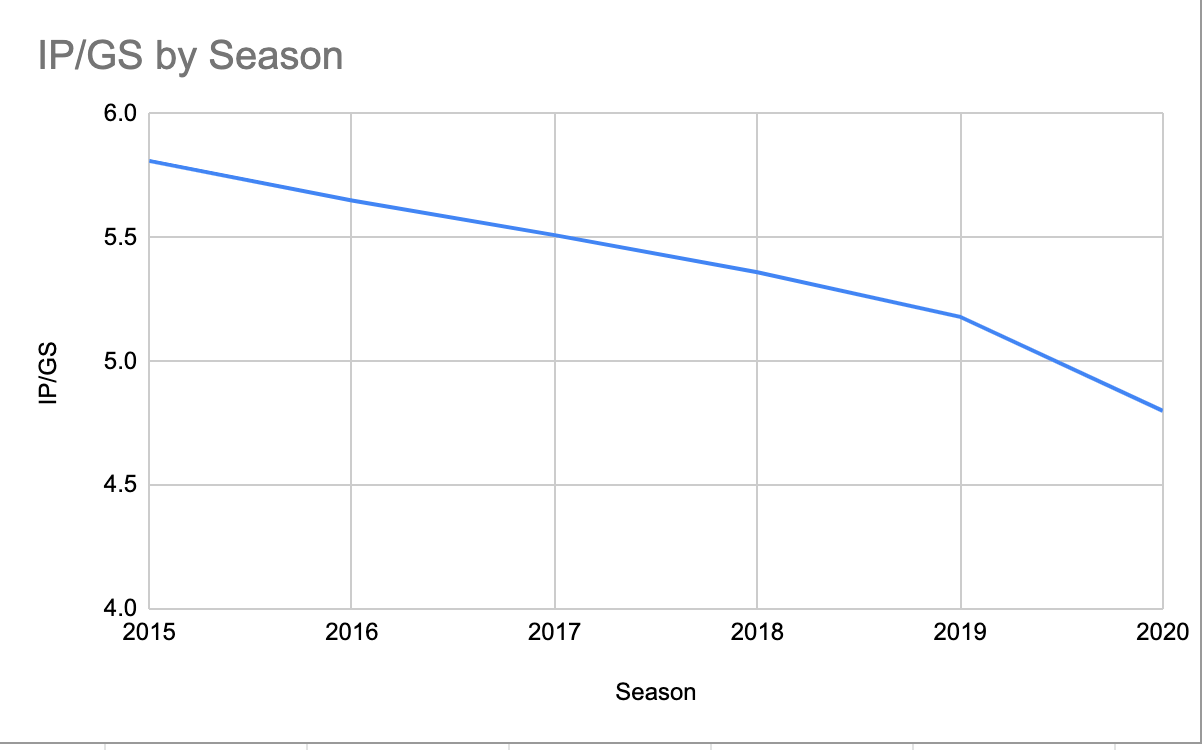 As you can see in the chart above, starters are pitching fewer innings. It was not an issue of ramping up last season. There has been a steady decline since 2015. Based on the trends, when you can find a pitcher who can do deep into starts, they are much more valuable. The same can be said for pitches per start. The chart shows a steady decline, much like innings pitched per start. 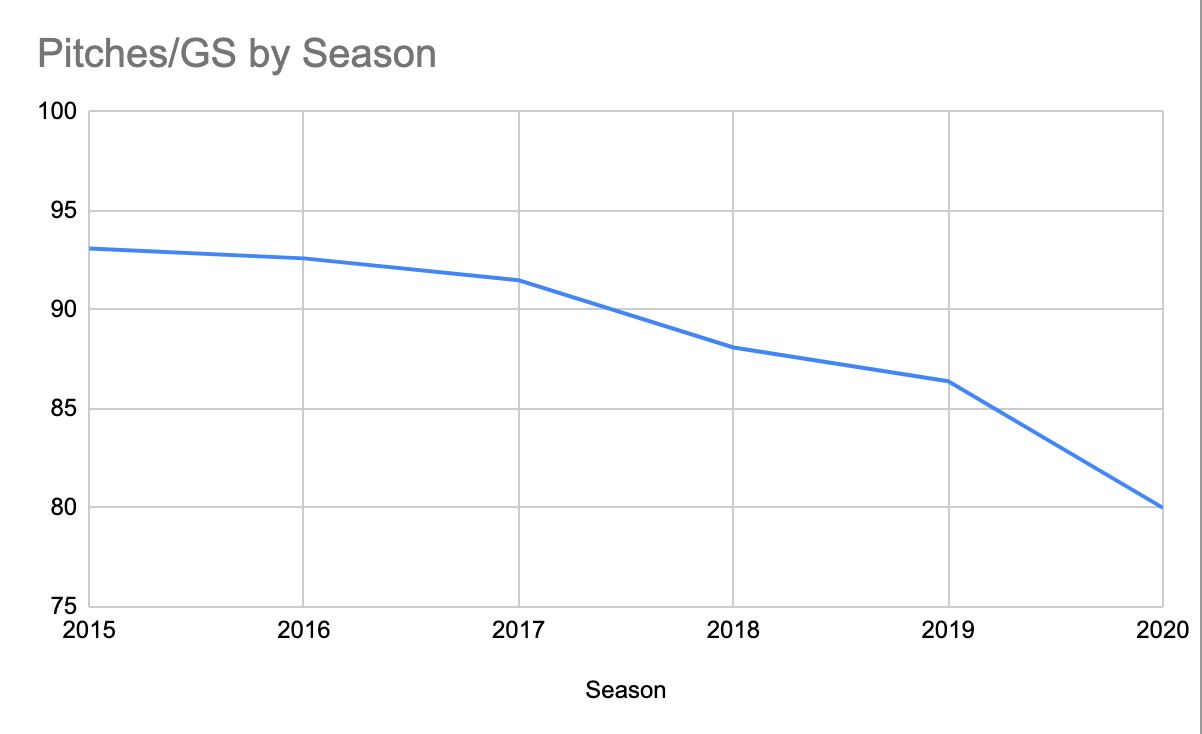 Let’s transition to another stat that can be useful when looking into quality starts and finding pitchers who could be more useful in quality start leagues.

In a study done by Ben Wilson in 2020, he found it useful to look at how many innings it takes a pitcher to earn a quality start. The ratio is simply innings pitched (IP) divided by quality starts (QS). Ben compared this to using home runs per at-bats for hitters. A pitcher who has a low IP/QS has a high chance of racking up quality starts. I have created a table below to look at the top 25 pitchers who performed the best in IP/QS with a minimum of 40 innings pitched.

A shortened season can cause weird things to happen and cause weird names to show up on lists like this. But when you look at it, you see Sandy Alcantara at the top. He is someone who performed extremely well in 2020 despite only having seven starts. He had a quality start in six of those and averaged six innings per start.

You also find many aces on this list like Shane Bieber, Trevor Bauer, Jacob deGrom, Gerrit Cole, and more. Seventeen of the 25 also are among the top 100 in NFBC ADP. Does this mean there is potential value to be had in the other pitchers? Maybe.

Of the top 20 in IP/QS in 2019, eight of those pitchers appeared on the list again in 2020. Four of the pitchers on the list in 2019 did not pitch enough innings to qualify for the list in 2020. This stat is worth monitoring to see if it is sticky from year to year and useful for quality start leagues.

With the understanding of IP/QS, it is obviously important for a pitcher to rack up innings and be able to go deep into starts. Let’s take a look at pitchers who pitched the most innings in 2020 and had the most innings per start.

The leaders in innings pitched are your typical workhorse starters. The name that stands out to me most on this list is Antonio Senzatela, who pitched 73.1 innings over 13 starts. Despite only striking out 5.03 batters/nine and pitching in Coors Field, he posted a 3.44 ERA.

Lance Lynn, German Marquez, and Kyle Hendricks were the only pitchers to eclipse 80 innings in the regular season. Lynn and Marquez did this over 13 starts, while Hendricks only had 12. When we are looking at pitchers who perform well in quality starts leagues, innings pitched is important, but also innings pitched per start. Let’s see who performed well in that category.

To no surprise, six of the top ten in innings pitched in 2020 showed up on this list of highest innings per start. Zach Plesac comes in at the top of this list at 6.9 innings pitched per start. He missed several starts after breaking COVID-19 protocol but was great when he did pitch. Volume is significant in today’s game, and Plesac’s 6.9 IP/GS is impressive.

If we were to continue the list down, only 21 pitchers averaged six innings or more per start. The league average in 2020 was just 4.8 innings per start. To receive a quality start, the starting pitcher must go six innings. Getting starters who can go deep into games can greatly increase your chances of succeeding in quality start leagues.

Again, if you have made it to his point in the article, you likely are not surprised to see the list of names on the quality start leaderboard from 2020. Of the 19 pitchers with at least seven quality starts last season, only four have ADPs outside of the top 100. The reality is if you want a pitcher can get quality starts, you will have to pay up.

But what about the outliers on the list? The pitchers going outside of the top 100 are German Marquez(173.8), Kyle Freeland(579.5), Adam Wainwright(429.6), Aaron Civale(181.6). Two Rockies pitchers in Marquez and Freeland pitch half of their games in Coors Field. You saw Antonio Senzatela on a previous list. This is a team philosophy. The Rockies tend to let their starters go deeper into games. While it is tough to roster Rockies’ pitchers, they are decent values in quality start leagues.

Aaron Civale is another player who benefits from team philosophy. Plesac, Bieber, and Civale were all top 12 in innings pitched per start. Carlos Carrasco came in 29th and would likely have been higher if it weren’t for missing time in 2019 due to cancer. Find teams who let their starters go deeper into starts in quality start leagues.

As I mentioned in the last section, team philosophy matters when drafting pitchers in quality start leagues. Cleveland pitchers went deepest in games by far and posted the highest quality start rate of any team. Is this because their pitchers are just that much better than other teams? Partially. But like Cleveland, the Cubs and Rockies’ pitchers also went deep into games on average.

As you begin to move down the chart of teams IP/GS, the quality start rate drops. I will stress it one more time, drafting pitchers on these teams is significant in a quality start league.

Who To Target in Quality Start Leagues?

As we wrap this article up, let’s examine players who are solid targets in this specific league format based on what we have learned.

Well, if you made it this far, I commend you! This is just the start of some great research I have begun on quality starts. For now, enjoy grabbing some of these targets based on what we discussed for quality start leagues. Be sure to head over to our Draft Kit and check out all our other great content.