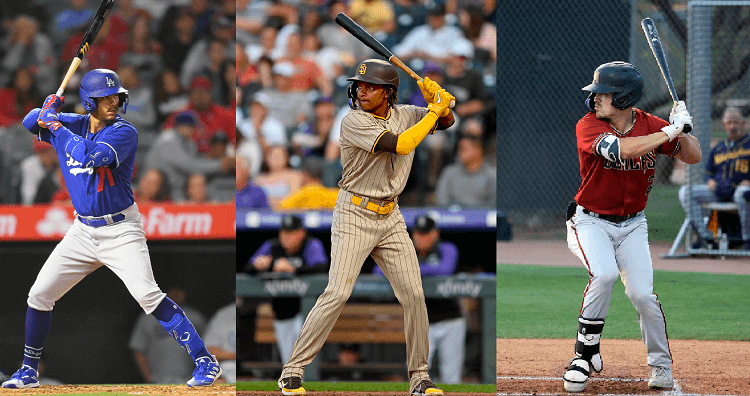 With the month of August now half over, we’re officially entering the stretch run of the 2022 fantasy baseball season. I’ve been doing these prospects to stash articles periodically throughout the season, and with seven weeks left in the season, this will likely be my final one. Stashing prospects can be fun and all, but there’s certainly an elevated level of risk in doing so. We’ve seen the vast majority of prospects struggle this season, but have also seen Witt, J-Rod, and Michael Harris excel along with a recent explosion from Vaughn Grissom. At this point, stashing prospects is more of a luxury than anything else, but if you’re in the position to do so, here are the names I would consider right now.

*Abrams graduated, but many still consider him a prospect, so I’ll include him here.*

I’m a bit surprised that the Nationals didn’t give CJ Abrams a chance to crack their lineup following the Soto trade, instead optioning him to Triple-A. It’s not like Washington is running out Murderer’s Row right now with their leading hitter in wOBA currently being (checks notes) Yadiel Hernandez. Abrams himself hasn’t exactly been stuffing the stat sheet this season, but he hit .294 in 37 July PA with San Diego and has four steals in his first eight games in the Nationals organization. Even if the power takes time to materialize, Abrams can make an impact in the SB department with a solid AVG and maybe a handful of homers sprinkled in. On Sunday evening in the middle of writing this, it was announced that CJ Abrams would be promoted to Washington on Monday. Go get him if he’s available.

Confirming @DanJGlickman: C.J. Abrams will join the National before tomorrow’s series opener against the Cubs. As expected, Abrams will be the first of the five young players acquired for Juan Soto + Josh Bell to appear in Washington.

Vargas received a brief cup of coffee last week with the Dodgers when Justin Turner was on the IL, but was sent back down once Turner was activated. There’s not much left for Vargas to prove in the minors as he’s excelled offensively at every level, including this season with a .288/.377/.485 slash line, 25 doubles, 15 homers, and 12 steals in 99 games. With the Dodgers’ flexibility around the diamond, even an injury at another position could open up playing time for Vargas.

Miguel Vargas makes an impact from AB No. 1.

The @Dodgers' No. 5 prospect rips an RBI double for his first big league knock: pic.twitter.com/53guahlj5R

Another prospect traded away by San Diego at the trade deadline, Esteury Ruiz was immediately optioned to Triple-A by Milwaukee. He never really got a chance to play full-time with San Diego either despite his minor league dominance this season. Since the demotion following the trade, Ruiz is hitting .265 with three doubles, six walks, and four steals in nine games and is currently on a five-game hitting streak. I’m still not sure if he’s going to excel with the bat at the MLB level or be merely average at the plate, but even average at the plate makes him an intriguing fantasy option given his elite speed and willingness to run wild on the basepaths. Ruiz could easily overtake Tyron Taylor who is hitting .225 on the season and .189 over the last two weeks.

Even with the strange addition of Eric Hosmer at the deadline, Triston Casas is still expected to make his MLB debut this season. It probably already would’ve happened if Casas didn’t miss around two months with an ankle injury earlier this season. Casas was on an 8-game hitting streak where he’s cranked seven doubles and one home run before an 0/4 performance on Sunday. With the Red Sox slowly falling out of postseason contention, giving Casas a taste of the Majors makes a lot of sense this season, and he has the AVG/OBP/Power combination worth targeting in 12+ team redraft leagues if/when that happens.

As with Casas, Josh Jung wouldn’t even be on this without a significant injury, his being a torn labrum that required surgery back in March. Due to that, it was uncertain that we’d even see Jung at all this season, even in the minors. But luckily, Jung’s shoulder healed on schedule and he’s been tearing it up since returning to action with five homers in 12 games. Granted, three were at the Complex Level, but Jung has two dingers and two doubles in four Triple-A games. This after a dominant 2021 showing where he slashed .326/.398/.592 with 22 doubles and 19 home runs in 92 games.

Jung’s combination of hit/power/approach gives him plenty of upside with one of the highest floors in the minors as well.  Ezequiel Duran is currently manning the hot corner and hitting fairly well but the DH spot has mostly been occupied by Brad Miller. If Jung continues raking, it’s very possible we see him up in Arlington within the next few weeks.

No. 2 @Rangers prospect Josh Jung connects on his 2nd homer in his 4th game since rejoining the @RRExpress. pic.twitter.com/5j0POltNUa

My #1 overall fantasy prospect, Corbin Carroll’s exceptional performance this season might just lead to an MLB call-up sooner than we thought. Carroll is now up to 21 homers and 29 steals with a .313/.433/.616 slash line in 393 plate appearances and is hitting .299 with four homers and nine steals in just 22 Triple-A games. With his combination of contact skills, approach, speed, and blossoming power, Carroll possesses the biggest potential fantasy impact on this entire list. But will Arizona give him a chance this season? Unlike Baltimore and Henderson below, the D-Backs aren’t even sniffing the postseason this year so it’s far a certainty that we see Carroll this season. I’ll put it at 25-30%. Carroll is more of a luxury stash if you’re in a good spot in the standings and have a bench spot to use.

Is Gunnar Henderson ready for the Majors? Probably. Does that mean Baltimore will promote him this season? Don’t count on it. At this point, I’ll put a 40% chance that we see Henderson in Baltimore before 2023, and a lot of that might hinge on whether Baltimore remains in postseason contention over the last seven weeks of the regular season. After a slow start in Triple-A, Henderson has returned to form and currently has a .293/.400/.525 line at the level with 10 doubles, 10 home runs, and five steals. After yesterday’s home run, Henderson is now two homers and three steals shy of a 20/20 season this year overall. If Henderson gets the call, he’d be a must-add in all formats.

Similar to Juan Yepez in 2021, Alec Burleson has flown up rankings here in 2022 given his performance in Triple-A so far. In 407 plate appearances, Burleson has slashed a robust .329/.371/.543 slash line with 20 home runs and an impressive 15% strikeout rate. There’s no spot for him right now, but I see a few possible paths…

After a breakout 2021 season (.297/18/38, 115 G), Oswald Peraza got off to a slow start this season and found himself hitting just .208 at the end of May, albeit, with five homers and 11 steals in 38 games. Since June 1st, however, Peraza is hitting .295 in 48 games with 11 home runs and 17 steals. He’s been especially hot over the last 30 days with a stellar .309/.378/.580 slash line, six home runs, and nine steals in 90 plate appearances. This performance coupled with an underwhelming Isiah Kiner-Falefa at shortstop could cause the scuffling Yankees to make a swap to try Peraza at shortstop.

Oswald Peraza’s team-leading 16th home run of the season got out in a hurry! pic.twitter.com/wr8mFw5GQo

The addition of Franmil Reyes puts a damper on Matt Mervis debuting this season, but are we really sure Franny in the Windy City will work out? If it doesn’t work out or there’s an injury, don’t be surprised if Matt Mervis gets a shot given how he’s performed this season. In 99 games between Hi-A, Double-A, and Triple-A, Mervis has slashed .312/.373/.603 with 33 doubles and 23 home runs. That includes eight doubles and three homers in his first 19 Triple-A contests. Mervis isn’t a great long-term play or one I expect to ever make a huge fantasy impact, but he’s one of those older prospects that often gets overlooked due to the age (24) that could provide short-term value if given the chance.

No Pitchers to Stash?

Honestly, not really. The only two I’d consider right now are Taj Bradley (TBR) and Hunter Brown (HOU). However, Bradley hasn’t been quite as impactful since his promotion to Triple-A, and Brown is thoroughly buried on the SP depth chart in Houston. Even following the Jake Odorizzi trade, Brown is still 7th in the pecking order with Lance McCuller’s return. Another that could receive a shot given his MLB team’s current state is Cade Cavalli in Washington.

Spencer Torkelson (1B – DET): Not a prospect, but felt like including him. After making Detroit’s opening day roster, Spencer Torkelson struggled to find his footing at the Major League level. In 298 PA with Detroit, he slashed only .197/.282/.295 with five home runs, causing a demotion back to Triple-A Toledo. And unfortunately, Torkelson has been just as bad in Toledo with a .188/.301/.363 line and a 29% strikeout rate in 24 games. I’m very doubtful that we see Tork back in Detroit this season, and even if we do, I wouldn’t look to scoop him up in fantasy leagues.

Gabriel Moreno (C – TOR): While Moreno hit .276 in 60 PA earlier this season for Toronto, his power has gone into hiding this season. In a combined 67 games between Triple-A and the Majors, Moreno has combined for two homers with a .293 SLG/.017 ISO in the Majors and a .391 SLG/.092 ISO in Triple-A. The chance Moreno makes a fantasy impact this season are slim to none, even at the catcher position.