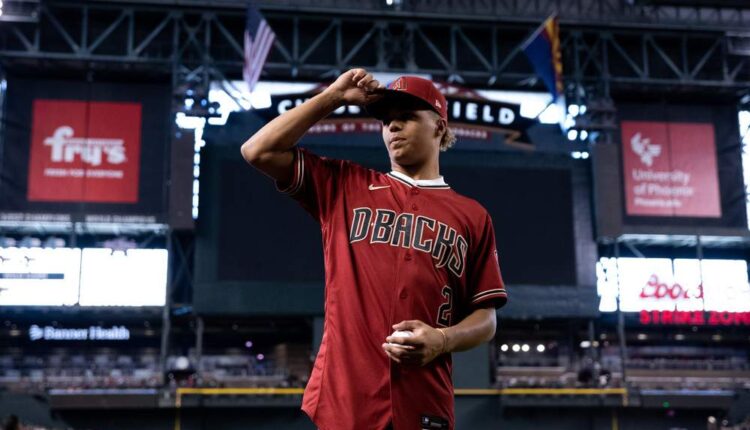 With the 2022 season winding down for both MLB and MiLB, it’s time to look to the future. Specifically, one full season ahead as I try and project the top fantasy baseball prospects for dynasty leagues in 2024. This list will include any potential 2023 draftees and the timeframe we’ll be looking at is pre-2024 season. I’ve broken this down into three parts, continuing with my projected top prospects 10-1 today.

Everyone better get ready for Dylan Crews, because he’s coming, and he’s a bad, bad man on the diamond. For starters, let’s take a look at his two seasons for the LSU Tigers thus far.

Crews projects as a plus hitter with easy plus or better power and average to above-average speed as well. He’s shown an advanced approach at the plate with solid pitch recognition are rarely looks overmatched in his at-bats. If he turns into the type of player he’s capable of, we’re looking at a run-producing machine with 30+/10+ upside to go along with a strong AVG and OBP. At the moment, Crews is the current leader in the clubhouse to go 1.1 in the 2023 draft and lock down the 1.1 for 2023/2024 FYPDs as well.

If I had to guess which top-10 prospect here that you’re the most surprised to see included, it’s probably Harry Ford. The 2021 #12 overall pick got off to a slow start this season, but steadily improved as the season wore on. From June 12th until the end of the season, Ford slashed an exceptional .320/.459/.530 with 32 extra-base hits, eight homers, and 16 steals in 66 games. If that wasn’t impressive enough, Ford also walked at a ridiculous 16.5% while keeping his strikeout rate in check at 21.5%. Ford has the potential to be above-average to plus across the board offensively and could easily find himself inside the top-10 by the end of 2023 if his power continues to develop.

Without question, the biggest risk/reward player in this top 10 is Elijah Green. With some of the loudest tools that draft evaluators have ever seen, Green’s upside is astronomical if everything clicks. That’s the short way of saying that Green’s hit tool has some questions and he’ll have to clean up his swing and miss tendencies if he’s going to capitalize on his double-plus power and speed. In his brief time in the minors this season, all of that was on full display as Green hit .302/.404/.535 in 52 plate appearances with two dingers and a steal, but also a 40.4% strikeout rate.

Elijah Green shows his prowess with a monster Grand Slam to LF. 109 EV. Sound UP 🔊🔊🔊 pic.twitter.com/NkiTBoxFPr

While Marcelo Mayer might have the lowest ceiling of these 10 names, he might have one of the highest floors. That’s not to say he doesn’t possess intriguing offensive potential either, because he most certainly does. Mayer was considered one of the best pure hitters in the 2021 draft, and he proved that in 2022, slashing .280/.399/.489 with 30 doubles, 13 home runs, and even 17 steals. Many expected the bat to be impactful right away, but the speed Mayer showed in 2022 exceeded expectations. Even if he can add 10-12 steals annually, that’s going to be a nice boost to his overall value which could be somewhere close to Corey Seager with the bat.

It honestly wouldn’t surprise me if Druw Jones landed a few spots higher by the time 2024 rolls around. The 2022 #1 overall pick has an elite ceiling that reminds me a lot of Corbin Carroll after he was drafted. It’s a bummer we’ve yet to see Jones in MiLB game action due to his shoulder injury, but the second-generation star’s combination of double-plus speed, a potential plus hit tool, and power projection make him incredibly exciting for fantasy purposes. There’s legit #1 overall prospect upside here if the power ticks up in 2023 as it did with Carroll this season.

At the time of the Juan Soto trade, Robert Hassell was considered by many to be the headlining prospect in the return package going to Washington from San Diego. Well, that changed in a hurry. While Hassell struggled in the Washington org following the trade, Wood continue to flourish, finishing the season with 12 homers, 20 steals, and a .313/.420/.536 line across 348 plate appearances. Wood combines massive raw power with great athleticism and a solid approach at the plate. As long as he continues to unleash that raw power more frequently in games without sacrificing his approach, Wood could wind up as an early-round fantasy beast.

Could be the top prospect in a few years. pic.twitter.com/CTZTcSoYkt

The first of two Jordans on the list, Jordan Walker quietly excelled all season for Double-A Springfield. In 536 plate appearances, Walker cranked 31 doubles and 19 home runs with 22 steals and a .306/.388/.510 slash line. The elite raw power has always been apparent, but Walker’s pure hitting ability has exceeded the expectations I had when he was drafted in 2020. He’s also providing way more speed than anticipated as well. I’m still not a believer in Walker being a 20-steal guy moving forward, but even at 10-15 steals annually, that will be a nice value boost on top of 30-plus homers and a good AVG/OBP.

Entering the 2021 draft, Jordan Lawlar was the prospect I was the highest on from that class. He’s done nothing but impress ever since, showcasing a big-time power/speed blend that has prospect hounds such as myself salivating. Playing the majority of the season at just 19, Lawlar slashed .303/.401/.509 with 16 homers, 39 steals, a 12.4% walk rate, and a 25.1% strikeout rate. Lawlas’s plus speed is apparent and his ability to get on base at a high clip is encouraging as well. If Lawlar continues to develop his power stroke, there’s legit 20/25 potential here as a well-rounded five-category fantasy shortstop.

Some might pout Jackson Chourio #1, and there’s absolutely nothing wrong with that. In just a few months’ time, Chourio went from an intriguing international signing with upside to one of the top and most exciting prospects in the game. Overall, Chourio slashed .288/.342/.538 in 439 plate appearances with 30 doubles, 20 home runs, and 16 steals. His approach can be a tad on the aggressive side and he battled some swing and miss issues throughout the season, but nothing that concerns me too much for an 18-year-old facing older and more advanced competition. With his elite all-around skillset, Chourio has massive upside for fantasy and could take over the top spot early in 2023.

Jackson Chourio got a green light. He didn’t miss. pic.twitter.com/7ScaDuYUeG

At this point, most are expecting a two-prospect fight for the top spot once Carroll/Henderson graduate between Elly De La Cruz and Jackson Chourio. After hinting as his massive upside in 2021, De La Cruz produced a season for the ages in 2022. In 120 games (513 PA), De Le Cruz racked up a ridiculous 28 home runs and 47 steals (6 CS), with a .304/.359/.586 slash line. With plus to double-plus power and speed, no other prospect on this list can match Elly’s offensive ceiling. However, De La Cruz still needs to continue refining his approach and keep his strikeout rate in check. If that happens, we’re likely looking at a fantasy monster.