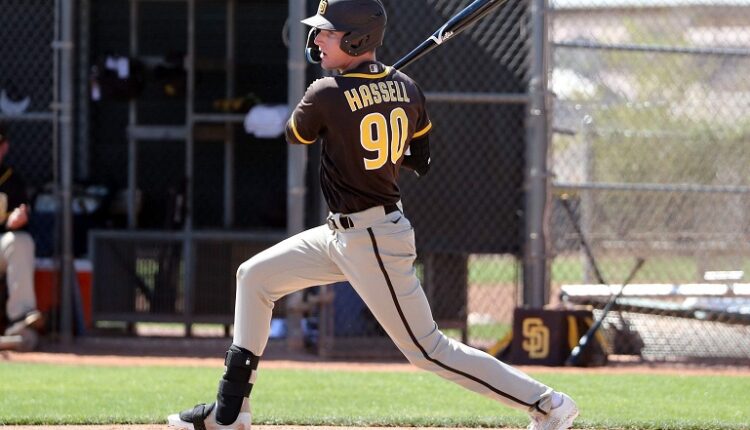 With the 2022 season winding down for both MLB and MiLB, it’s time to look to the future. Specifically, one full season ahead as I try and project the top fantasy baseball prospects for dynasty leagues in 2024. This list will include any potential 2023 draftees and the timeframe we’ll be looking at is pre-2024 season. I’ve broken this down into three parts beginning with my projected top prospects 30 through 21 here today. Part 2 (20-11) and Part 1 (Top-10) will be out soon.

Let’s start this list off with a bang. Everyone loves a breakout right? Jose De Paula popped up on my radar a few months ago and the more I’ve dug in, the more impressed I’ve been. In 53 games for the Dodgers’ DSL affiliate, De Paula slashed .350/.448/.522 with 20 extra-base hits, five home runs, and 18 steals. He also displayed an encouraging plate approach, registering more walks (32) than strikeouts (31) in his 223 plate appearances. With a 6’3/180 listed frame, De Paula already has evaluators drooling and should fill out that frame a bit as he matures. There’s already impressive raw power and good speed in this profile, making De Paula a prime candidate to break out in a major way next season.

With one of the top bats in the 2023 draft class, Max Clark projects to jump very high into the top 400 once he’s drafted next summer. This is a player that should hit for a high AVG with plenty of power and solid speed as well. My Fantrax Toolshed cohost, Chris Clegg, and I were able to interview Clark this past offseason, and he certainly had the right mindset which you love to see. Given his all-around offensive profile, Clark has the upside of an all-star caliber outfielder if everything clicks. He currently projects as a top-3 pick in 2023-24 FYPD drafts.

Max Clark (23 IN) BEAUTIFUL! Clark has simply raked all week! Look at this explosion off the barrel.. The #VandyBoy commit is so tooled up. #WWBA pic.twitter.com/fCy6KPGYxP

If it wasn’t for a knee injury that sidelined him for the 2nd half of the season, Emmanuel Rodriguez would be ranked much higher than he currently is. I’m extremely confident in saying that. In just 199 plate appearances before landing on the IL, Rodriguez slashed .272/.493/.552 with nine homers, 11 steals, and more walks (57) than strikeouts (52). In those two months, Rodriguez displayed an elite plate approach, plus raw power (.280 ISO), and even an element of speed. Moving forward, he projects as a .270ish hitter, but with an elite OBP, 25+ HR, and even double-digit steals.

If it wasn’t for guys like Ricky Tiedemann and Andrew Painter, the Tink Hence breakout would be garnering a lot more attention than it already is. In 16 starts for Lo-A Palm Beach, Hence posted an exceptional 1.38 ERA, 0.88 WHIP, and a whopping 41.5% strikeout rate. Hence’s elite arm speed allows him to pop mid to upper-90s with regularity and he’ll miss bats at a high clip with his plus curveball and a changeup that’s flashed above-average at times. On top of that, Hence has shown impressive command and control for his age, issuing free passes to only 7.7% of the batters he faced. The arrow is firmly pointing up here and a spot in the top-25 is next. Maybe higher.

Another potentially surprising name for this list, Miguel Bleis has incredible hype surrounding him right now. All the reports out of Red Sox camp and the complex level, in general, have been extremely promising. In 40 games, Bleis racked up 23 extra-base hits, five home runs, and 18 steals with a stellar .301/.353/.543 slash line. His blend of plus speed and potentially above-average or better raw power gives Bleis an exciting ceiling for fantasy if he can mature as a pure hitter. Bleis is currently a bit aggressive, but profiles similar to another Red Sox outfield prospect, Ceddanne Rafaela, with maybe even a smidge more upside overall. If he makes strides with his approach at the plate, Bleis is going to explode up prospect rankings.

Every year it feels like Seattle has a big-time prospect breakout, and Gabriel Gonzalez could be the next in line. He’s already risen into my top-100 overall and should only continue ascending in 2023 and beyond. After dominating at the complex level, Gonzalez got the bump to the Lo-A California League as an 18-year-old and more than held his own at that level with a .400 OBP in 32 games with two homers and four steals. Overall, Gonzalez accumulated seven homers and nine steals with a .321/.410/.468 line in 68 games this season. So far, the hit tool, approach, and speed have been very promising, and Gonzalez has hinted at further power development as well. If that power development happens, watch out5

While Hassell has fallen off a good bit over the 2nd half of the season, I’m still a believer in Hassell’s ability to be a .280/15/25+ type of hitter long-term that should bat near the top of the order. While his profile no longer fits the top-10 mold, Hassell still has a bright future and represents a solid buy-low opportunity this offseason. There’s still a potential above-average or better hit tool here with plus speed as well. But that power is the real question and the determining factor on just how impactful he can be for fantasy.

If my flag wasn’t already firmly planted with Chase DeLauter in my FYPD rankings, it certainly is now with his inclusion in an article like this. A dominant final two seasons at James Madison vaulted DeLauter into the first round, and his exciting offensive profile should vault him high up rankings next season. DeLauter possesses easy plus or better raw power with at least above-average speed as well. The hit tool is what some people question, but not so much in my eyes. Is it slightly behind his power/speed blend? Sure. But DeLauter has a chance to be an average to above-average hitter that posts higher OBPs as well given his approach at the plate. Don’t you dare sleep on DeLauter.

An absolute shot by Chase DeLauter to get the Dukes on the board, 2-0.#GoDukes pic.twitter.com/ioicbccWcN

Earlier in the season when both Noelvi Marte and Edwin Arroyo were still in the Seattle organization, I heard that some within the organization preferred Arroyo to Marte. Now, I don’t believe that’s negative for Marte but more of a glowing endorsement for Arroyo who went over to Cincinnati with Marte and others in the Luis Castillo trade. Arroyo was tearing up Lo-A before the trade, slashing .316/.385/.514 with 13 homers and 21 steals in just 87 games. A late-season slump dropped his overall line a tad, but the all-around upside here is definitely enticing thanks to potential above-average or better tools across the board if he continues to add strength and power. Add in Great American Small Park and Arroyo’s outlook gets even brighter for fantasy purposes.

In two calendar years, Evan Carter has ascended from a relatively unknown and surprising top-50 pick to a locked-in top-50 prospect for fantasy. The ascension isn’t over either. This past season, Carter demonstrated his usual elite patient approach while also showcasing his speed and budding raw power. The game power still lags behind a bit, but it should only be a matter of time before a lot of those doubles begin clearing the fence, especially if Carter continues to add good bulk. If that happens, we’re looking at a well-rounded, five-category fantasy star with a higher floor than most as well.

A Frisco first for Evan Carter!

The No. 3 @Rangers prospect belts his first Double-A homer for @RidersBaseball. pic.twitter.com/b9cHhKPV0w