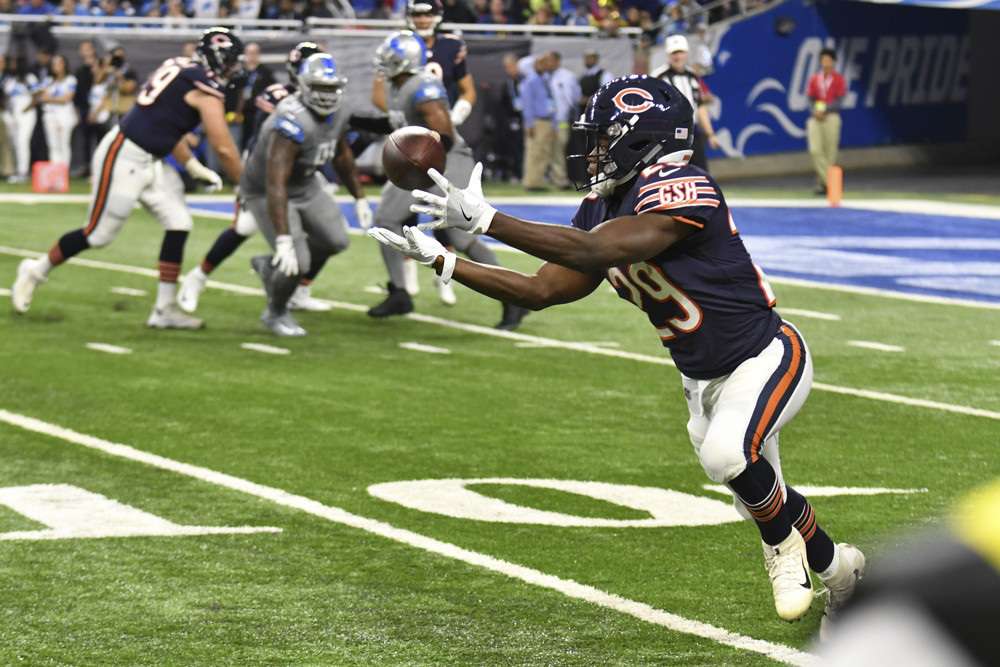 Fantasy Football drafts are great. Nothing is better than selecting a team of “your guys” and going to war with your friends, or enemies week after week. Standard formats are becoming a thing of the past, being replaced by the ever popular “PPR” format. Simply put, PPR is points per reception. All this means is that players that catch the ball receive a bonus in the overall scoring.

Sounds easy enough right? Antonio Brown is worth more, while players like Le’Voen Bell and Alvin Kamara also get a huge boost. Well, yes and no. While that is true, the real beauty of the format is to find value in players who might otherwise go undervalued. This is what we are going to talk about today. I am going to show off some of the less obvious targets to go after in your fantasy draft that are more valuable in PPR. Feel free to send any questions on Twitter @MattWi77iams if I do not cover someone you are curious about. So without further ado, let’s take a look at the players.

Whether you do PPR, Standard, or somewhere in between, head on over to Fantrax to start or join a league today!

PPR Targets That Could Win You Your League

Did you know that only two wide receivers have caught at least 90 passes in each of the last four seasons? One is Antonio Brown, which is a big shocker, I know. The other one is Golden Tate. Coming into 2018, Tate is just the seventh wide receiver in NFL history to put up 90 receptions in four straight seasons (A.Brown, T.Holt, M.Harrison, D.Thomas, L.Fitzgerald, J.Rice). The chart below takes a look at the reception leaders for 2017 (games played/targets/recpetions). 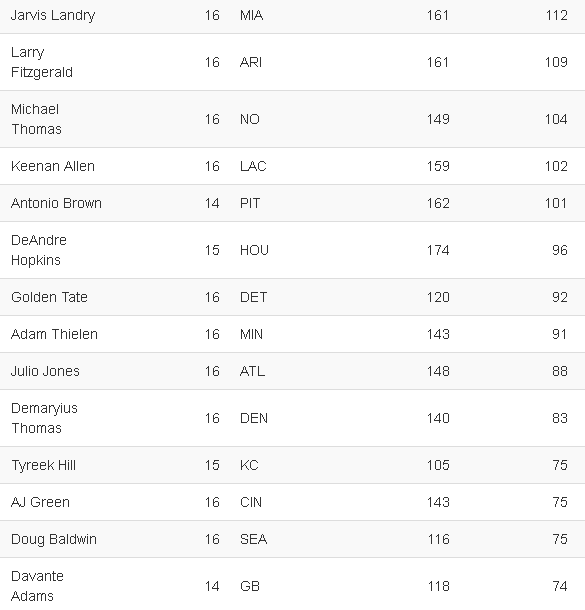 In other words, Golden Tate has been fantastic and consistent. A timeshare split with the talented duo of Marvin Jones and Kenny Golladay may hinder his standard league value as far as touchdown production goes. However, Tate seems like a lock for 90 receptions and 1,000 yards. The man is undervalued in PPR leagues folks.

Welcome to Chicago Matt Nagy. The newcomer will be the Bears’ head coach going into the 2018 season, and fantasy owners should get excited.  Cohen racked up just 140 touches in 2017 despite playing for a Bears’ offense that could have used a spark. Matt Nagy is here to fix that. I would expect Cohen to be targeted close to 100 times this season while working behind Jordan Howard.

I would temper expectations a bit as far as carries in standard leagues are concerned, as Howard is a solid back who should absorb most rushing opportunities. This should not matter to fantasy owners in PPR though. Tarik Cohen has what it takes to be a PPR monster with his breakaway speed and big-play ability in this newly installed Nagy offense. Draft Cohen in PPR.

Chris Thompson ended 2017 with 804 total purpose yards (510 through receptions), in a near breakout season. I say “near”, since Thompson’s campaign was cut short due to a broken fibula he suffered in Week11. Fantasy owners can use this to their advantage, as Thompson’s ADP is being held down due to his final stat line. He tallied 39 receptions, which turned into four touchdowns in just 10 games last year.

What does that look like over a full season? 62.4 receptions, 816 yards, and 6.4 touchdowns, as just a receiver. Christian McCaffrey, for example, ended 2017 with 80 receptions for 651 yards and five touchdowns through the air. See how exciting Thompson could be if healthy? Rookie Derrius Guice should not impact Thompson’s role as a pass-catching back, and only Jamison Crowder should rival him for the team lead in receptions. Sorry Jordan Reed, no one believes you can stay healthy.

Among tight ends, only Travis Kelce, Zach Ertz, and Delanie Walker have tallied at least 100 targets over the last three seasons. How many have done it over the past four seasons? One. Delanie Walker. That statistic in itself should be enough to convince you of Walker’s PPR value. During that four-year span, Walker has caught 296 passes, the second-most among tight ends (Kelce).

Free agent Dion Lewis and second-year Corey Davis could certainly absorb some targets this year. However, Marcus Mariota is healthy and already comfortable with Walker. The bottom line here is that Delanie Walker is about as consistent as they come, and gets a huge boost in value in PPR formats.

Let’s take a moment and appreciate how incredible, and improbable Delanie Walker’s career has been. #Titans #TitanUp https://t.co/G4iSHuulbQ

The Carlos Hyde-Nick Chubb preseason battle is what is being perceived as the “matchup” to watch for Browns’ fantasy players. What if I were to tell you there was an RB1 (in PPR) on the team and it is neither of them? I am of course talking about Duke Johnson (his name is on the heading after all), who has turned into a sure thing in PPR formats.

Johnson’s value is also severed from the “winner” of the Chubb-Hyde battle. They are fighting for early-down carries, while Duke is solidified as the third-down and pass-catching back. Johnson has had at least 50 catches, 70 targets and 500 receiving yards in all three of his NFL seasons, breaking out for 74-93-693 last season. Touchdowns will put an anchor on his standard league upside, but Johnson is a sure thing for another 100-target, 75-reception campaign in 2018. Let someone else worry about the Hyde-Chubb debate and draft Duke Johnson.

Joe Mixon finally looks like he is ready to take over as the lead back in Cincinnati. Leaving, Bernard as the third-down and pass-catching back for the Bengals. This situation is a bit clearer after Jeremy Hill left town this offseason. The best part? You can draft Bernard late, like very late.

In 2017 Bernard averaged 9.5 PPR points per game, which was the lowest of his career. From 2013-16 he carried average PPR scores of 14.1,14.5,11.3, and 12.4. I am willing to overlook his career low total last season as he was in a three-back split. Hill has moved on and that number should see a tick back up to when he was only splitting carries with Jeremy Hill (pre-Mixon).

Hill has tallied 200 carries every season since entering the NFL, except for 2017 in which he played in just seven games due to injury. Now, Mixon will be the bell-cow back in Cincinnati, but Bernard is being treated like he doesn’t exist. This is a mistake, especially in PPR. Bernard makes for one of the smartest late-round flex picks, who could be an absolute steal if an injury were to strike Joe Mixon.

The Eagles have one of the best offensive lines in football and their starting running back is Jay Ajayi. I don’t trust him. “But Matt, he signed with Drew Rosenhaus and is in a walk year. He is going to break out.” Ehh, I don’t think so. Ajayi has knee concerns and has little to no value as a pass catcher. Pass. If I am going to invest a draft pick in an Eagles running back, I will wait until the later rounds and grab Corey Clement.

Darren Sproles will be returning for his final season in 2018, but the torch has clearly been passed to Clement after last years postseason heroics. Clement is an explosive weapon that the Eagles are likely to utilize this season. We are looking at a poor man’s Duke Johnson, but with a clearer path to carries.

Let’s talk about market share folks. Jarvis Landry had 161 targets for the Dolphins in 2017. He now plays for the Cleveland Browns. Someone is going to catch those passes this season. Enter Kenny Stills, who finished with 105 targets as the WR28 last year in PPR.

A breakout from Davante Parker is certainly possible, but even if he were to, Stills offers amazing value at the end of your draft. Parker is not going to assume all of those targets left on the table by Landry, and it’s not a sure thing he even improves. Stills offers a safe floor with the opportunity for a huge jump.

Kenny Stills has been significantly better than DeVante Parker in his last two years in Miami. (Stills only caught 27 balls in 2015).

I wrote a piece earlier this preseason titled “Who could be this year’s Alvin Kamara?” Guess who I was talking about? Nyheim Hines. Needless to say, living up to the hype Kamara brings is a long shot. However, the two have striking similarities which could lead Hines to be a steal in PPR formats. Take a look at the article for more information.