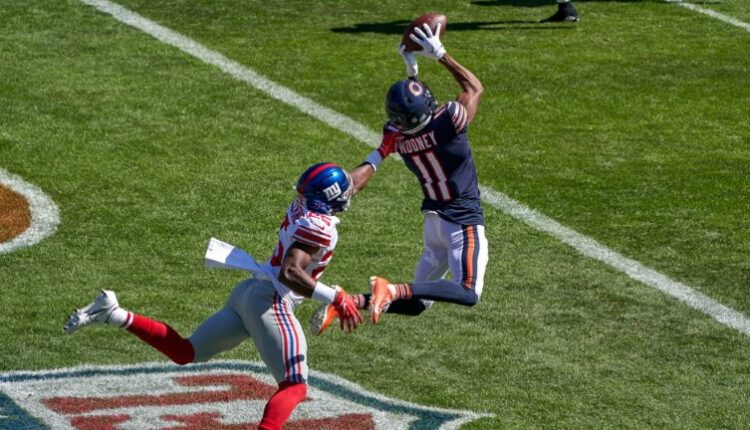 Wide receivers are the most talked-about position in football, especially this offseason. Not only are big name receivers on the move in free agency and trades, but six rookies were taken in the first round of this year’s NFL Draft. In relation to fantasy football, two recent rookie wide receivers, Justin Jefferson and Ja’Marr Chase, each finished in the top-8 at the position the last two seasons. The focus on wide receivers has never been as extreme as it is right now.

With that said, there are inevitably fantasy football winners and losers as a result of the NFL Draft. Of course, certain rookies have it better than others based on their landing spot. The purpose of this piece, however, is to discuss which current NFL players’ fantasy values will feel the effects, whether good or bad. With the NFL Draft behind us, the 2022 fantasy football season is that much closer. So, let’s see which wide receivers we should be getting excited about and who we may feel a bit nervous for ahead of this year.

In one of the more surprising moments of the NFL Draft, Marquise “Hollywood” Brown was traded from the Ravens to the Arizona Cardinals. Brown is, by far, the most-targeted wide receiver in Baltimore over the last three years. As he heads out west, Hollywood leaves behind an average of 105 targets per season in this run-heavy offense. Though not the same magnitude of a move, the Ravens’ third-most targeted wide receiver last season, Sammy Watkins, is also on the move in 2022 as he’s now a Green Bay Packer after signing in free agency.

That leaves second-year wide receiver, Rashod Bateman, as a clear winner at the wide receiver position, especially for fantasy football. With just 12 games played, Bateman logged six or more targets in eight of them in his rookie season. The Ravens did not add any wide receivers to the roster with any of their NFL Draft picks. They will likely add a veteran or two, but Bateman and tight end, Mark Andrews, will dominate Lamar Jackson’s target share this season.

Lamar Jackson has never supported a WR1 season in fantasy football. The fact of the matter is that Baltimore runs the ball often and well. That will give me a bit of pause during draft season when considering Bateman. He is a rock-solid WR2 with a WR1 ceiling. Mark Andrews has a fantastic shot at repeating his 2021 TE1 finish.

The Chicago Bears offense, right now, is like the aforementioned Baltimore Ravens’ offense’s kid brother. Justin Fields is a mobile quarterback, but we simply haven’t seen enough of him. They have a capable backfield, but the offensive line lacks talent and discipline. Lastly, they have a young, up-and-coming wide receiver in Darnell Mooney, as well as a pass-catching tight end, Cole Kmet.

Following the NFL Draft, Mooney is a big winner for the 2022 fantasy football season. Allen Robinson is now a Los Angeles Ram following his exit from Chicago in free agency this offseason. Wide receiver remains a glaring hole on this team after the Bears waited until pick 71, their third pick of the draft, to select 25-year-old wide receiver, Velus Jones Jr., who is older than Darnell Mooney.

Jones Jr. will likely serve as a key special teams asset for this team. He does have the ability to make plays after the catch, but will likely spend most of the year behind Byron Pringle and even Equanimious St. Brown on this depth chart. The Bears need to develop Justin Fields and, to do so, need experienced pass catchers on the field. Fields has the strongest connection of this bunch with Mooney. That won’t change this upcoming season.

This is definitely one of the more low-key winners at wide receiver following the NFL Draft. Of course, we know Justin Jefferson is the top pass catcher in Minnesota. Even Adam Theilen is a good bet to average at least 15.0 PPR points per game catching passes from Kirk Cousins. K.J. Osborn, however, is a player that most managers know from their fantasy football waiver wire last season, but will have an impact yet again in 2022.

The Vikings’ new head coach, Kevin O’Connell is a branch from the “Sean McVay coaching tree”, specifically serving as the L.A. Rams’ offensive coordinator the last two seasons. I expect him to mix Osborn into Minnesota’s game plan, especially since the team did not take on any additional wide receivers in the NFL Draft.

Given that Adam Theilen is now over the 30-year old age hump, and has shown to struggle with injuries, we could be having déjà vu as fantasy football managers this season if Osborn is, again, asked to step up as the team’s WR2. He will be worth a late-round flier given his production when called upon last season, as well as his lack of competition for his role ahead of this season. Consider him a weekly flex play and a valuable wide receiver handcuff.

Chark is in Detroit on a one-year deal for this upcoming NFL season. This, to me, is one of the more surprising free agent wide receiver signings of the offseason as I expected Chark to join a team with a better quarterback upgrade than Jared Goff given that he could finally pick where he was to play. It’s conceivable that Goff is on the outs with the Lions after this season if they are eyeing up a potential franchise quarterback with a projected top pick in next year’s NFL Draft. So, Chark could be getting an even better quarterback upgrade in Detroit in 2023. That’s if Chark returns, himself, with a new contract.

To make matters worse for Chark, the Lions traded up over 20 spots in the first round of this year’s NFL Draft to select wide receiver, Jameson Williams. Once he recovers from his January ACL tear injury, Williams is going to be a star for the Lions. He is lightning fast and has shown he can handle a heavy workload. In his final collegiate season, Williams racked up 1,572 yards on just 79 receptions and scored 15 touchdowns.

Williams, like Chark, can stretch the field and poses a downfield threat to defenses. Chark, however, is five years older, with an injury history of his own, and again, is only on a one-year deal. I don’t expect Williams back on the field any time soon. The Lions have no reason to rush him back at just 21-years old. So, Chark does have value this fantasy football season as a late-round draft pick. I just don’t think Goff is capable of consistently connecting with him downfield. Chark’s dynasty value is completely up in the air following the NFL Draft and the Lions’ decision to select Jameson Williams.

I want to be clear that Dionte Johnson is the Steelers wide receiver I want for the 2022 fantasy football season. The reason I have him as a post-NFL Draft loser is due to the uncertainty of his future in Pittsburgh. With the wide receiver market as wild as it is, not only do I expect Johnson to seek a major deal from the Steelers next offseason, but believe he ends up playing somewhere else in 2023.

This is all a result of the Steelers’ selection of George Pickens with the 52nd pick in the second round of this year’s NFL Draft. Pickens is a player that slid in this year’s draft, but he landed on a team that has a very successful history of developing wide receivers. He has the ability to line up all over the field which bodes well for the team’s other starting wide receiver, Chase Claypool.

It’s clear, based on production, and in his own words, that Claypool is more comfortable playing out of the slot. If Pickens spends most of his playing time lining up wide, then Claypool becomes a mismatch for opposing defenses as the Steelers slot receiver. This recipe should open things up for Dionte Johnson, as well. Again, I think Johnson is in for a monster year with a lot of receptions especially, per usual. I just believe, by bringing in Pickens, Pittsburgh is preparing a contingency plan for when Johnson walks in free agency. He could be the odd man out and the one of the bigger named receivers to be on the move next season from a financial standpoint.

I am becoming increasingly nervous about Rondale Moore’s dynasty value by the day. In an offseason where James Conner, Chase Edmonds, Christian Kirk, A.J. Green, and Zach Ertz were free agents, three of the five are set to return to Arizona. For a hot second, a lot of touches could’ve been vacated from this team and available for Rondale Moore’s taking. We now know that Conner, Green, and Ertz will be back, keeping the majority of Kyler Murrays’ weapons together alongside both DeAndre Hopkins and Rondale Moore.

We also now know that DeAndre Hopkins is going to serve a six-game suspension for PED usage. Knowledge of the impending suspension could have motivated the team to trade their first-round pick for Marquise “Hollywood” Brown. Either way, Moore appears to be trending toward another season of being a gadget player or deep threat that’s mixed in here or there. As of now, I would consider stashing Moore on my redraft league benches and that’s about it. He will battle A.J. Green as the third option in this Cardinals passing game.