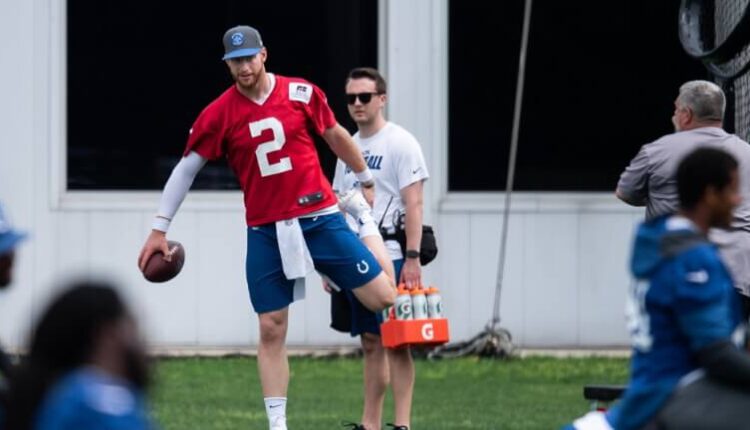 Now that the draft has come and gone, let’s take a dive into the post-draft outlooks of the four teams in the NFC East. For my money, the Eagles may have had the best draft out of all of the teams in the league. The other three teams….well, I’m not so sure they’ve made themselves better. Without further ado, let’s get into it!

The Commanders made a (questionable) splash in the offseason by trading for the frustrating former Colts’  QB Carson Wentz. He had one near-MVP season, and teams have been chasing that talent since. He’s no doubt an NFL QB, but whether or not he can be the caliber to take a team to the playoffs has been in dispute. Depending on who you ask, Wentz may not be much of an improvement over Heinicke, but he’s no doubt the starter, based on his salary, and the move to trade for him. I have Wentz rated outside my top 20 fantasy QBs this year, but he should only be considered in a no-QB draft strategy. The training camp battle will be for backup, as Sam Howell was drafted in the 5th round to potentially develop into a starter. He’s a potential late-round dynasty selection, but shouldn’t be on redraft radars.

Antonio Gibson is the unquestioned #1 back in this offense. With his skillset, owners were excited for him to be an every-down back with the departure of J.D. McKissic, but he decided to stay with Washington after being courted in free agency. McKissic is more of a waiver wire target if you can get him, but Gibson is my 15th-ranked fantasy running back in the league (he finished 14th last year). Injuries tend to be an issue for him, so I like the depth they got by adding Brian Robinson. Jaret Paterson was my dark horse value last year, but he never got the touches, and I imagine the team will only keep three backs on the roster. The battle will be between Robinson and Patterson in the preseason.

Curtis Samuel had an injury-riddled season last year, but we know what he’s capable of. He’ll be a starter. As will Terry McLaurin, the best WR on the team, as he’s in search of a new big contract. He’s deserving of one as well, as he’s finished top 24 in fantasy WR production all three years of his career. The team also added Jahan Dotson out of Penn State to their receiving corps. I don’t know that he’ll find much success with Carson Wentz behind center, but he’ll certainly start. The position battles here will be for making the roster, as opposed to being fantasy relevant.

The battle here will be for the starting TE of the team, between Logan Thomas and John Bates. When healthy, Logan Thomas finished the 2020 season as the 7th ranked fantasy TE. Last year, he was injured for most of the year, and John Bates got his opportunity to start the last few games of the season, and managed to score a TD, but received no more than 4 targets in any particular game. I’d put my money on Logan Thomas for the 1st string TE. Turner and Reyes will either be blocking depth or fighting for roster spots.

As much as people love “Minshew Mania,” there’s absolutely no doubt in anyone’s mind who the starter of this team is. Jalen Hurts is the unequivocal #1 QB. He finished last year as the fantasy QB8, but I have him ranked as my QB4 on the year, as the team upgraded dramatically with their trade for AJ Brown at WR. There are no fantasy-relevant battles at this position.

Miles Sanders is a consensus RB28 this year, and I think that’s about right as Jalen Hurts caps his upside both rushing and with red-zone TD potential. He also continuously battles injuries, which is tough to deal with at such an important and scarce position. The training camp battle will be for backup running back, as they will likely get the chance to start a few games, and will also probably be used on passing downs. I lean Boston Scott, as he got the nod a lot last year, and has great hands. Regardless, after Miles Sanders, these are waiver wire targets.

The Eagles had an A+ offseason. They drafted Jordan Davis at DT, who is a freak of nature at 6’6″, 340lbs, and can run like a linebacker. He’ll be a beast with however many snaps he gets. They bolstered their o-line with Jurgens in the second round, took Nakobe Dean in the 3rd, who only fell because he may not play this year due to injury, AND they traded for AJ Brown and signed him to a four-year, $100M deal. Wow. What DeAndre Hopkins did for Kyler Murray, AJ Brown will do for Jalen Hurts. Mobile QBs become nearly unstoppable when they have a guy they can simply throw it up to, and know they’ll come down with it. I have Brown ranked as my WR9 this year, and that could be low. Smith finished the year as WR30 last year, and is consensus WR37 right now, which is likely low. Watkins and Pascal will battle for the 4th target on this offense, but they’ll both make the team. After that, preseason performance will likely determine roster spots. But the Eagles have two potential high fantasy draft pick receivers, and that’s exciting for Philly fans. Love this offense.

This is the Dallas Goedert show. I have him ranked as my TE6 this year, and I think with Zach Ertz gone, he’s jumped into the big boy list of Tight Ends you can draft with a high pick (Andrews, Kittle, Kelce, Pitts, Waller). He finished the year at TE6, and I see no reason he won’t repeat that, or better it, considering that AJ Brown will make his job easier with his presence alone. The rest of these players aren’t fantasy relevant, unless there is an injury.

The Cowboys are Dak’s team. There’s no doubt about it. With his injury history, you’d think they’d be in the sweepstakes for a better backup QB room (e.g. Baker Mayfield), but perhaps they are happy with Rush. Dad finished last year as QB9, and I have him as my QB11 this year. He lost his WR1 in Cooper, but he’s gaining Tyler Smith (OT out of Tulsa), who the Cowboys drafted with their first-round pick. In Dak’s best years, he had a stout O-Line, so I like the Cowboys move there.

Ezekiel Elliot is no longer the workhorse back that many of us remember him to be. Not because he can’t do it, but because the Cowboys want to make sure Tony Pollard gets change of pace touches, and it keeps Zeke relatively healthy. Zeke is still the lead dog in this backfield and continues to get red zone and goal-line touches. He finished RB6 last year, and I have him ranked at RB18 this year. All four of these backs are likely to make the roster, but I think Zeke and Pollard are the only fantasy draft-able players.

The Cowboys lost Amari Cooper and Cedrick Wilson, but they planned to replace some of that production with Jalen Tolbert out of South Alabama. They were considering taking him with their 2nd round pick, so they really got a steal in their eyes. He had 7, 100-yard receiving games last year, and could be a potential big-play threat for them. Don’t be surprised if you see him usurp James Washington on the 1st string. Lamb and Gallup are great fantasy assets as Dak Prescott will throw for 4,000 yards in his sleep. I wouldn’t reach for any of these assets, but if you’re in the middle rounds and they fall to you, scoop them up.

This is Schultz’ TE1 to lose. It’s not going to be much of a battle and they drafted Ferguson for depth. I have Schultz as my TE7, but there’s a big gap between TE1-6 and 7 on down. I’d pick Ferguson up on the waiver wire for depth, but he won’t challenge Schultz for the starting gig.

Sheesh. It looks like this is Daniel Jones’ last shot to be the starting QB for the Giants. There are people that think he isn’t good enough. There are people that think the roster has never been good enough. There are people that think he’s simply had bad injury luck. Perhaps all three are possible. One thing I know for sure is that if the Giants get off to a rough start, Tyrod Taylor will get a shot to start by Week 7 or 8, as they’ll likely try and tank for a QB in the draft next year. I’ll be avoiding all of these players in fantasy drafts. If you’re still on the Daniel Jones bandwagon, you’re braver than this guy (pointing to myself). Just to finish this out on a positive note, the Giants drafted Evan Neal, an OT from Alabama with their 1.7 pick. He was thought by many to be the best pick in the draft, so that should give Jones more time in the pocket.

In his second year recovering from his ACL injury, I believe we will see the Saquon Barkley of old. The Giants need to determine if it’s time to move on from him and completely rebuild, or if he’s still the back that’s finished second and 10th in fantasy RB production in his first two years. I have him ranked as my RB10 this year, and I’m probably very alone in that, which means I’ll get to let him fall to me in drafts. Brieda, Brightwell, and Williams are all fighting for RB2.

I loved watching Wan’Dale Robinson in college, but after watching Toney get under-utilized last year, it’s hard for me to get excited about a weapon like Robinson getting the touches he should. I won’t be drafting him, but if I’m wrong and he gets touches, he could be a Deebo Samuel type of producer (quick passes and running touches). I’ve mentioned my issue with Toney, but as for Golladay and Shepard, it’s just hard for me to trust Jones to get them the ball. The only fantasy asset to be trusted on this team for me is Saquon Barkley.

Yuck. Look elsewhere for your Tight End assets in fantasy. These are waiver wire targets.