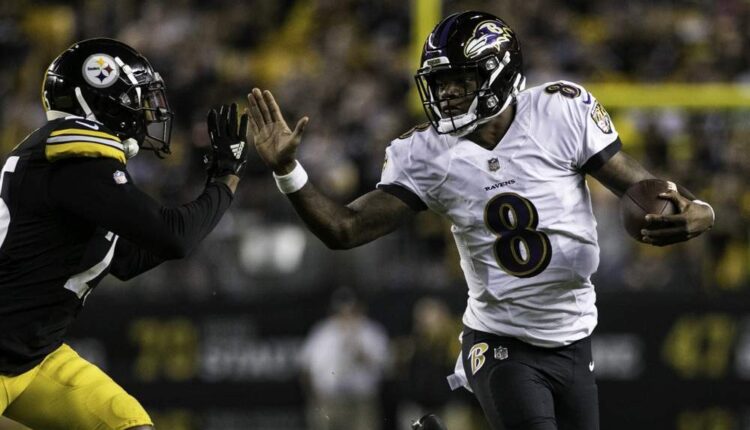 When it comes to this year’s draft, the first two selections were public knowledge. The rest were a complete mystery. Sure, there was an idea of who would go in the top 10, but nobody could have predicted the meteoric rise and fall of some of these prospects. One thing that stands out is how the Baltimore Ravens were able to cash in on terrific value picks. Some say that the birds stole the draft with selections like Center Tyler Linderbaum, LB David Ojabo, and DI Travis Jones. Cincinnati clearly only had eyes for the defensive side of the ball. Only 1 of the 6 Bengal selections was an offensive player. Neither the Pittsburgh Steelers nor Cleveland Browns sat on their hands; both teams made serious strides in providing their offenses with some playmaking talent. The post-draft outlook of each AFC North team from a fantasy prospective is provided here.

The message is crystal clear. The Ravens are 100% dedicated to the run. On day 1 of the NFL draft, the Ravens shocked the world (including Lamar Jackson) by sending Marquise “Hollywood” Brown to the Arizona Cardinals. Instead of replacing Brown with another WR, the team wisely continued to build around Lamar’s strengths and instead replaced Brown with pass-catching TE, Isaiah Likely. Hollywood got out of Baltimore to have the chance to play in an air raid system. The selections of future pro-bowler Tyler Linderbaum, mauler Daniel Faalele, and blocking TE Charlie Kolar provide all the proof you need that this team will never be that.

The latest news states that RBs Gus Edwards and JK Dobbins are both at risk of starting training camp on the PUP list. With Latavius Murray and Devonta Freeman no longer on the roster, the door is wide open for Tyler Badie to make an early impression. Badie ran for 1,604 yards and 14 TDs, and also caught 54 passes in his final season at Missouri. His pass-catching ability makes him an intriguing fantasy prospect, especially in PPR formats.

With the aforementioned departure of Hollywood Brown, it looks like sophomore wide receiver Rashod Bateman will be the only relevant target behind TE, Mark Andrews. Unfortunately for Bateman, Jackson has not yet proven himself capable of consistently feeding his WRs. With Lamar under center, Bateman’s highest output was a 6-catch, 80-yard day against Miami. So until further notice, the only Baltimore players you want in fantasy are Jackson, Andrews, Justin Tucker, and whoever is toting the rock out of the backfield.

Nothing to write home about here. This offense is going to look pretty much the same. The only offensive player taken by Cincinnati was OT Cordell Volson out of North Dakota State. Volson will no doubt move to guard in the NFL. There’s no guarantee that he’ll start this season either. Even if he doesn’t start, he’ll still provide depth and much-needed competition for the RG spot.

If it ain’t broke, don’t fix it. The offensive line was the only weak spot on this offense and the team addressed that this offseason. The additions of Karras, Cappa, and Collins should be more than enough to keep Burrow upright in the pocket. This draft has done nothing to change who the Bengals are on offensive. This team wants to marry the pass game with the run. Speaking of the run game, RB Joe Mixon’s role on this offense is safer than a 2022 Volvo. The only addition at the RB position was UDFA Shermari Jones out of Coastal Carolina.

Ja’Marr Chase is locked in as the #1 WR option for this squad, while Tee Higgins is a close second. Since Chase and Higgins came to town, slot WR Tyler Boyd has not had the same production. His receptions and yardage dropped each year that a new WR was added. Now it appears that the middle of the field is no longer his alone. The Bengals went and added former Raven and 1st round pick Hayden Hurst. Unlike CJ Uzomah, Hayden Hurst is a legitimate pass-catching threat. Therefore, the seam routes and underneath targets that once supplemented Boyd will now be shared with Hurst. Fantasy-wise, this offense is an all-you-can-eat buffet. You can safely roster Chase, Burrow, Higgins, Hurst, and Boyd. In that order.

Pre-draft David Bell wasn’t getting as much love as some of the “bigger” names. However, his post-draft outlook is looking very positive, thanks to his landing spot.  In his senior season, Bell caught 93 balls for 1286 yards and 6 touchdowns. His route running is slept on; this kid can create separation in the blink of an eye. Bell projects as a slot receiver, with Amari Cooper and Donovan Peoples-Jones working the outside. There is still room to add a veteran wide receiver to this room. With Cooper often banged up, this would be a wise move.

At first glance it was surprising to see the Browns take RB, Jerome Ford in the 5th round. This backfield already contains Nick Chubb, Kareem Hunt, and D’Ernest Johnson. In hindsight, the move makes sense because Kareem Hunt is playing in the final year of his contract. It never hurts to add running back depth, especially after Nick Chubb missed 3 games last season. It is unlikely that Ford makes an impact this season, but he’s one to keep an eye on in dynasty formats.

This Browns team has looked great on paper for the last couple of seasons. This year somehow feels different with Deshaun Watson at the helm. He is the kind of player that can elevate the guys around him. He had us rostering Kenny Stills and Keke Coutee in dynasty leagues for Pete’s sake. Watson’s elite play will shine a light on everyone’s true ceiling. Cooper is the clear-cut #1 WR and this backfield still belongs to Nick Chubb with Hunt mixing in. Between DPJ, Bell, and sophomore WR Anthony Schwartz, there is no telling who will become Watson’s number 2 option. The smart money would be on DPJ since he already has two years in the system.

Kenny Pickett hears his name called as he's drafted by the Steelers. pic.twitter.com/psEJQmGUPN

Widely viewed as the most NFL-ready quarterback, Kenny Pickett was selected 20th overall by Pittsburgh. We saw the 49ers move up in the 2021 draft and select Trey Lance to barely play him at all. Pickett’s situation is different because Jimmy G is a much better quarterback than Mitchell Trubisky. A wise man once said, “A team with two quarterbacks has no quarterbacks.” Until this QB competition is officially settled, this offense won’t be able to settle in and gain its new identity.

As nice as it is to get production out of Ray-Ray McCloud, the Pittsburgh Steelers don’t want to have to rely on getting production out of Ray-Ray McCloud. Insert George Pickens. The Georgia wideout provides an immediate top-level target for whoever is ultimately under center. It was a surprise to see Pickens fall as far as he did. While Pickens should immediately enter the starting lineup alongside Chase Claypool and Diontae Johnson, Calvin Austin will be battling for a role early on. Seeing as he possesses 4.32 speed, Austin will likely be used in 10 personnel (4 WR sets) and as a returner.

Running back Najee Harris suffered through poor offensive line play and still managed 1,200 rushing yards. Now he may have a new hurdle to overcome alongside a rookie QB. If Pickett doesn’t show early on that he’s a threat with his arm, Harris will be seeing a boatload of stacked boxes. Depending on how much freedom they had in college, it also takes some time for rookie QBs to check into the right play at the line of scrimmage. There could be growing pains to start, but all in all the Steelers are on the right path to resetting their offense.