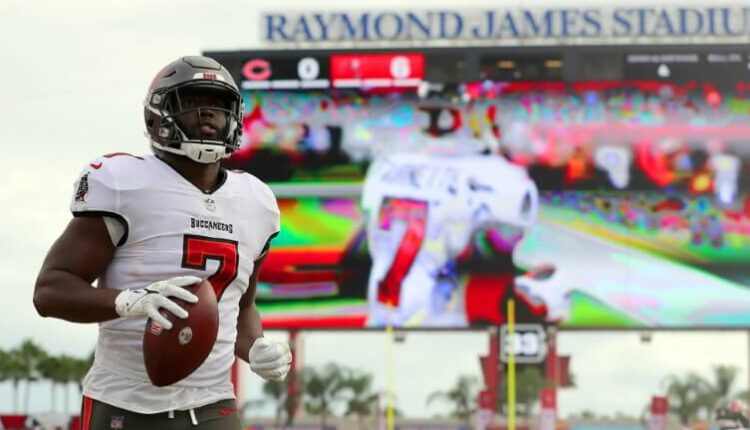 As much as we pore over stats and tendencies, fantasy football has a certain amount of randomness attached to it. Are you the type of fantasy manager who embraces the chaos? If so, you may find yourself playing in a TD-only league. TD-only leagues reward – you guessed it – touchdowns. The rub is that it only rewards touchdowns. Yards do not matter. Nor do receptions, touches, targets, first downs, or anything else. It is a touchdown or bust in these leagues.

Remember Week 16 last year when Jonathan Taylor ran for 108 yards in a hard-fought victory in Arizona? Well, if you were playing in a TD-only league, Taylor would have earned you zero points in that game. Among those who did score in that contest were Dezmon Patton and Antoine Wesley. So how the heck are we supposed to value players in a TD-only league? Well, much like everything else in fantasy football, it’s all about probabilities. Nobody would tell you in a million years to start Patton or Wesley over Taylor regardless of format. However, some players seem to have a nose for the end zone. Here are some players who I believe should get a bit of a bump in TD-only formats.

This is a lot closer to how the quarterback pecking order should go in a TD-only league as opposed to a typical league. Most TD-only leagues reward four points for a passing touchdown and six points for a rushing score. In this system, Brady, Stafford, and Rodgers all scored over 160 points last season. Jalen Hurts and Kyler Murray scored less than 130, while Lamar Jackson scored less than 80. Yes, Jackson only played 12 games last year. But his 6.33 points per game average ranked below Carson Wentz, among others. If anything, it looks like the gap between Josh Allen and the rest of the quarterbacks only widens in a TD-only league. Allen led the league in pass attempts inside the 20 while still rushing for six scores. He has 31 career rushing touchdowns in 61 games.

Outside of the normal QB1 range, Kirk Cousins is an interesting player in this format. He has only attempted 184 red zone passes over the past three seasons, but has converted 63 into touchdowns. New head coach Kevin O’Connell is implementing a new offense that figures to be more aggressive in throwing the football. Even if Cousins experiences a slight dip in red-zone efficiency, it should be mitigated by more volume. Cousins has been a top-10 quarterback in TD-only leagues in each of the past two seasons, and I expect him to reach that threshold once again in 2022.

Here is a crazy stat from last season. Jonathan Taylor had 85 carries inside the red zone. No other back had more than 46. The health issues of Christian McCaffrey and Derrick Henry contributed to that discrepancy a bit. Still, Taylor is an elite fantasy pick in all formats, including TD-only leagues. He found the end zone in 11 straight games last season en route to a 20-TD campaign. Taylor has scored 32 times in 32 career games. Henry has scored 57 touchdowns in his last 55 regular season contests, and McCaffrey has 27 scores in his last 26 games. Of the three, Henry would get the biggest boost, since his ADP is generally lower. Alvin Kamara is another player who benefits in TD-only leagues. The Saints back has 30 touchdowns in his last 28 games. He should be a first-round pick in this format.

Leonard Fournette is a late second-round pick in most formats, but I think he could be a first-round selection in TD-only leagues. He had 40 red zone carries last year, which was tied for ninth-most in the NFL. Fournette was also targeted 15 times in scoring territory. That ranked second behind Austin Ekeler among running backs. He scored 10 times in just 14 games last year, and I expect a similar return this season. Given Tampa Bay’s revamped receiving corps, Fournette could once again be a safety valve for Tom Brady near the goal line. I would not be surprised if he approaches 15 touchdowns given a full slate of action this year.

Going back to last year’s red zone leaderboard, some interesting names pop up after Taylor in the carry department. Among them are Damien Harris (44, fifth-most) and Antonio Gibson (43, tied for sixth-most). Harris probably gets a bigger bump in this format than any other player. As most leagues have transitioned to a PPR format, Harris is often an afterthought due to his 23 career receptions over parts of three seasons. However, his 15 rushing scores are a big deal in TD-only leagues. Keep in mind we are dealing with the Patriots here, and Harris’ name has been involved in trade rumors. But if he remains in Foxboro, he could flirt with RB1 value. If New England does in fact trade Harris, Rhamondre Stevenson would be in line to do the same.

Gibson’s role and usage have been debated more on Twitter in recent weeks than arguably any other player. Fantasy managers will have to keep tabs on this situation given his red zone usage last year. If Gibson is indeed in Ron Rivera’s doghouse, it could be a huge boost for Brian Robinson. The third-round rookie out of Alabama converted a short touchdown in his first preseason game last week. He looks to be the favorite to handle short-yardage and goal-line work. That may be the case even if Gibson is the de facto starter, making him an interesting pick. Robinson has a very high ceiling and should be a priority pick in the middle rounds given the latest rumblings regarding Gibson.

Fantasy managers widely consider Mike Evans a top-10 fantasy wideout in most leagues. In TD-only leagues, I would put him near the very top of the rankings. He has pulled down 27 touchdown grabs over the last two seasons, finishing inside the top-four in both 2020 and 2021. Interestingly, Evans was third among Bucs’ pass catchers in red zone targets a season ago. However, Tom Brady trusts no one more than Evans when Tampa Bay is on the doorstep. Evans was targeted 12 times inside the opponents’ 10-yard line last year. That was tied for fifth-most among NFL pass catchers. In 2020, his 14 targets inside the 10 were the second-most in the league. I think Evans is easily a top-five fantasy wide receiver in TD-only leagues based on how the Bucs deploy him near the goal line.

Gabriel Davis has been one of the most polarizing names among fantasy analysts and managers this offseason. Any chance of Davis slipping under the radar went by the wayside with his 201-yard, four-touchdown performance in Buffalo’s playoff loss to the Kansas City Chiefs. That upside is exactly why you should want to secure Davis in TD-only leagues. Davis was targeted 17 times in the red zone last year, tied for 14th-most among wide receivers. His role continues to grow in Buffalo’s offense, and with good reason based on his breakout playoff game. Many have debated whether Davis can put up a WR2 season in fantasy football in 2022. I think it is extremely likely he will do so in TD-only leagues. He could very well score double-digit touchdowns this year in a potent Bills offense.

I mentioned earlier how Kirk Cousins is a viable top-10 quarterback in TD-only leagues due to his efficiency. Well, the primary beneficiary of that efficiency has been Adam Thielen. Among wide receivers with at least 10 red zone targets, Thielen’s 84.6 percent catch rate was second-best. And he was even better on targets inside the 10-yard line. He caught all eight of his targets inside the 10, scoring six times. No other wideout with more than three targets inside the 10 was able to secure all his targets. His six touchdowns on said targets trailed only Cooper Kupp, Mike Evans, and Davante Adams at the position. In 2020 he was just as good. Thielen secured 16-of-19 red zone targets and scored 13 touchdowns. You can debate whether Thielen is still a must-start in traditional fantasy football leagues. But in TD-only leagues, he fits the bill.

Marvin Jones and A.J. Green are going well outside the top-60 wide receivers in virtually all fantasy football formats. However, they should also see a boost in TD-only leagues. Though a bit long in the tooth in football terms, it is that veteran savvy that quarterbacks trust and rely on inside the red zone. They also have an ability (though perhaps less so than in their prime) to win 50-50 balls in the end zone. Both were targeted 11 times inside their opponent’s 10-yard line a season ago. Only seven receivers had more such targets last year. Green has seemingly been allergic to the end zone in recent years. He has scored just five times in his last 32 games. But he could see some early-season goal-line work with DeAndre Hopkins out for the first six games of the season.

Tight end is a fascinating position in TD-only leagues. As in all formats, Travis Kelce and Mark Andrews are likely the first two tight ends off the board. After that though, who knows? Kyle Pitts is the consensus TE3, but he was wildly inefficient in his rookie season. He scored just one time on 14 red zone targets. No other pass catcher scored so infrequently on as many red zone targets. And while the 14 red zone looks are promising, several middling (for fantasy purposes) tight ends had more. Included in this list are Cameron Brate and Pat Freiermuth (20), Tyler Higbee and Dawson Knox (18), Hunter Henry (17), and Tyler Conklin (16). All those players had at least three scores, with Henry’s eight leading the way. I expect Pitts to score more than once this year. But I don’t think he is the no-brainer TE3 overall.

Henry and Knox had nine total touchdowns last year, which tied Kelce and Andrews for the most among tight ends. You would never in a million years see them drafted before Pitts, George Kittle, or Darren Waller. And I’m not saying you need to do so in a TD-only league. But I would at least consider it. Both have proven (as have the other tight ends previously mentioned) that they can be trusted in the red zone. That alone should illustrate the jump these players get in this format.

Brate to me is one of the more interesting players regardless of position who may get a boost in TD-only leagues. Rob Gronkowski was second on Tampa Bay last season with six receiving touchdowns. He has since retired, leaving Brate as