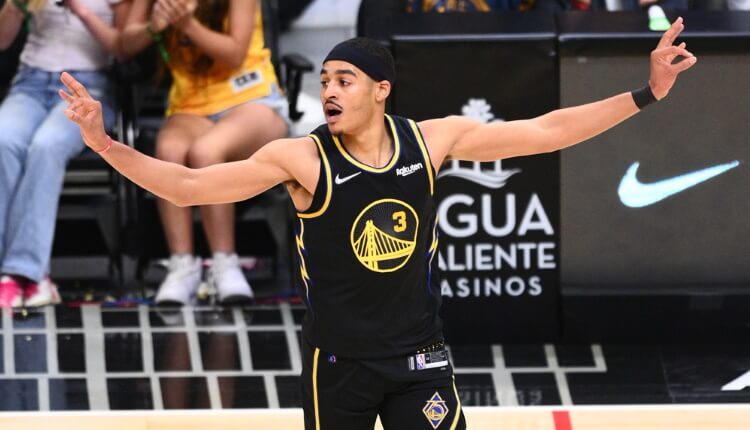 Though, for every fantasy season there is an off-season that might be just as fun. As I watch round one of the NBA playoffs, I can’t help but start the hype train for next year.

Before the draft stock bonanza starts this summer with Free Agency and Instagram workouts, I hope to baseline players based on their postseason and postseason fantasy momentum. I am introducing New News and Old News: These are players that warrant draft priority, and some players I am moving down the draft board, or even completely off.  The list is not exhaustive but should be growing as the playoffs continue.

A note on draft strategy: Target players that produce + 2 rounds of value (for example, selecting a player with pick 100, and the player produces at 75). However, in the early rounds, getting players that hold their value is also valuable. The fifth round and later is typically when you can find players that yield 2 rounds of value. Remember, nearly all players can produce value if they are selected appropriately, but there are certain players that are just better left off your team.

Let’s look at some early trends:

Dejounte Murray took a massive jump after soaking up all the usage in San Antonio.  A top 10 player this year, Murray nearly averaged a triple double with 21 points, 8 rebounds, and 9 assists with elite steals. Murray is a first-round pick, and a steal in the second round.

Haliburton finished the season as the 22nd-ranked fantasy player, good for second-round value. His 8.2 assists and 1.7 steals for the year make him elite in two categories, with strong production across other categories as well.  With the keys to the Pacers’ offense, Haliburton is a top 20 play for 2022-2023 season.

The new magician behind Cleveland’s offense, Garland is the engine of a surprise Cleveland Cavaliers team. In 70 games, Garland averaged 21.8 points, 2.5 threes, 3.3 rebounds, and 8.5 assists on 46% shooting. Fantasy Managers were excited about a potential breakout this year and a breakout they got. Next year Garland will be on everyone’s radar and could be drafted in the 3rd or 4th rounds due to his great scoring, assists numbers, and dual eligibility at PG and SG.

The new Rudy Gobert, perhaps? Robert Williams was drafted relatively high and failed to live up to the billing the first half of the year. That changed quickly once Boston Celtics committed to starting Time Lord at  center for big minutes. Robert Williams isn’t for everyone, but a team with the right build can really benefit from drafting an elite player in two categories: blocks and field goal percentage. The last 3 months of the season, Williams was top 20 in 9 category leagues. He will be overvalued for many team builds, but worth the investment for a select few.

Miles Bridges exploded out of the gate to start the season and became a major story league wide, cementing himself as a top fantasy contributor. With a jump in usage, Bridges became a routine 20-point, 7 rebound player with complements of 2 threes, nearly 1 steal, and .8 blocks per game. Bridges’ line reminds me of Tobias Harris, with much more athletic upside.  Expect Bridges to be durable and contribute top 35-50 numbers next year.

Desmond Bane was the NBA’s Most Improved Player, at least according to Ja Morant. I would have to agree, with leaps in production and showing out during first round of the playoffs. Bane played 80 games, averaging 18.5 points, 3 threes, 4.4 rebounds, 2.7 assists, 1.2 steals, on 46% shooting. For next season, it is reasonable to expect Bane to reach 20 points, while maintaining his other numbers. Consistent, upside, and durability makes Bane a great investment for next year. With a big playoff run Bane’s stock could continue to rise to overvalued.

Jordan Poole Splash Brother. Poole is a great example of what the playoffs can do for your fantasy stock. While having a productive regular season, Poole has put the league on notice with his play against Denver. Clearly a gifted scorer, be wary of chasing the pre-season hype. However, I am not hesitating to add him to my team in the 6th and 7th round.

Tyrese Maxey was an afterthought during the Ben Simmons saga earlier in the season. While Simmons sat, Maxey established himself as a starting guard for a contending team. With Harden now in the fold, Maxey has demonstrated he can play off ball as a scorer, complementing both Harden and Embiid. Expect Maxey to continue to be the glue for the 76ers and come in next year more confident in his role as the 76ers third option.  In the last two months of the season, Maxey averaged 19 points, 2 threes, 4 assists, on 51% field goal percentage.

Jalen Brunson is on the doorstep of a major breakout campaign. The league is officially on notice. However, will Brunson be on the Dallas Mavericks or another team as their starting guard? At 17 points, 4 rebounds, and 5 assists Brunson has been a stable presence for the Mavericks. Without Luka in the playoffs, Brunson has teased his potential upside as a scorer with an efficient 28 points per game. Expect Brunson’s stock to be volatile once free agency begins. If Brunson finds his way to a team like the Knicks, his stock will fly.

The bottom dropped out on Richuan Holmes once Domantas Sabonis was traded to Sacramento. Holmes’ role evaporated and his production went from top 50 in 2020-2021 to 130+ this season. In the last 3 months of the season, Holmes averaged 6 points, 4.5 rebounds on 50 percent shooting. Right now, he is an afterthought on the Sacramento Kings, but remains a valuable trade chip. Watch for Holmes to find a better team fit this offseason or during next season, making him an intriguing end of the draft selection.

When does one give up on hype? Isaac has not played since 2019-2020 season, where he demonstrated his upside with 12 points, 7 rebounds, 1.6 assists, and 2.3 blocks. Fantasy managers have soured on Isaac but expect news to heat up this summer when Isaac is healthier. Orlando needs defense, no doubt, but don’t build your team around Isaac.

Fantasy Managers bit hard on the upside of Michael Porter Jr. only to be stung by the dreaded back injury that kept him most of the year. He did play a few games, and it was not pretty. In 9 games, Porter Jr. averaged 10 points, 6 rebounds, 1 steal on 36% shooting from the field. The big fear is his lingering back injury, but there is optimism that he is already nearly full health.  Drafting Porter Jr. before the 6th round will be a risky play, but after is a worthy gamble that could pay off big.

A draft darling at the beginning of the season, Stewart was primed for a breakout year. Turns out, he did not break out at all. Stewart had a disappointing season despite having the center position locked down in 25+ minutes a night. Stewart finished with 8 points, 8.5 rebounds, and 1 block per game on 50% shooting. It seems that Stewart is still figuring out his game, but I believe he is a great draft target towards the end of your draft, with some upside at the center position at a much better price.

Clint Capela took a big step back in production this year. Normally a top 40 player, Capela was hovering around top 70 all year. With averages of 11 points, 12 rebounds, 1.2 blocks, on 61% shooting, Capela was still quite useful, but not enough to compete with the Gobert’s and Robert Williams of the world as his ADP would suggest. With a large step back in points and rebounds and an atrocious free throw percentage, Capela is no longer the 4th round building block he once was. However, Capela is durable and can be valuable in a Punt FT build.

Jusuf Nurkic Is clearly a large talented man. As a center, he is unique in that he can give you “big-man” stats (FG%, Rebounds, Blocks), mixed with assists and steals. However, Nurkic has demonstrated he can’t quite shake the injury bug. Coming off a horrific leg injury for anyone, let alone someone of his size, we might not see a 70+ game season from Nurkic again. Don’t fear selecting Nurkic, just select him for what he currently is, a top 100 player that can go on amazing runs.

Fantrax was one of the fastest-growing fantasy sites over the last few years, and we’re not stopping now. We are the most customizable, easy-to-use, and feature-rich platform in the industry, offering the greatest fantasy experience for your dynasty, keeper, redraft, and best ball leagues. Fantasy sports doesn’t sleep, and neither does Fantrax, with seasons running 365 days a year. Take your fantasy leagues to the next level now at Fantrax.com!
old news new news
Share