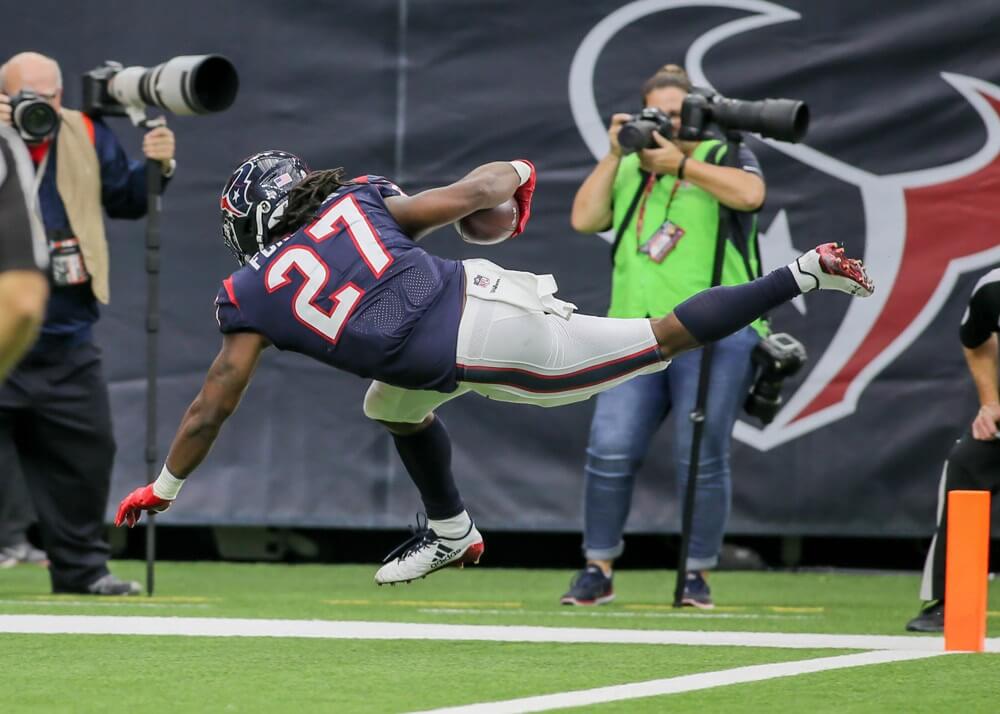 The NFL issued its schedule for offseason workouts this week. The draft is still a major milestone yet to be passed on the way to the more important activities, but here are some early AFC storylines to consider as we look ahead to OTAs and beyond to the preseason.

Baltimore: How much will Lamar Jackson progress as a passer? The receiving crew looks bare after Michael Crabtree and John Brown were not replaced. The Ravens may draft some receiving help but Willie Snead and Mark Andrews could be the premier pass-catchers, with the latter having some serious sleeper potential.

Buffalo: Robert Foster played well down the stretch last year, but the arrivals of John Brown and Cole Beasley could threaten his playing time. Foster already has an established rapport with Josh Allen, and he’ll have to keep that intact to remain fantasy worthy.

Cincinnati: New head coach Zac Taylor has everything he needs in place to succeed offensively. It’s time for this unit to stop underachieving. The key will be a healthy A.J. Green. Also, can John Ross step forward to be a more consistent big play threat? If so, this could be one of the best offenses in the conference. It will be interesting to see how Taylor pumps life into the offense and what it could mean in terms of fantasy potential for all of the key skill position players, especially the WRs.

Cleveland: Jarvis Landry has been a disappointment as a Brown so far. Will the arrival of college buddy Odell Beckham Jr. draw away significant defensive attention and boost his production again? Can Baker Mayfield rely on him even more on key passing downs? Landy could be a value as a drafted fantasy WR3 if the combo of him and Beckham gels quickly.

Denver: Who will step forward as the top receiving option for Joe Flacco or a top rookie QB? We have to watch closely, as Courtland Sutton was a disappointment as a rookie and DaeSean Hamilton exceeded expectations a bit. Whoever develops the early connection with the new starting QB may be the guy to draft from the WR crew.

Houston: If D’Onta Foreman truly looks good in the preseason, he could seriously push Lamar Miller for playing time this season if the Texans don’t draft a RB who can figure into the mix. The Texans have remained patient and high on Foreman internally, and did not seek another notable RB in free agency to bolster the position. They certainly had the cap money to do so. This could be the year of Foreman, so watch his progress and how he fares in the preseason.

Indianapolis: Nyheim Hines showed some flashes of the pass-catching specialist he could be in his rookie year, but we did not see any consistent results. With the addition of Devin Funchess and a healthy Jack Doyle, there will be a lot of competition for catches. This will be Hines’ second year in the offense and he is an ideal complement to Marlon Mack, but he could turn out to be a wasted PPR fantasy pick if he does not look to be a more frequent target for Andrew Luck.

Jacksonville: No one will know until camp and exhibition games are somewhat finished who will be Nick Foles’ preferred WR. Dede Westbrook, Marquise Lee, Keelan Cole and D.J. Chark are all in the mix, but making sense among them in early drafts will be a total crapshoot. Hopefully your league drafts close to the season so we can see reports from camp and some preseason play to determine favorites first.

Kansas City: Will Carlos Hyde regain respectable form? If Damien Williams shows he is not capable of being a featured back from the beginning of the season, Hyde could be pushed into a larger role. I think he is still capable of performing well with extended playing time. He should be one of the top handcuffs drafted in 2019.

Los Angeles Chargers: There are some big expectations for Mike Williams and Hunter Henry to deliver for this offense in 2019. Williams now has a starting role to himself and can use the preseason to show he can be more versatile in terms of running routes and making key catches. Henry just has to show he is healthy and ready to go for the new season and he can be drafted as a Top 5 TE.

Miami Dolphins: It will be very interesting to see how the RB workload gets divvied up between Kenyan Drake and Kalen Ballage. Drake is more versatile but Ballage should be the better inside runner. Drake may also have been misused as a non-featured back by Adam Gase. How well Ballage performs in the preseason could determine how much of an even split this becomes.

New England Patriots: How much of the offense will be centered around the RBs? The team is obviously devoid of impact receiving talent outside of Julian Edelman. But the Patriots may not be finished yet in terms of offseason moves. Keep watching to see if they surprise us with some sort of deal for another receiver.

New York Jets: Everything is in place for Sam Darnold to at least play respectably on a regular basis. He now has a premier pass-catching back, a deep threat (Robby Anderson), a slot guy (Jamison Crowder) and a dependable possession WR (Quincy Enunwa). He also has a pretty good young TE (Chris Herndon). Dynasty owners want to see how much he can take advantage of his now solid surroundings.

Oakland Raiders: It’s now or never for Derek Carr with Antonio Brown and Tyrell Williams as his top two WRs. Plus, the running game still does not scare anyone. We will have to wait and see what Oakland does, if anything, at QB and RB during the draft. How the team enters camp personnel wise may show just how much confidence Jon Gruden truly has in him. If there is a threat to his job on the roster, even if it’s not one of the very top QBs selected, which it will likely not be, then Carr may be playing for his immediate future. Will he go to Las Vegas as a starter? If he does not have a reliable RB, he could also throw the ball a heck of a lot this year.

Pittsburgh Steelers: Is Donte Moncrief a fantasy gem about to be revealed? A big target with proven TD promise, Moncrief could exceed some fantasy expectations if he develops a good on-field relationship with Ben Roethlisberger. He has WR3 value right now with some promise for more.