Man, I’ve been trying to get my NL-Only Rankings and Auction Values up for a while now, but every time I had them set, injuries and signings made them look out of whack. There’s no putting them off now. I’ll go with what I have and we’ll all just have to adjust to any more news that comes out… I’m talking to you Corey Knebel. How’s your elbow feeling?

Getting Ready for your Draft or Auction

We’re gonna go position by position as we look at the rankings and auction values. I do not have them listed in an overall rankings format. You can use the dollar values to compare players among different positions. If you’re like me and want a piece of paper in hand to check names off, or you need to take it to an in-person draft, then here is a Printable NL-Only Cheat Sheet with Auction Values.

You might also want to print out my Position Eligibility Cheat Sheet as well. It shows the number of games played by position for every player who appeared in the Major Leagues in 2018. Of course, you can always use our online position eligibility tool as well. It works great on a laptop or cell phone and all you have to do is type a player name in and the games played data will pop right in.

Oh, one more thing. You’re going to nitpick my rankings and values. I understand. I do it. Hell, I’ve done it 15 times while writing this article. I get it. I would expect nothing less. Here’s what I’ll say about it though. If you’re in an NL-Only auction it means you are probably pretty advanced. You are your own expert… or at least you should be. Hopefully, I’ve helped you with a starting point and some solid tools, but in the end, you are the one who gets to brag or sulk at the end of the season. You be you.

Before we get to the specific auction values I want to remind you of one key aspect of fantasy baseball auctions. These values are pre-auction. Once players are purchased all the values begin to change with each over or under bid. I cover a lot of this in my auction strategy articles (Basic Auction Strategy and Deep League Auctions). Just realize that each auction takes on a life of its own and your strategy and auction values have to go with the flow.

You’ll also probably find out that my values on star players are too low to roster most of them. If we were talking mixed league auctions here, I’d say go the extra amount, but if you do that in an NL-Only auction you’re going to end up with holes. Holes hurt. I am a huge believer in Spread the Wealth for NL and AL-Only auction leagues. It’s fun to own Ronald Acuna and Trea Turner, but it’s more fun to win. A balanced and deep roster is how you win.

*You can click on any of the rankings tables below to see a full sized image.

I’ve had Realmuto at No. 1 all year, but I’ve flip-flopped on the next three all spring. If you like Willson Conteras better than Ramos or Grandal then adjust accordingly. My strategy this year is to grab one of those top 6 and then pair them with a useful partner like Cervelli or maybe Austin Barnes. Might perfect pairing might be Buster Posey who is a value for the first time and Francisco Mejia who offers more upside than any other catcher below him. What I try not to do is end up with a total zero at the position. I like Tony Wolters as much as the next guy, but he’s not helping me win my league any time soon.

First Base Rankings and Values

First base is really not that deep at all. I either want to grab one of those first seven or I’ll target Peter Alonso, whose value goes way up if you play in a keeper or dynasty league. I’m probably lower than Jesus Aguilar than most. Many would group him with those top seven. If you do, go ahead. It’s your league and you should be your own expert. Two sleepers I like here are Matt Adams and Ryan McMahon. If Ryan Zimmerman gets hurt, I could easily see Adams hitting 30 bombs. McMahon’s value is all tied to playing time. If he gets that second base job, then it’s hard to fail in Coors Field… Or the Rockies could give him no chance like they did in 2018. Maybe they’ll announce their plans before your auction starts.

Second Base Rankings and Values

Second base is deeper than many think. I love Daniel Murphy for 2019. He may be the perfect player for Coors Field. His power is enough to approach 20-to-25 home runs, and his line drive stroke will run wild in Coors Field. I’ve heard no whispers about his knee acting up either. In deep leagues, you can’t fill every position with a star. Sometimes you have to settle for a useful role player. Luis Urias is that player at second base. He should hit for a good average and might give you double-digits in steals and homers. I also like McNeil if he can get enough at-bats.

Third Base Rankings and Values

For some reason, I’ve been getting locked out of third base in my early drafts. Arenado is the obvious top pick, but I just haven’t pulled the trigger on the players in a big second tier. Wil Myers comes with a bit of injury risk, but he’s got the proven potential to hit 30 home runs and steal 20 bases. You aren’t finding that at third base unless you head over to Jose Ramirez and your AL-Only league. I’ve also been lured in by Josh Donaldson and his upside. He may be done as a star player, but in an NL-Only league if he even comes close to his previous production he’s a league changer. If I do miss out on the top options Ian Happ offers power upside, though I’m not sure he’ll ever hit over .265 or so.

Shortstop may be the deepest position in baseball this year and much of it is available in NL-Only leagues. Trea Turner, Trevor Story, Manny Machado, and Javier Baez are all being drafted inside the top 20 players in mixed leagues. If there’s a bargain in that group it may be Story as some people don’t seem to trust his batting average or speed. I’m staying away from Baez. I’m a Cubs fan and I love to watch Baez play, but I think he’s much closer to a .250 hitter than a .290 hitter.

The value players I like at short are Chris Taylor who could give you 15 HRs and 15 SBs, and Paul DeJong who has 30-HR type power. Garrett Hampson also offers big-time speed upside if he gets the second-base job in Colorado. 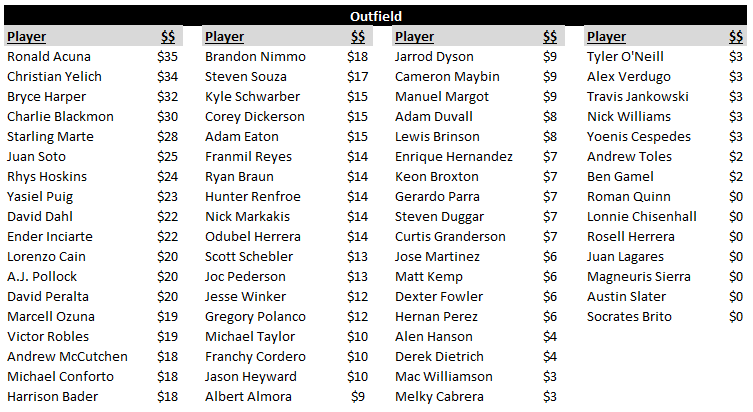 Everybody seems to think the outfield is deep, but if your league uses five of them it can thin out in a hurry. I think Acuna is in for a monster year with 35-plus HRs and 25-plus SBs. I might go up to $40 on him and I still probably won’t get him. I like David Dahl as a breakout. I would go over that $22 for him though. His injury history is long and varied. The news on Gregory Polanco has been good so far. If people are staying away because he’ll start the year on the IL then do not be afraid to pounce. Jose Martinez reportedly has no place to play in St. Louis. My question is, why then did they just sign him to a new contract? I have to think he finds his way to 400-plus at-bats. At his current price, I love the upside his electric bat brings. Franmil Reyes is another favorite target of mine. The San Diego outfield is crowded, but big bats win out. His value may be muted early on, but I like his chances of hitting 25-plus big flies. I LOVE him in keeper formats. That Padres lineup is only going to get better. 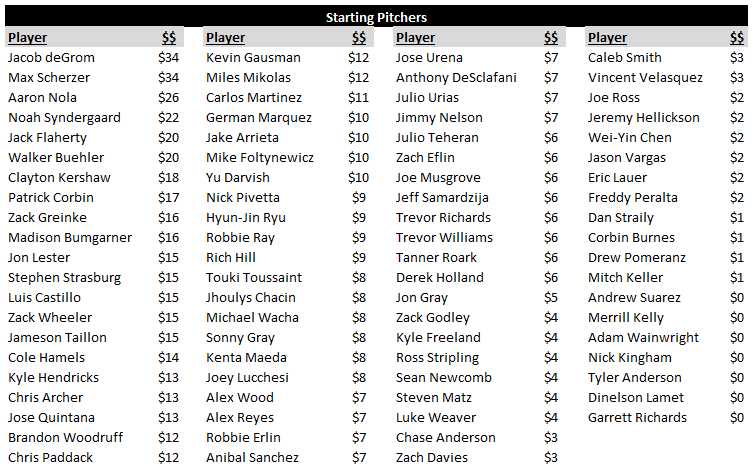 I’ll be honest, it’s harder than it used to be to find pitching value in fantasy baseball. I share my thoughts more in this pitching strategy article, but I value the elite starting pitchers more than I ever have. If pushed I’d consider going up to $40 on deGrom or Scherzer. I still might not get them. If I don’t I’m gambling that Noah Syndergaard can stay healthy and approach their value. I’ve paired Syndergaard with Jack Flaherty in a couple of leagues. I think Flaherty offers as much strikeout upside as any pitcher in baseball and I don’t think the Cardinals will limit his innings as much as the Dodgers will with Walker Buehler.

If you don’t get one of the elite arms, then grabbing two of Luis Castillo, Zack Wheeler, Jameson Taillon, and Chris Archer may help you bridge the gap. Two young pitchers I’m loving are Chris Paddack and Brand Woodruff. Paddack is probably the better long term bet, but I think Woodruff could pay off very nicely in 2019. The good news is you can probably get him cheaper than the $12 I have him listed at. I’m just that high on him.

ALERT! I still have Corey Knebel at $14 above. The news on his elbow just came out and I didn’t have time to update everything. There are two plans of action here. One, drop him down to the Jordan Hicks neighborhood and take a shot. Two, just avoid him and go with other potential values like Archie Bradley or Will Smith. In an ideal world, we’ll just be able to pencil in the name Craig Kimbrel there and kick in a few extra dollars.

A nice plan for NL leagues might be drafting pairs. Partner up David Robertson and Seranthony Domingez for an elite pairing that covers your butt nicely. Or maybe go a little cheaper and grab Jordan Hicks and Andrew Miller. I always suggest drafting a couple of middle relievers anyway, so getting several members of a committee is no big deal.

One thing I do not recommend though is punting saves (or any category for that matter). You at least need to stay with the pack in saves. Then during the season a trade or waiver wire claim could give you an easy four or five points.

Hopefully, my NL-Only Rankings and Auction Values got to you in time. I have my two biggest auctions next weekend, so I’m sure many others may as well. Use my values as a tool and add your own take on top of it and I think you’ll come out just fine.

You buying in on Doug’s NL-Only Rankings and Auction Values? For more great rankings, strategy, and analysis check out the 2019 FantraxHQ Fantasy Baseball Draft Kit. We’ll be adding more content from now right up until Opening Day!