Nick Castellanos: Will He Rebound in 2021? 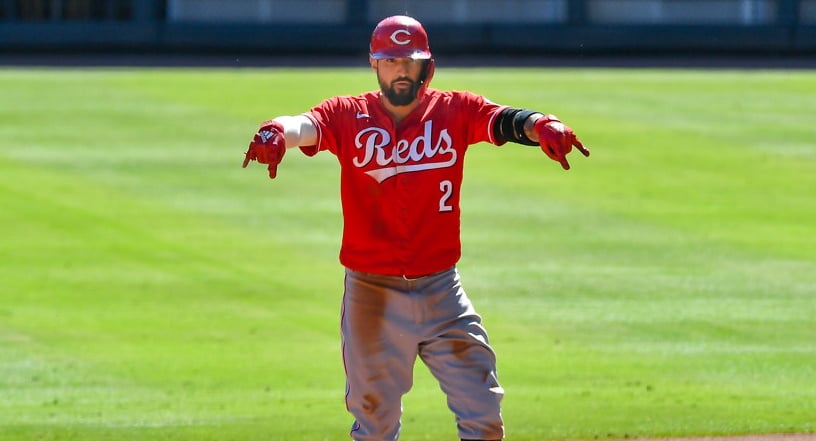 The hype surrounding Nick Castellanos was enormous when he signed with the Cincinnati Reds. The doubles machine would surely benefit from playing his games in Great American Ballpark. Many, including myself, pegged Castellanos as a darkhorse contender for National League MVP.

The season started exactly as everyone hoped for Nick Castellanos, as he began the season on a 12 game hitting streak. During that span, he slashed .366/.447/.878 with six home runs, ten runs scored, and 13 RBI. My darkhorse pick for MVP looked great! Unfortunately, after the 12 game hit streak ended on August 6, things went downhill. Over his final 48 games, Nick Castellanos slashed just .192/.262/.395 with eight home runs. Many Fantasy owners were left wondering what happened? Today we will dive into Nick Castellanos’ profile to see what went wrong and what we can expect from him in 2021.

Who Is The Real Nick Castellanos?

Nick Castellanos came into the 2020 season with high hopes from Fantasy Baseball owners and Reds fans. After a 2019 season where he led the league in doubles, he was sure to benefit from moving his home ballpark to Great American Ballpark. After all, when he was traded to the Chicago Cubs at the 2019 trade deadline, few players had a stronger August and September. During his 51 games in Chicago, Castellanos batted .321 with 16 home runs, 43 runs scored, and 36 RBI. 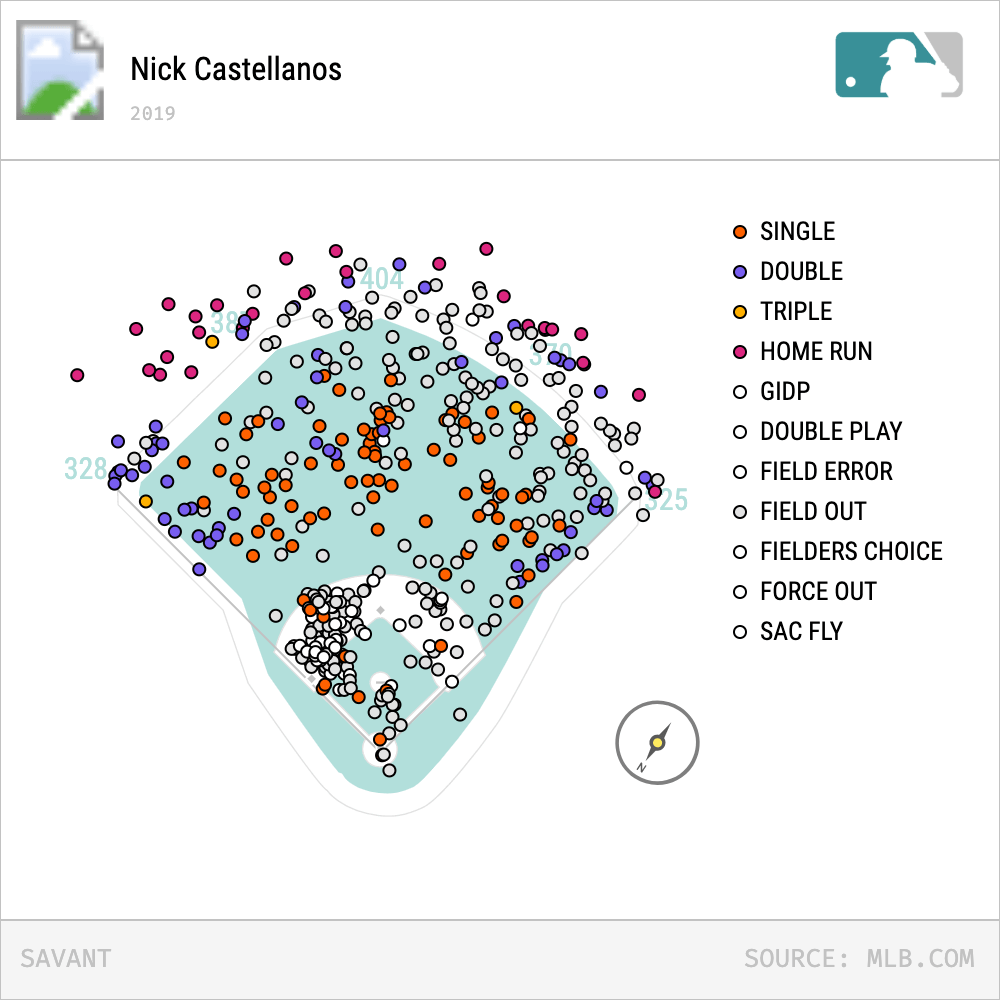 Upon signing with Cincinnati, I noticed his 2019 spray chart overlayed in Great American Ballpark. You can see that above. I was confident that Castellanos was going to have an amazing season with the Reds. After his scorching hot start previously mentioned, he finished with a line of .225/.298/.486 with 14 home runs, 37 runs, and 34 RBI.

Despite the disappointing season, Nick Castellanos will spend his next three seasons with the Reds and is still in the prime of his career at 28 years old. What happened, and what can we expect in 2021? Let’s dive in.

Power is no problem for Nick Castellanos. Upon leaving Comerica Park, a notorious pitchers park, Castellanos has slugged 30 home runs in just 111 games between the Cubs and the Reds.

In the small 2020 sample, Castellanos also saw a nice jump in both his average exit velocity and exit velocity on line drives and fly balls. His hard-hit rate also jumped five percent. 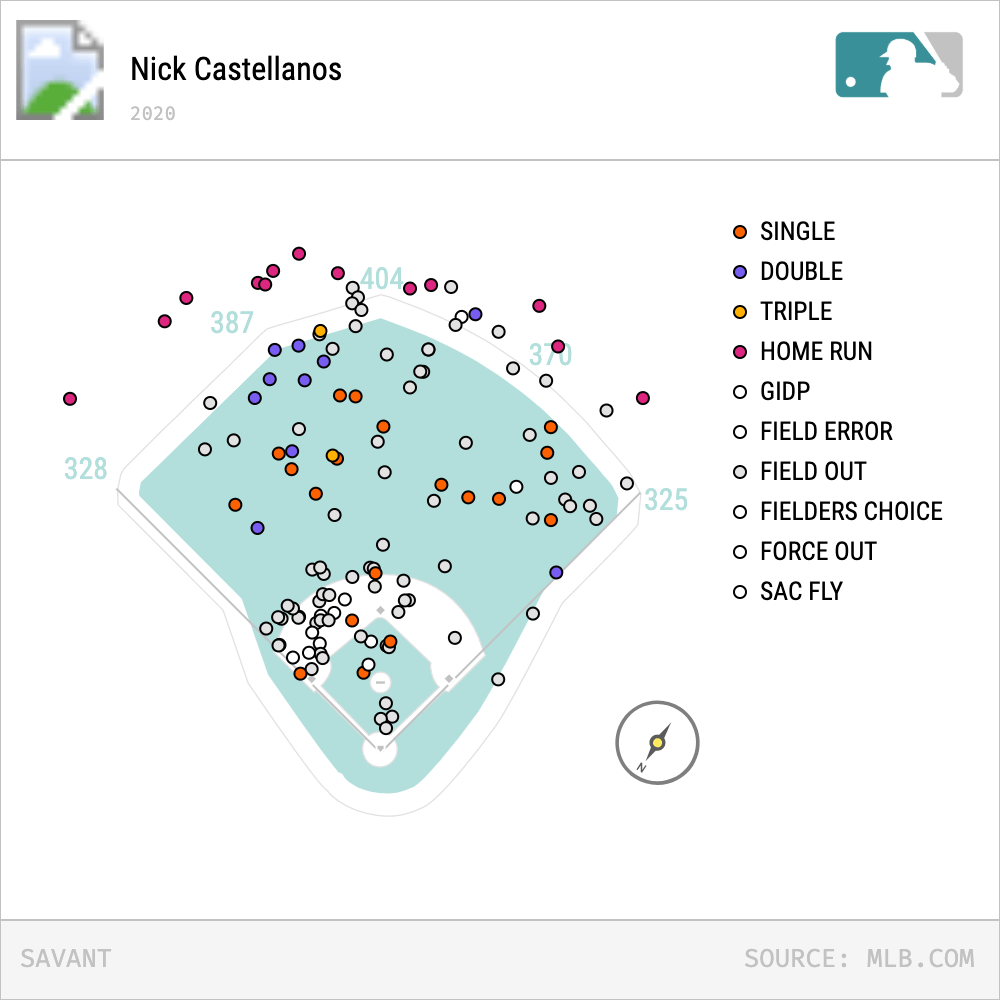 Over his last 162 games, Nick Castellanos has hit 36 home runs. Considering over two months of those games were spent in Comerica Park, it is quite impressive. It is also worth pointing out Castellanos’ spray chart from 2020 listed above. He had a lot of deep outs, that could have ended up as home runs in multiple stadiums. 32-35 home runs over a full season feels like a safe projection for Castellanos. But 40 home runs in 2021 would not surprise me.

In the small sample that was 2020, Nick Castellanos saw some notable changes in his batted ball profile. First is his increase in line drives. Usually, when a player increases their line drive rate, they see an increased BABIP. That was not the case for Castellanos, who saw his 2019 BABIP of .337 drop all the way to .257 in 2020. This is significant because Castellanos has a carer .329 BABIP, including the down 2020 season.

Another interesting factor is Castellanos decreased pull percentage. When a player hits the ball hard like Castellanos and pulls the ball, they hit more home runs. But Castellanos hit the ball up the middle 14 percent more than he did in 2019. The reality is, it seems that Nick Castellanos was extremely unlucky in 2020, and you should expect his BABIP and batting average to normalize in 2021.

Nick Castellanos seemed to become a more patient hitter in 2020. He swung at fewer pitches, both in and out of the zone. He also saw a jump in his swinging strike rate to an atrocious 16.6 percent. That mark was good for eighth-worst in baseball. This stemmed from making much less contact on pitches outside of the zone. His O-Contact percent dropped nearly ten percentage points from 2019 to 2020.

Castellanos’ overall contact rate also saw a healthy drop of seven percentage points. Was Castellanos selling out for power in 2020? It is highly possible. Even though Castellanos changed his approach in Cincinnati and appeared to be more sound in his approach and loading into his swing. So far, the poor batting average can be attested to both a low BABIP and an increased swinging strike rate.

Historically, Nick Castellanos has been a much better hitter against left-handed pitching, with a .301 batting average and just a 20 percent strikeout rate. He has a .265 batting average and a 26 percent strikeout rate for his career against right-handed pitching. He also averages a home run every 20 at-bats against lefties, while averaging a home run every 30 at-bats against righties.

In 2020, Castellanos was poor against both LHP and RHP but actually hit most of his home runs against righties. Another weird blip in Castellanos 2020 season. With a long track record like Castellanos has, I would expect a rebound toward his career norms in 2020. 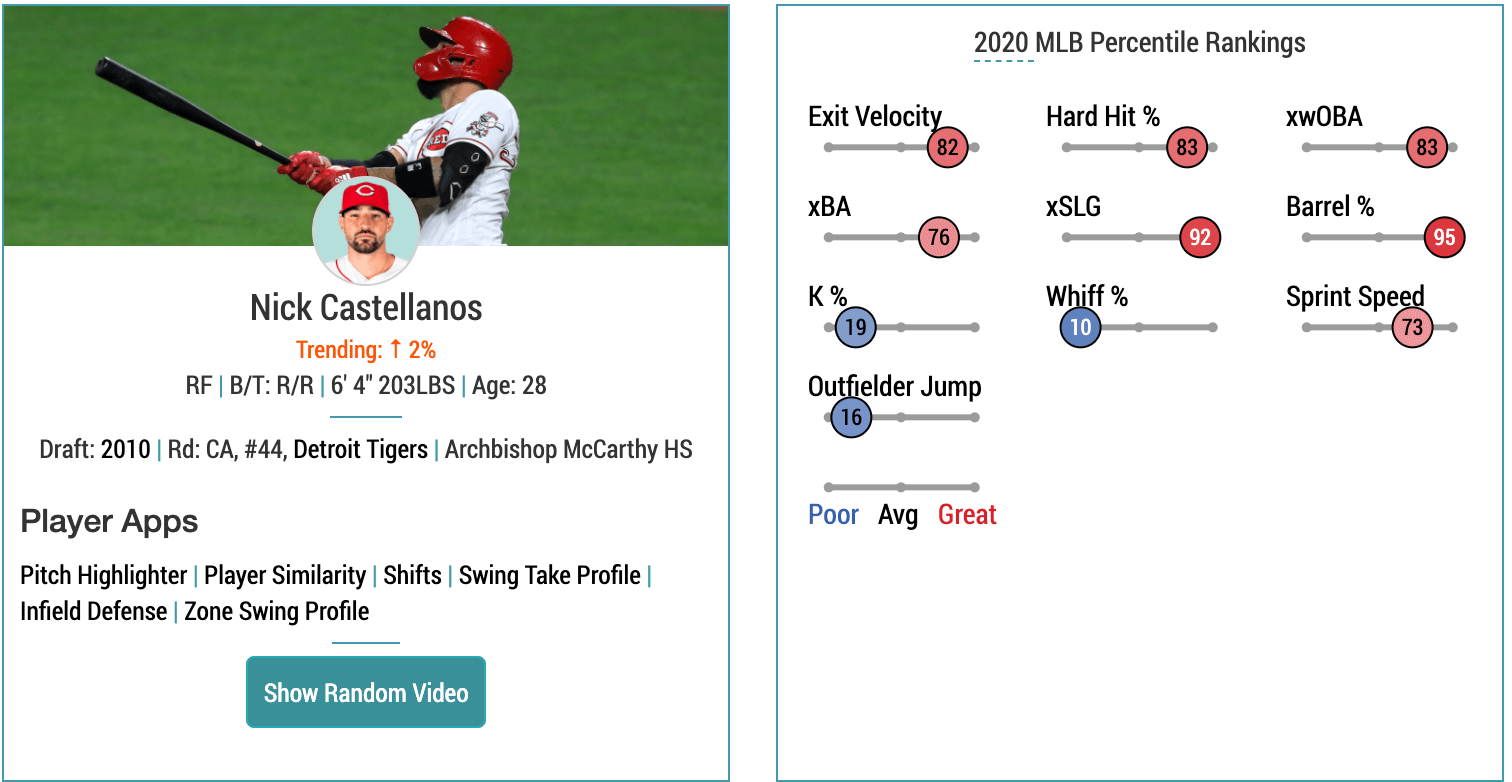 We have mentioned several of Nick Castellanos’ statcast numbers in previous sections as his power numbers were strongly supported by his hard-hit rate, barrel rate, and exit velocities. He rated extremely well in those categories, which suggests that Castellanos’ power is legitimate. His expected ratio stats also support that Castellanos was unlucky in 2020.

The underlying data, especially statcast, suggests that better days are ahead for Nick Castellanos. I would feel confident about a rebound in 2021.

Durability and injury concerns are a large part of projecting a player. Avoiding injuries during the Fantasy Baseball season can be a big factor on your team. Some injuries are hard to predict, but there is such thing as injury-prone players. Take Giancarlo Stanton, for instance. He has spent a total of 387 days on the Injured List in his ten-year career.

Fortunately, Nick Castellanos has limited his time spent on the Injured List. The only injury he had that caused him to time was a left-hand fracture on a flukey hit-by-pitch in 2016. He fractured his fifth metacarpal on his left hand, which caused him to miss 51 days. Outside of that injury, Castellanos has stayed very healthy, which is a good sign for Fantasy Baseball players looking to draft him. He played every game this season for the Reds and played at least 150 games each of the prior three seasons. There are minimal durability concerns with Castellanos.

Despite the down year in 2020, the future looks bright for Nick Castellanos. His underlying data suggests that his power is legitimate and that he underperformed his batting average. I would expect a strong rebound next season from Castellanos.

Early mock drafts have Castellanos’ ADP at 85.3. The price is actually slightly higher than his 2020 ADP, which is interesting considering Castellanos’ down season. Regardless, I feel comfortable paying a top 75 overall pick, given the potential return on investment. Castellanos should hit in the heart of a good Reds lineup and give him a chance to rack up counting stats. My projection for Castellanos in 2021 is a .283 batting average, with 33 home runs, 85 runs, and 90 RBI. If he hits those projections, he will return a positive value based on his draft price. Nick Castellanos is more than poised to have a nice rebound year in his second season with the Reds in 2021.

If you liked this deep dive, you should check out Justin Johnson’s piece on Marcell Ozuna and what you can expect from him in 2021.