Remember the NFC West in 2016? The Rams and 49ers were a laughing stock, the Cardinals were a high flying offense, and Seahawks’ fans believed Russell Wilson would pilot them to a championship. Jared Goff and Todd Gurley both got slapped with ‘Bust’ labels. Jeff Fisher’s ‘middle school‘ offense put Los Angeles’ new team at the bottom of the division. Meanwhile, Russell Wilson and The Legion of Boom had their sights set on the Super Bowl.

What a difference a year can make.

The Rams are the powerhouse with new acquisitions that will scare opposing coordinators on both sides of the football. Jimmy “Jimmy GQ” Garoppolo has brought hope to the Bay Area and, coupled with Kyle Shanahan’s  genius, look to expand on their success in 2017. On the other hand, fans of the Cardinals and Seahawks have to be worried. It’s hard to see how Wilson will fare in 2018 after the team jettisoned talent or how the combination of Sam Bradford’s health and the Cardinals’ bottom ranked offensive line will work.

Free agency gave us a glimpse into each team’s 2018 season. However, it’s hard to see the weaker teams entering the season as they currently stand. This next piece in the series looks to sort out each team and what moves could serve to benefit them and fantasy owners.

The Cardinals’ offensive scheme has typically featured speedy outside receivers, a strong running game, and Larry Fitzgerald. But as the talent decreases, the team’s outlook rapidly falls.

David Johnson’s 2017 injury compounds the team’s issues, but the receivers are still a major concern. While Fitzgerald has been the pillar of the receiver group, an outside presence is required to balance the offense. Michael Floyd (2014) and John Brown (2015) are examples how explosive this offense can be. Stylistically different receivers in how they win, the team’s success has been tied to how well they’ve performed and it emphasizes the team’s need for a strong outside presence.

Setting aside Bradford’s health concerns, let’s look at what Bradford’s had to work with in the past.

This looks less than ideal for Bradford. His reliance on receivers creating separation will be tested in Arizona. While his focus will be on building rapport with the current roster, the Cardinals should be evaluating the incoming receiver class to help. It’s assumed Arizona will address their offensive line, defense, or quarterback within the first couple rounds. But in addition, the team needs a receiver that can play across the middle of the field as Nelson’s speed pulls the safeties. That’s Michael Gallup.

Gallup’s quick hands and feet have made him an effective outside receiver. His route running has shown improvement and aggressiveness at the catch point would mesh with Bradford need for separation. Plus, his physicality and route technique would keep him on time with his quarterback. Each of Bradford’s previous receiving groups have thrived on short-intermediate timing routes where the receiver can win on their own. Gallup has shown the ability to do this and would make an excellent addition to the Cardinals.

The signs of a Todd Gurley resurgence were all there. The Rams added star left tackle Andrew Whitworth to the line in March. NFL Media’s Gregg Rosenthal wrote on Sean McVay moving Gurley around the formations in June. Finally, Lance Dunbar, their pass catching back, went down with a knee injury in August. So we have a top RB talent with a head coach looking to get him more touches and a backfield all to himself.

The recency bias from the 2016 season and Gurley’s historic run during the fantasy playoffs made him the value pick of every fantasy draft in 2017. But the Rams need to keep fine tuning their offense to make a deeper playoff run in 2018.

While fantasy owners love a 300+ touch running back, the Rams could use an added dimension to the run game. The Patriots showed that using multiple big backs with high marks in the passing game don’t tip off a defense and can create an offensive edge. Regression is an obvious concern with less touches, but another RB setting up scoring opportunities for Gurley would keep him in fantasy owner’s good graces.

Rashaad Penny posted a 4.46 40-yard dash at 220 lbs. Not primarily used in the passing game, but Penny’s shown he’s more than capable out of the backfield. In the open field, Penny has the agility to get around linebackers with subtle shiftiness that can extend plays. He’s more quick than fast limiting his home run ability. His route running also needs improvement that would reduce his snaps. Here’s where Todd Gurley wins. Penny’s not the second coming of Alvin Kamara, but his seemingly redundant abilities keeps the offense moving. This would keep Gurley in on scoring positions maintaining his value in 2018.

It was Week 16. Jaguars at 49ers. It was only Jimmy Garopollo’s fifth start, but he had already shown promise in Kyle Shanahan’s offense. Despite that, the game set up as an impossible task for the 49ers and a playoff preview for the rest of the AFC.

The 49ers’ season was over, but the franchise had their coach and they had their quarterback. The off-season came with expectations that the team would build around their newfound hope in Jimmy G. They did that. With the run game seemingly situated and functioning tight ends, the wide receiver group deserves some attention.

Pierre Garcon will be returning to the squad as a 32 year old veteran coming off a fractured neck. Garcon appeared to be losing a step as his average cushion (how far a defender plays off them pre-snap) increased by 22%. But his air yards market share and average yards of separation decreased by 40% and 10%, respectively. Shanahan’s offense prominently features play action pass concepts relying on timing the ability for the receivers to beat coverage as the QB leaves the pocket exposing himself to the defense. The 49ers would be wise to draft a prospect that could work with Garcon and integrate himself into the offense as the team moves forward.

Christian Kirk‘s game is built on techniques conducive to the San Francisco offense. During his time at Texas A&M, Kirk demonstrated his route running skills and ability to pinpoint holes in zone coverage. A majority of Kirk’s college career was spent improving on proper footwork opening up passing windows and developing a rhythm with the quarterback. He doesn’t have much long speed, but his 4.47 40-yard dash time suggests he has the quickness to win in the intermediate areas of the field.

Russell Wilson’s magic act is starting to become mundane. Not because it’s uninteresting to watch, but we know what’s going to happen. Wilson gets flushed out of the pocket as soon as he takes the snap, he rolls to his right, the edge rusher gets within an inch, and Russ spins back towards the middle of the field. Cue the circus music. He sees a receiver down the field. Pass complete! Every. Single. Time.

Seattle’s offense thrived on chaos in 2017. Speedy receivers on the outside. An elite slot receiver that could move all over the formation. Plus, a 6’7″ tight end that caused nightmarish matchups in goal line situations. 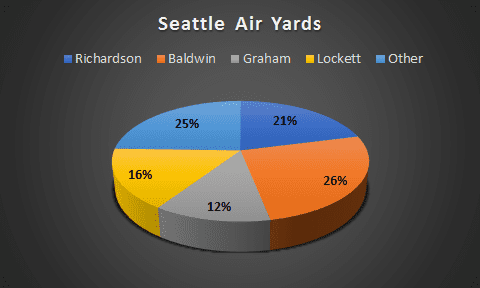 Jimmy Graham and Paul Richardson accumulated a third of the team’s air yards in 2017. Richardson’s speed and Graham’s size made them critical parts of the offense, but both departed during free agency. Jaron Brown looks to replace Richardson leaving the tight end position to be led by 31 year old Ed Dickson. Bold. The tight end position is a clear need for the offense that they should look to invest in during the draft.

The Seahawks have the 18th overall pick and then have to wait until 116 overall for their second selection. Their offensive line or defense (specifically CB or DE) will most likely be addressed with that pick. With most the top TE prospects going in the first and second round, the Seahawks could find value in Ian Thomas. Still raw, but his lack of nuance or expanded route tree could work for Russ when plays break down. He’d need to improve as a blocker to gain more snaps, but his athletic talent would be an upgrade over Dickson and help keep the Seahawks afloat in 2018.

Fantasy EPL: Round 32 Review / Round 33 Preview