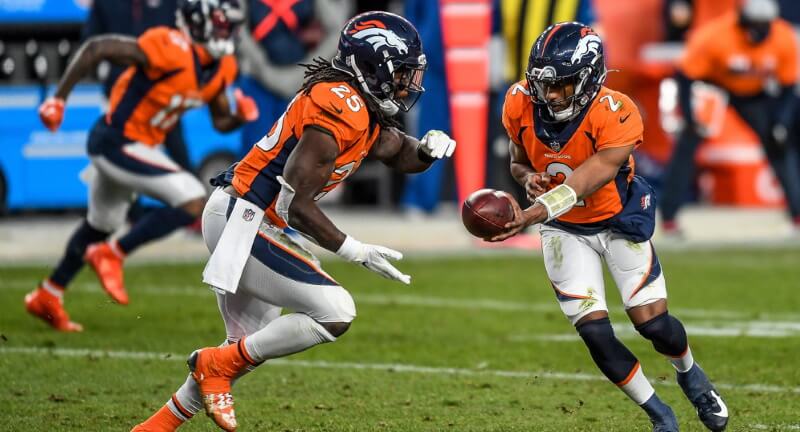 With the Buccaneers having claimed the title of Super Bowl champions, the 2020 NFL season has officially concluded. Savvy dynasty GMs should begin planning ahead, as the 2021 NFL league year will begin soon on March 17th.

When free agency opens up, teams re-signing players to new contracts or declining to do so will create a flurry of musical chairs with immediate impacts to players’ dynasty values. The salary cap has generally increased year over year, but with the COVID pandemic, it’s expected to decrease from 2020 to 2021 to around $181 million. And as always, unforeseen trades are sure to occur.

Here are a few dynasty buys at running back to target in trades right now based on their team’s pending free agents, but be aware that these are all calculated gambles at this point in the offseason, so keep the price point in mind. ADP data used is courtesy of Dynasty League Football as of January 2021.

Dynasty Buys at Running Back

The best time to buy A.J. Dillon was a couple of months ago, as most dynasty GMs are now acutely aware that both Aaron Jones and Jamaal Williams are scheduled to hit free agency this offseason. It’s possible that Green Bay could re-sign one or the other, but it’s incredibly unlikely that the Packers would retain both running backs, especially after Jones’s awful showing and subsequent injury in the NFC championship loss to Tampa Bay.

Still, some dynasty GMs out there are wary of Dillon and may be willing to part with him for the price of a late first-round rookie pick. At that price point, Dillon’s upside is well-worth his cost. In a best-case scenario, neither Jones nor Williams would remain with the Packers, making Dillon the lead back going into 2021 and causing his dynasty value to skyrocket. Even in a worst-case scenario where Green Bay extends Jones, Dillon would play the 1B role alongside him with insulated value as a complementary back and high ceiling if Jones were to miss time.

While Melvin Gordon will turn 28 in April, he’s still a relative bargain for teams looking to contend in 2021. Royce Freeman is an unrestricted free agent, and Phillip Lindsay is a restricted free agent. In a best-case scenario, Gordon could be the clear lead back heading into next season. And even if Denver were to retain Lindsay for depth, Gordon would likely still have the edge in touches. In the 10 games where both Gordon and Lindsay saw significant action this past season, Gordon logged 60 percent of the carries and 65 percent of the targets out of the backfield.

Like Dillon, Gordon’s dynasty ADP is hovering around the ninth round of startups, making him among the value dynasty buys this offseason for a mid second-round rookie pick or less. And while most know to expect a three-game suspension looming as the result of his DUI back in October, his value will undoubtedly dip further in some leagues once the NFL officially issues the suspension, so it might be wise to wait to acquire Gordon until after that news hits for an even cheaper price.

After being drafted in the late first or early second round of many rookie drafts last offseason, Ke’Shawn Vaughn‘s name is mud. The Buccaneers signed Leonard Fournette in September to bolster the backfield, and he and Ronald Jones split most of the work after that. There were few touches leftover for Vaughn, and the rookie was a healthy scratch for the majority of the season, including for the Super Bowl.

But his price is now extremely low compared to his still relatively high upside, making him one of the less risky dynasty buys of the offseason. Despite his DLF ADP, Vaughn can still be acquired for just a third-round rookie pick in many leagues, and some recent trades include him as a throw-in. The hype drove Vaughn’s dynasty value to unreasonable highs last summer, but he can now be considered a potential post-hype sleeper with Fournette a pending free agent and the Buccaneers with little salary-cap space to spare.

With the Ravens having waived Mark Ingram in January, many are high on J.K. Dobbins for 2021, and rightfully so. But don’t overlook Gus Edwards, who overtook Ingram on the depth chart during the season and had a stellar performance on his limited touches. Edwards has an opportunity to sign with another team depending on how Baltimore chooses to tender him, but even if he remains with the Ravens, his fantasy potential is being underrated.

Among all running backs, Edwards was seventh in yards after contact per carry, and he logged the 14th-most rushing first downs despite being 28th in total rushing attempts. And once Ingram was phased out of the offense starting in Week 6, Edwards was the RB22 in PPR scoring from Week 6 to Week 16. Having seen recent trades where Edwards has been acquired for third or even fourth-round rookie picks at times, he’s among the best dynasty buys for a late second-round rookie pick or less given the possibility of a full season of RB2 production next year.

It seems as though Damien Williams has been all but forgotten by the dynasty community after opting out of the 2020 season due to COVID concerns, making him one of the cheapest dynasty buys available. In 2019, Williams led the Chiefs’ backfield in carries and receptions over LeSean McCoy and Darrel Williams. With McCoy long gone and Darrel Williams a pending restricted free agent, Damien Williams is possibly poised to return to a complementary role alongside Clyde Edwards-Helaire in 2021.

Despite Kansas City’s propensity for throwing the ball, ranking as the 10th most pass-heavy team in 2020, the Chiefs were average on the ground, coming in with the 16th most rushing yards per game. And that was in spite of various losses to their offensive line throughout the year. Though the line injuries finally caught up to them in the Super Bowl, there are no concerns for 2021 as long as Patrick Mahomes and Andy Reid remain at the helm. A third-round rookie pick, maybe even less, is a bargain price to take a chance on Damien Williams as the potential 1B in the backfield of the best offense in football.

Many are selling Aaron Jones due to his pending departure from Green Bay, but he could actually see more touches with the right team. Particularly enticing among his rumored suitors would be the 49ers and the Steelers, both of whom boast strong run games. And James White and Jamaal Williams are both complementary backs whose values could rise depending on landing spot, especially with a potential reunion with Tom Brady in Tampa Bay possible for White.