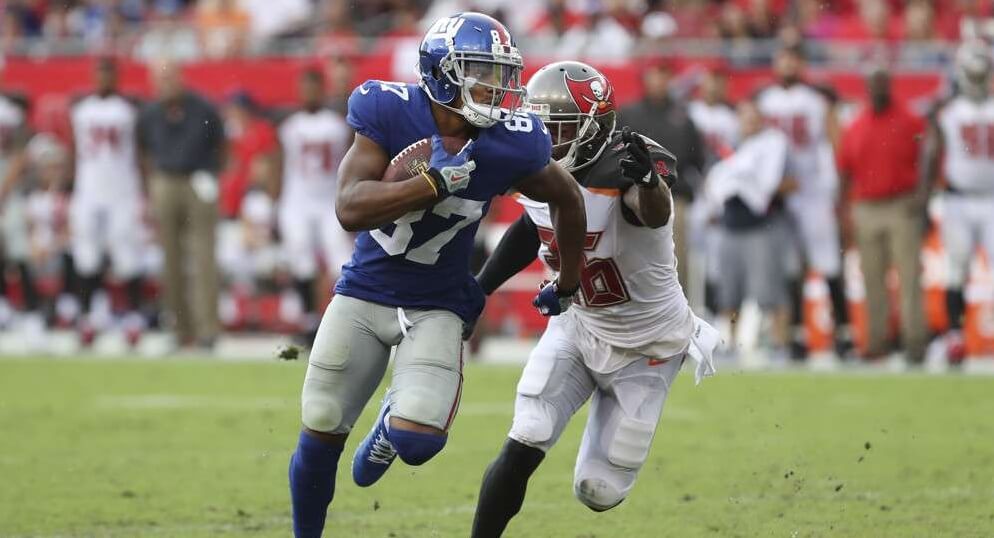 Veterans of all four teams in the NFC East were scheduled to report to training camp this week, with the Cowboys being the final team to do so on Friday. As the preseason officially opens in the division, we take a Fantasy style skill positional look at all of the ballclubs, identifying players and situations to monitor as we go forward.

Quarterback: The preseason won’t mean much for Dak Prescott from a Fantasy perspective, but there is a heavy focus on whether he will get a contract extension. Recent reports indicate the Cowboys are optimistic that a deal can be worked out before the seasons starts. Some Fantasy players continue to wonder if he has more upside, and with maybe his best receiving group yet, he could be more than just adequate in 2019.

Running Back: The Ezekiel Elliott watch is on to see if and when he reports to camp. There really is no solid prediction as to when he will show up, but if he does not report by August 6, he will lose an accrued season towards free agency. If he does not show up by that date, his Fantasy stock will start to drop further, as no one can be sure of when he might end his holdout. Every week that goes by, he will become more of a risky pick. We should get extensive looks at rookies Tony Pollard and Mike Weber in exhibition games as the handcuff situation is worked out, but Weber initially figures to be the direct backup to Elliott.

Wide Receiver: With a full training camp and preseason as a member of the Cowboys, Amari Cooper should enter the season very comfortable and may be on the verge of his most productive season ever. Michael Gallup showed real signs of promise late in the regular season and the playoffs in 2018 and is a great later-round selection. Randall Cobb provides quality depth to the passing game and helps give Prescott his deepest WR crew yet, but he is past the point of providing much stand-alone value.

Tight End: The return of Jason Witten makes this position a Fantasy non-issue. There’s no interest in Blake Jarwin now.

Quarterback: Eli Manning will be given the opportunity to show he can still lead the offense before rookie Daniel Jones is given a chance to start. The offense should be based heavily around the running back, with a high percentage passing approach. But Jones has a stronger arm and throws a pretty good deep ball, so if he look at least respectable in the preseason, the pressure will increase for him to start early as a rookie. Either QB will have to make the NFC East and other defenses honor the passing game to not totally sell out against the run and ensure that the pass-catchers remain Fantasy relevant.

Running Back: Saquon Barkley must hope the passing attack is decent enough for him to not face massive defensive attention on every snap. Regardless, he will be keyed on often, and while he has the spectacular talents to meet the challenge, constant defensive scheming focused on him could be a tiebreaker when deciding between him and another elite RB like Christian McCaffrey. We won’t see Barkley face these situations until the regular season starts.

Wide Receiver: With Odell Beckham Jr. gone, there is now an opportunity for Sterling Shepard to prove he can be a No. 1 WR, and he could at least be a quality Fantasy WR3 in the role. Golden Tate is a NFC East bounce-back candidate who should return to being a very dependable possession guy who can make it happen after the catch. He can re-establish himself to the point where he’ll also be a quality Fantasy WR3 in PPR formats. He should use the preseason to get in sync with his new QBs.

Tight End: Evan Engram has played well when Beckham was out in the past. The preseason won’t offer much to change outlooks on him, as he should be one of the Top 6 TEs off the board in your drafts.

Quarterback: How much work Carson Wentz gets in preseason games will be interesting to watch, but it would be smart to limit his reps because of his already checkered injury history. He won’t be as limited in camp as he was last year, and that is positive news for those who may choose to draft him. He’s a noted injury risk, but Wentz can still be a very good Fantasy starter when available. But it’s questionable whether he can play at the MVP level he did for a good chunk of 2017 as the Eagles soared in the NFC East.

Running Back: Miles Sanders has recovered from a spring hamstring injury and will be a player to watch during exhibition play. While he has nifty moves and may be the best Fantasy RB choice from this team, Doug Pederson may prefer a true committee approach, though. Jordan Howard will be in the mix and Darren Sproles was brought back again. Sanders may be no better than a flex play as a rookie.

Wide Receiver: Alshon Jeffery may also see very limited preseason reps in an effort to keep him preserved. Nelson Agholor is looking to rebound and may do so with a healthy Wentz, but the NFC East return of DeSean Jackson will factor into the picture. He has always been boom or bust and that won’t change. Never trust him or draft him in any format other than Best Ball. Rookie J.J. Arcega-Whiteside could eventually become a key target for Wentz and should be observed closely to see what kind of potential he flashes.

Tight End: Can Zach Ertz stay at the level of his career campaign in 2018? We may see some regression when play starts for real. Dallas Goedert cannot have much stand-alone Fantasy value with Ertz around.

Quarterback: There will be a three-way NFC East battle for the starting job between rookie Dwayne Haskins, free agent addition Case Keenum and returnee Colt McCoy. Haskins is the only one that mildly interests Fantasy types, and his preseason progress will be monitored tightly. He’ll get some two-QB league attention if he performs well enough to start.

Running Back: Derrius Guice is practicing and has regenerated some Fantasy buzz, but will remain an injury concern as are many players who can be susceptible to further issues after coming off major problems. But he will have to get some important exhibition game reps to get back into the flow, and we should see him display his promise when he does. He’s an intriguing gamble for your Fantasy RB depth. Adrian Peterson is not going away, though, and there could be a timeshare here, putting Guice into flex territory at best. AP gives Washington the luxury of not overworking Guice.

Wide Receiver: Nothing stands out here from the worst WR group in the NFC East. But someone will develop a connection with the starting QB and the preseason could help us identify who that is. Josh Doctson will get maybe a last chance to show himself here, and Paul Richardson may only have some hope to be productive if Haskins wins the job. Trey Quinn, last season’s Mr. Irrelevant in the NFL Draft, could actually turn out to be the most dependable pass-catcher here. Rookie Terry McLaurin did play with Haskins at Ohio State, and bears watching for dynasty and deep league purposes.

Tight End: Jordan Reed remains a notorious injury risk but can still be a viable Fantasy option when available. You know what you get with him. Vernon Davis no longer seems to be much of a factor. This position will still be important, though, because of the shaky outlook at WR.

What storylines are you watching in the NFC East? For more great rankings, sleepers, and analysis check out the 2019 Fantrax Fantasy Football Draft Kit.