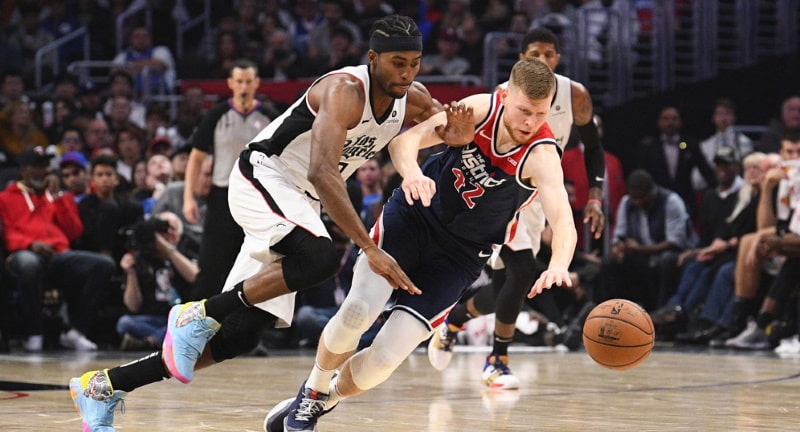 We’ve now reached the final stretch of this chaotic season, as NBA teams make their final push toward the playoffs, and fantasy basketball teams who reached the postseason look to win their respective leagues. Unfortunately, this crucial time of the year has been met with an abundance of injuries to several high-profile players. It seems like a big name player is going down every night lately, and one has to wonder if this somewhat condensed season is taking a toll on the players.

Obviously, these injuries are a devastating loss to not just their teams who are fighting for the playoffs, but also everyone’s fantasy teams. In both cases, bench players are forced to step into a bigger role, being asked to produce at a higher level than they likely have been. In fantasy hoops, these guys can provide tremendous value down the stretch, and they can be the difference between a solid team and a championship team. So let’s take a look at some guys who are likely to see an increased opportunity as a result of a teammate going down in the last few days.

When Jamal Murray suffered a torn ACL a week ago, I talked about how Monte Morris would be a main beneficiary from the injury. Unfortunately, the former Iowa St. standout has now joined Murray on the bench with a right hamstring strain. It’s another tough injury for a Nuggets team that is currently clinging to the 4 seed in the Western Conference. They are now obviously very thin in the backcourt with their top two point guards out of action.

Aside from Morris, Will Barton was another major beneficiary that I mentioned last week, and he has been great thus far. The veteran has carried a much larger load on the offensive end, helping lead the team to a 2-point win over the Grizzlies a few days ago with 28 points, 6 rebounds, and 7 assists. He should continue to thrive as one of the top remaining playmakers for the Nuggets.

In addition to Barton, Facundo Campazzo is now locked in as the team’s number one point guard, likely for the duration of the fantasy playoffs. Campazzo likely won’t blow you away with any of his stat lines, but he’s now essentially guaranteed to see minutes in the 30s on a nightly basis, and he’s plenty capable of providing enough production across the board. The first-year, 30-year-old point guard out of Argentina has collected 7 steals in his last five games and he can shoot the ball well from deep, knocking down 19 triples in his last nine games. He should be a solid source of threes, assists, and steals down the stretch, now functioning as the starting point guard for a high-powered offense.

Already dealing with several injuries to a number of key role players, the Hawks must now deal with the loss of their star point guard, Trae Young. Young sprained his left ankle in the second half of their eventual loss to the Knicks last night. He looked to be in a great deal of pain, and while there is no known timetable for his return, a somewhat lengthy absence should be expected. Even if the injury ends up not being too serious, the Hawks will likely be cautious with their franchise player, as they try to head into the postseason as close to full health as possible.

Brandon Goodwin closed out last night’s game in place of Young, and he should become the Hawks primary point guard for the foreseeable future. Goodwin started back-to-back games on April 11th and 13th when Young sat out, and he had two very strong performances. The undrafted 25-year-old averaged 17.5 points, 5 rebounds, 5.5 assists, a steal, and 3 threes per game in 37 minutes per contest, shooting 50% or better from the floor in both games. Looking like he might be Atlanta’s starting point guard for a while, Goodwin should be a must-add in fantasy leagues.

After seeing an increase in minutes and production over the past few weeks with the Wizards trying to develop their first round rookie, Deni Avdija‘s season has been cut short due to a hairline fracture in his right ankle. He suffered the injury in last night’s game against the Warriors, and while he likely won’t have to undergo surgery, it’s still a brutal way to finish off a promising rookie season.

Davis Bertans started the second half of last night’s game in place of Avdija, and he should be the main beneficiary over these last few weeks of the season. Bertans has looked really good over his last two games, knocking down 10 triples on his way to a combined 40 points between the two contests.

Bertans doesn’t do a whole lot beyond scoring and hitting threes, but there is still plenty of value to be had in that, especially when he does it so efficiently. The big man averaged 3.4 threes per game in five previous starts this season, a number that would have put him in the top 10 in the NBA if he maintained that pace throughout the season. And after knocking down 3.7 threes per game last season, we know that his sharp-shooting is no fluke. Stephen Curry aside, it is entirely possible that Bertans paces the league in threes the rest of the way.

Chris Boucher suffered a sprained left knee last night against the Nets after an awkward landing while going for a rebound. The severity of the injury is still unknown, but it would not be a surprise to see him miss at least a few games given the nature of the injury. After battling a number of injuries as a team, the Raptors were finally nearing full health before Boucher went down. By far the team’s best rim protector, this will just be one more obstacle to overcome as Toronto tries to fight their way into the play-in matchups after an overall disappointing season thus far.

Having greatly impressed coach Nick Nurse in his first six games as a Toronto Raptor, Khem Birch will likely see an additional minutes boost in light of the injury to Boucher. Birch has already been seeing a much greater opportunity on the floor than he had in his whole career with Orlando, and now he will look to capitalize on his chance at the starting center spot for the Raptors.

In his last five games, Birch has put up strong averages of 9.8 points, 6.4 rebounds, 1 steal, and 1.6 blocks per game on an efficient 53% from the floor. Now with the injury to Boucher, Birch could flirt with the 30-minute mark on a nightly basis, despite never averaging so much as 20 minutes per game in four seasons with the Magic. Birch appears ready to take full advantage of this opportunity, and he is capable of putting up solid big man stats the rest of the season.

Bulls leading scorer Zach LaVine is expected to miss the next week and possibly more due to health and safety protocols. Given the original 10-14 day estimate, it seems likely that LaVine tested positive for COVID-19, which could potentially lead to a slightly lengthier absence. Currently just a game out of the 10th seed and the chance to make the playoffs via the play-in round, the Bulls will likely run their offense through Nikola Vucevic even more than usual as they try to move up in the standings despite this tough loss.

With the absence of LaVine, Coby White seems to have received another chance at consistent minutes in the 30s, after struggling through much of the season. Seeing 30 or more minutes in each of his last four games, White has actually looked a bit like the player Chicago was hoping to see all year. The sophomore out of UNC is averaging 17 points, 3.3 rebounds, 7.3 assists, and 2.5 threes per game in that span, helping lead the team to two wins after dropping five in a row. White is as inconsistent as a player can get, but he has the potential to explode on any given night and could be a top performer down the stretch.