NBA Trends and Injuries: 11 Players on the Rise 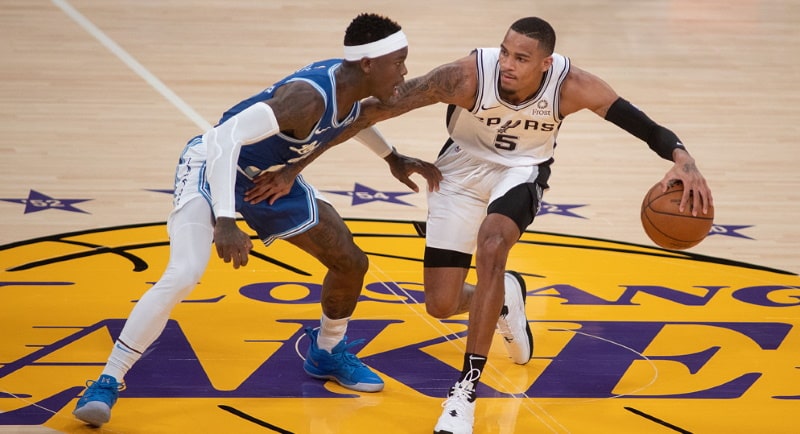 Another week of basketball in the books, and we creep closer and closer to the season’s midpoint. I can’t speak for everyone, but it feels to me like the NBA season just started a couple of weeks ago. Yet somehow, we are now only 8 days away from the start of the All-Star break.

Without the typical All-Star festivities taking place this year, the short break provides little more than a nice rest for players, especially those who are injured or just generally banged up from the day-to-day grind of the NBA season. With this in mind, some players might be more likely to sit out these last few games. It makes good sense for them to sit out a few days and then have the All-Star break to fully recover, as opposed to rushing back and risking further injury.

Fortunately for our fantasy teams, when one guy sits, new opportunities are created for others. So let’s take a look at some of these injured bodies, and see which NBA players are trending up thanks to their expected absences.

After putting up 16.7 points per game across his last seven, including three games with 22 points, Delon Wright suffered a grade 2 right groin strain, forcing him out of action for at least two weeks. It’s tough timing for the former first-round pick, as he was being given as many minutes as he could handle of late. However, with the rebuilding Pistons already thin across the roster, his absence has opened the door for a massive opportunity.

Upon hearing of Wright’s injury, the natural thought was that Dennis Smith Jr. would take over as the starting point guard. But while he has gotten both starts, it has been the rookie out of Vanderbilt, Saben Lee, who has taken advantage of the opportunity. Despite the fact that 90% of you likely have never heard of Lee, the second-round pick has produced 16.5 points, 3.5 rebounds, 4.5 assists, and 2.5 steals on 67% shooting in the last two games. Pistons coach Dwane Casey has been heaping praise on Lee for his hard work behind the scenes, and that hard work seems to be paying off. Given that the Pistons are in a full rebuild mode, they have no reason not to let their rookie keep playing big minutes to see what he can really do. Lee is trending up fast, so pick him up before it’s too late.

The Spurs are finally returning to game action after postponing their previous four games due to a covid breakout, but they are unfortunately doing so without half their team. San Antonio will suit up against the Thunder tonight without six of their key rotation players, including five of their top six players in terms of usage rate. Keldon Johnson, Rudy Gay, Devin Vassell, and Derrick White are all out due to health and safety protocols. Meanwhile, DeMar DeRozan is out for personal reasons, and LaMarcus Aldridge is questionable with a hip injury. Needless to say, plenty of guys will see an increase in playing time and usage rate for as long as the bulk of their team remains out.

In the last paragraph, I said that five of San Antonio’s top six players in usage rate will be sitting out. Murray is the one who isn’t. The 24-year-old, already having a breakout year, could put up monster numbers for as long as these guys are out. The ball should be in his hands for the majority of the game.

While he doesn’t do much outside of score, the third-year wing out of Miami knows how to get buckets. In his last three games in which he topped 30 minutes, Walker notched 25, 24, and 14 points, respectively. He should be a lock to see at least that much floor time now, meaning the points should be there as well.

The former lottery pick out of Utah has always shown flashes of being a dominant big man, and something seems to have clicked for him recently. Seeing more minutes than he’s used to because of Aldridge being out, Jakob Poeltl has capitalized with 10.2 points, 9.7 rebounds, and 3 blocks per game in his last six contests. With so many Spurs now out, the minutes should stay high, and the offensive production might continue trending up with the team in desperate need of offense.

Similar to the Spurs, the Rockets are another team decimated by injuries and absences. Victor Oladipo remains out, though he is day-to-day and could potentially return as soon as tonight. Eric Gordon and P.J. Tucker are also both questionable with an ankle and quad injury, respectively.

Just days after his NBA contract was guaranteed for the rest of the season, the Rockets decided to release Cousins. Boogie had played a season-high 37 minutes in his last game, and he had a 22.7% usage rate on the season. Already, filling in for the injured Christian Wood, the move makes the already thin Rockets even thinner in the frontcourt.

The undrafted rookie out of Ohio State has been a very pleasant surprise for the Rockets this season. He has really come into his own in the last couple of weeks, taking full advantage of Houston’s plethora of injuries. Tate is trending up of late, averaging 14.5 points, 6.3 rebounds, 2.7 assists, 1.5 steals, and 1.2 threes per game in the last two weeks on an efficient 57.8% from the floor. A terrific rebounder despite being just 6’4″, he should continue to see ample opportunity as the Rockets continue to utilize smaller lineups with even more regularity.

The fourth-year center out of Creighton played 21 minutes Monday in his season debut, scoring 4 points to go with 6 rebounds and an impressive 3 blocks. Patton is on his fourth NBA team in as many years but seems to have fallen into a golden opportunity in Houston. Aside from Rodions Kurucs, who has done less than nothing since being traded over from the Nets, Patton is the only healthy player on the roster taller than 6’6″. Yes, the Rockets play small ball as much any team in the NBA, but there is always a need for a true big man. He is definitely someone to watch until Wood returns from injury, especially if getting minutes in the 20s becomes a trend.

In previous editions of this article, John Collins has been the beneficiary of other players dealing with injuries. Unfortunately, he is now dealing with a possible concussion after being elbowed in the head during last night’s game. Collins is second in usage rate on the team, after Trae Young, since De’Andre Hunter went down. This would therefore leave a lot of playmaking opportunities available if he is forced to miss any games.

The veteran forward hasn’t quite been himself since returning from injury, shooting a lowly 29.3% from the field over the past two weeks. However, an expected boost in playing time and more plays with the ball in his hands could help Gallo break out of his funk and find his rhythm again.

Huerter broke out of a mini-slump with 22 points and 4 threes last game when Collins exited early. His playing time likely won’t be affected too much if Collins were to miss time, but his usage rate could see a nice spike. Huerter would likely become the team’s second option on offense, and his scoring numbers would trend up.