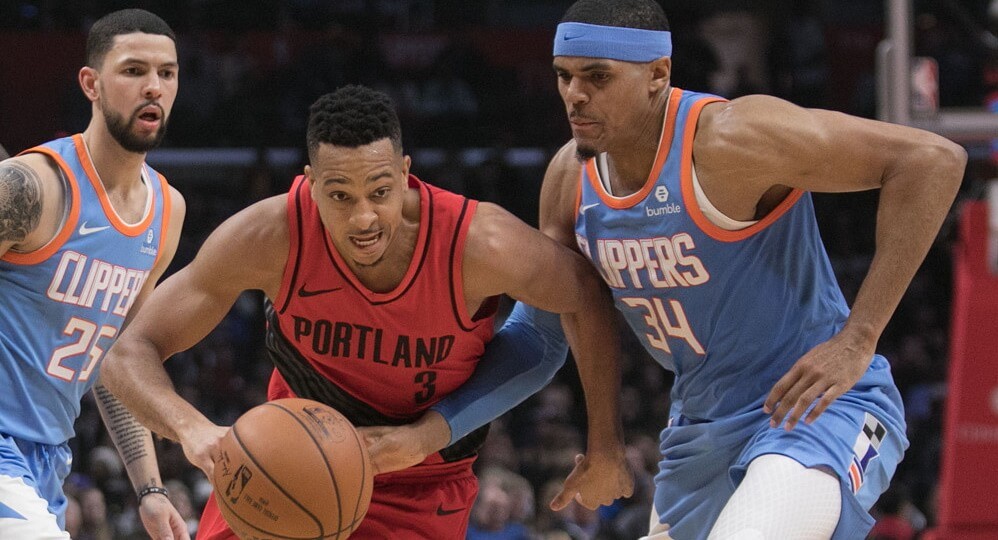 The 7’3’’ man from Latvia was ruled out for yesterday’s game against the Portland Trail Blazers at noon, which was certainly not ideal. He ended up missing his tenth consecutive game on the shelf with his sore right knee. Don’t sweat it so much, it isn’t the same one in which he had the ACL surgery. But it has forced him to take time off and that’s never a good thing. Coach Rick Carlisle said he didn’t have a setback, but was a bit sore and remains day-to-day. “We hope this thing resolves. All I know is he’s out tonight and had a good day today,” were Carlisle’s words. Porzingis could return for the Mavs’ next game in January 21 but it’s not a given. He is averaging 17.3 PPG, 2.2 3PM, 9.4 RPG, 1.5 APG, 0.6 SPG, and 2.1 BPG.

CJ McCollum landed on the feet of a foe on Friday night, twisting his ankle in the process. He limped to the locker room and didn’t return, so he may miss a game or two at a minimum unless he is a very, very fast healer. However, he was evidently in pain and it remains to be seen if the Trail Blazers will have him go through some imaging to rule out a more serious injury. From January 7-11, he was in a bit of a shooting funk at 36% from the field, but he rebounded in his last two games to shoot 50% en route to 27 and 24 points. He had only four last night when he had to go out. Owners will hope he doesn’t miss much time and returns quickly from his nightly averages of 21.9 PPG, 2.7 3 PM, 4.1 RPG, 3.8 APG, 0.8 SPG, and 0.7 BPG.

Fantasy benefactors: Troy Brown Jr., Jordan McRae (dealing with an ankle issue of his own)

The 21-year old power forward is still recovering from a minor procedure in his right groin. On Wednesday, he got some shots in practice but wasn’t even jumping. The limp is disappearing from his walk and he is already lifting weights. It has been a slow process but to be fair, Washington isn’t in a hurry to get him back: they aren’t going anywhere this season. For what is worth, coach Scott Brooks said he didn’t know if Hachimura would return from his injury in January, so don’t expect to see him for a couple of weeks, at the very least. He was averaging 13.9 PPG, 0.4 3PM, 5.8 RPG, 1.6 APG, and 0.7 SPG.

After having one of his finest games of the season (and maybe of his career) on Sunday (25 PTS, 15 RBS, 3 STL, 2 BLK, 2 AST, 2 3PM) Oubre missed Thursday’s contest and will miss Saturday’s with a concussion. He is in the protocol and needs to be cleared first. The most impressive thing is that he sustained the head injury in the first quarter of Sunday’s game, which means he not only played through it, but he also excelled. Mikal Bridges may see a huge uptick in minutes until Oubre, who was averaging 18.3 PPG, 1.8 3PM, 6.3 RPG, 1.6 APG, 1.5SPG and 0.8 BPG, returns.

Fantasy outlook: He is now largely irrelevant due to Caris LeVert and Kyrie Irving

It seems like the Brooklyn Nets can’t have all their guards together in the same game. Speaking of his teammates, they are the reason why Temple is now an afterthought in fantasy basketball: with Caris LeVert and Kyrie Irving healthy, there simply won’t be many minutes for Temple. He hasn’t played since January 12 with his right knee contusion but should return on Monday. His rest of the season outlook isn’t very good but he managed to produce some useful numbers with the stars on the shelf: 10.5 PPG, 2.1 3PM, 3.4 RPG, 2.6 APG, 0.9 SPG and 0.5 BPG.