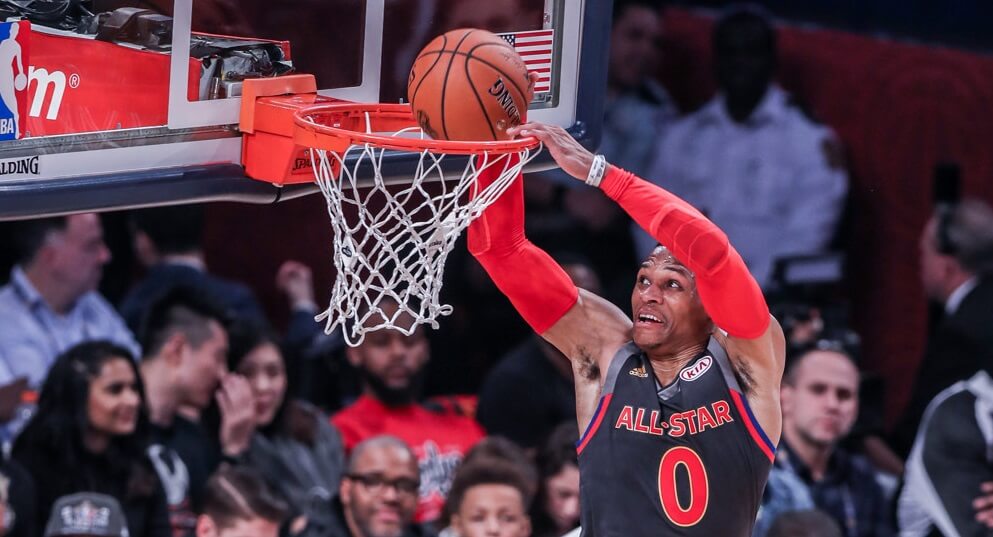 Monday’s article was one of my best of the season. Not only did we get brilliant performances from studs like Andre Drummond and Kyrie Irving, but we also got stellar games from Al Horford, Tobias Harris, Josh Hart and a career game from Eric Paschall. We’re going to look to build off of that momentum here, so let’s get into our 11/6 NBA DFS Plays of the Day!

It really surprises me that Westbrook remains in this price range on both DraftKings and FanDuel. We’re talking about a guy who sat between $11,000-$12,000 last season and he really hasn’t seen much of a fall-off in terms of production. In fact, Westbrook is still averaging 21.2 points, 9.8 rebounds 9.2 assists and 1.8 steals per game this season. That’s more than enough from a player in this price range and we absolutely love him against a Golden State team who ranks dead-last in defensive efficiency.

With Stephen Curry, Draymond Greem, Klay Thompson, and D’Angelo Russell all injured, Bowman has found himself as the starting point guard for the Warriors. It’s not just that, he’s essentially found himself as the only point guard on the roster. That’s evident when you see that he’s played at least 37 minutes in back-to-back games, averaging 35 DK points per game in that span. The simple fact is, Bowman is going to fall into value simple through sheer volume. What adds to his intrigue is this matchup against the Rockets, with Houston playing at the second-fastest pace in the league while sitting 28th in defensive efficiency.

While Williams has mixed duds and gems so far this season, he could be looking at a monster role here. The reason for that is because Kawhi Leonard is resting. That leaves Williams as the only true play-maker left on this roster and it should force him into a huge game. With Leonard off the floor this season, Williams is leading the team with a 35 percent usage rate while averaging 1.2 DK points per minute. That’s big news for a guy who could be starting and looking at 35 minutes of action.

With Derrick Rose, Reggie Jackson and Blake Griffin all injured, Brown has found himself in quite the role for the Pistons. Not only is he starting, but he’s also actually taking over a ton of the ball-handling duties. That’s evident when you see that he’s scored at least 39 DK points in back-to-back games while averaging close to 40 minutes of action. Those 40 minutes paired with a 23 percent usage rate make him a near guarantee to provide a fantasy point-per minute and that’s ridiculous production from a player who’s only $5,300 on both sites. Not to mention, he gets to face a Knicks team who ranks 21st in defensive efficiency.

The forward selections on this slate are an absolute disaster with all of the injures, so we’re going to stick with just one small forward and one power forward. We’ll go ahead and offer up a cheap small forward here, in order to get studs like Giannis, Harden, Drummond and Westbrook into your lineup. Porter makes for a great pairing with any of those guys because he has way too much upside to be priced this cheaply.

We’re talking about a guy who was $7,000 this time last season and it’s just a matter of time before he creeps closer to $6,000 on both sites. Recent results tell us that’s right around the corner, with Porter setting season-highs in fantasy points in three of his last four games, averaging 26 DK points per game in that span. We’re also not concerned about an Atlanta team that ranked bottom-three in total defense last season.

Also Consider: Giannis Antetokounmpo, MIL at LAC: If you want to pay up, Giannis is one of the best plays on the board with his 62 DK points per game.

Randle’s efficiency numbers paint an ugly picture but the fact that he’s been posting solid fantasy numbers tells us that he’s right around the corner from a hot streak. Despite shooting 42 percent from the field, six percent from three-point range and 61 percent from the free-throw line, Randle is still averaging 34 DK points per game. What we like is that he’s playing over 33 minutes per game. That pairs beautifully with the fact that he’s taking more than 13 shots while ranking second on the team with a 23 percent usage rate. That’s bad news against a team who’s very shallow at the power forward position with Griffin injured and that’s no surprise when you see that they have a 23rd OPRK against opposing PFs this year.

Also Consider: Richaun Holmes, SAC at TOR: Holmes has been starting the last four games, averaging more than 30 DK points per game across 29 minutes of action.

Many of you probably thought I was going to go with Drummond for the third-straight day but you all know he’s a great play. Let’s go a little off the radar and give you Harrell. This dude has been stellar all season long, scoring at least 27 DK points in six of his seven games while averaging more than 31 fantasy points per outing. He tends to be even better with Leonard off the floor too, posting a 31 percent usage rate in these circumstances while averaging 1.3 DK points per minute. We’re really not concerned about Milwaukee either, surrendering the fourth-most fantasy points to opposing centers this season.

Capitalizing off of injuries is a major theme in this article, so let’s keep that trend rolling here with Goga. The Georgian center has found himself starting the last few games, with Myles Turner and Domantas Sabonis both injured. That’s led to him scoring at least 26.5 DK points in three-straight games despite playing just 25 minutes per game in that span. Averaging 30 DK points across 25 minutes of action equates to 1.2 DK points per game and that’s stellar output from a player priced so cheaply. All of that would make him a great play against anyone but facing the Wizards is quite a treat too. Not only do they rank ninth in pace, but they also sit 26th in defensive efficiency and 27th in points allowed.