NBA DFS Plays for Wednesday, 1/8: Bank on the Beard 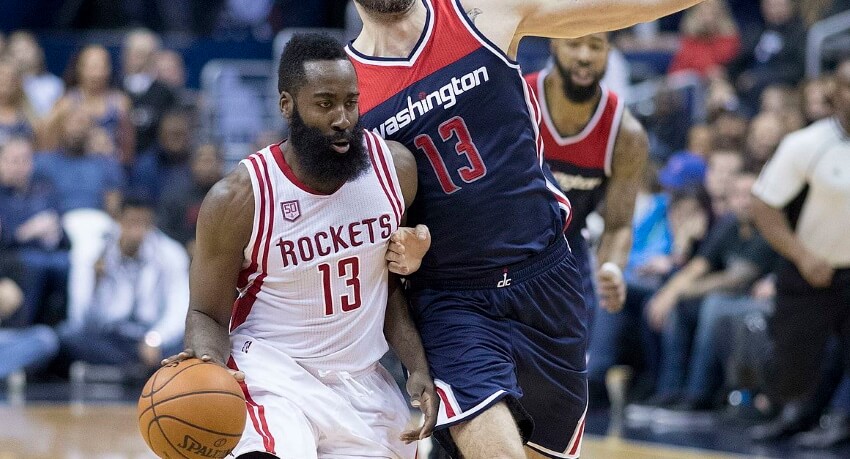 After killing it the last few weeks, we had a subpar showing in the Monday article. While we did get some great performances from Markelle Fultz, Rudy Gobert and T.J. Warren, we also got duds from Paul Millsap, Maxi Kleber and Aaron Holiday. Just looking at the list of names of those busts makes it all the less surprising but that’s bound to happen when we recommend so many cheap players. In any case, we’re looking to return to our previous form, so, let’s get into our 1/8 NBA DFS plays of the day!

With Fred VanVleet, Pascal Siakam, Marc Gasol and Norman Powell all sidelined, Lowry should continue to run the show for the Raptors. With those four guys off the floor, Lowry leads the club with a 32 percent usage rate while averaging 1.5 DK points per minute. That per-minute production is absolutely brilliant for a guy who’s been playing nearly 40 minutes a game this season, equating to a 60-point average. Facing Charlotte is the icing on the cake, with the Hornets ranked 27th in defensive efficiency.

Satoransky is quietly having a nice season for the Bulls and it’s a wonder why he’s not closer to $7,000 on these sites. Not only does he have a 20-point floor over his last 10 games, Satoransky is also averaging 31.1 DK points per game across 33 minutes of action in that span. We love that sort of production in a matchup like this, with the Pelicans sitting 28th in total defense while ranking seventh in pace.

This is the highest-priced player I’ve recommended all season long and I rarely try to do that. This article is all about value but I think it’s impossible to fade Harden on this slate. The reason for that is because he leads all players with 63.3 DraftKings points per game and gets to play without Russell Westbrook. With him off the floor, Harden has a ridiculous 47 percent usage rate while averaging 1.7 DK points per minute. That’s impossible to overlook, especially against a 29th-ranked Atlanta defense.

Mitchell found his way into Monday’s article and we want to continue to ride him as long as Conley is out. That’s made him the primary ball-handler, which is big news for a guy who fires up shots at will. Over his last 26 games played, DM is taking 21 shots per game across 35.3 minutes per outing. It’s led to some stellar fantasy production recently too, averaging 40 DK points per game across his last 12 fixtures. If he sees that sort of workload here, Mitchell should roll right through a 24th-ranked Knicks defense.

With Jrue Holiday sitting this game out, Ingram should be in line for a monster workload. That was certainly the case on Monday when BI had 35 points, eight rebounds and five assists against an elite Utah defense. With him off the floor this season, Ingram has a 32 percent usage rate while averaging 1.34 DK points per minute. That’s no surprise when you see that he’s averaging over 43 fantasy points per game, making him an easy pick against a subpar Bulls team.

Ingles just continues to hover in the $6,000-range and it really doesn’t make sense. This is a guy who’s been a stud ever since Conley went down, averaging 32.2 DraftKings points per game across 34 minutes of action in his last 14 games played. That’s really all you can ask for from a player this cheap and we love that he faces a New York squad who ranks 24th in defensive efficiency.

Favors has completely turned the Pelicans season around with his recent play and it’s becoming clear that he’s a major part of this club’s plans. The thing that’s really changed is his workload, playing at least 27 minutes in eight-straight games. That has led to him scoring at least 28 DK points in all eight of those fixtures while averaging 36 fantasy points per game. That has to be scary for the Bulls, allowing the second-most fantasy points in the league to opposing centers this season. That doesn’t even take into consideration that they’ll be without Wendell Carter Jr, making their interior defense even more inferior.

The final piece of the Favors write-up is why we like Young. Many season-long owners have pivoted to Daniel Gafford as the go-to guy in the absence of Carter but I think it’s going to be Young. This is a coach who wants a veteran presence in there and that should guarantee Young 25-plus minutes in a spot like this. This is typically a guy who averages 30-plus fantasy points when playing 25-plus minutes, dropping 32.2 DK points across 27 minutes in the last game. We can’t argue with this tasty matchup either, facing a Pelicans club who sits 26th in defensive efficiency and 28th in points allowed.

Westbrook has a tendency of stealing rebounds from big men but Capela should feast the glass with him off the floor. So far this season, the big man is averaging 14.5 points, 14.2 rebounds and 1.8 blocks en route to more than 40 DraftKings points per game. Those numbers make him attractive against anyone but particularly the Hawks. Not only do they surrender the third-most fantasy points to opposing centers, they also rank 28th in defensive efficiency and 29th in points allowed.