NBA DFS Plays for Wednesday, 1/15: In Love With LaVine 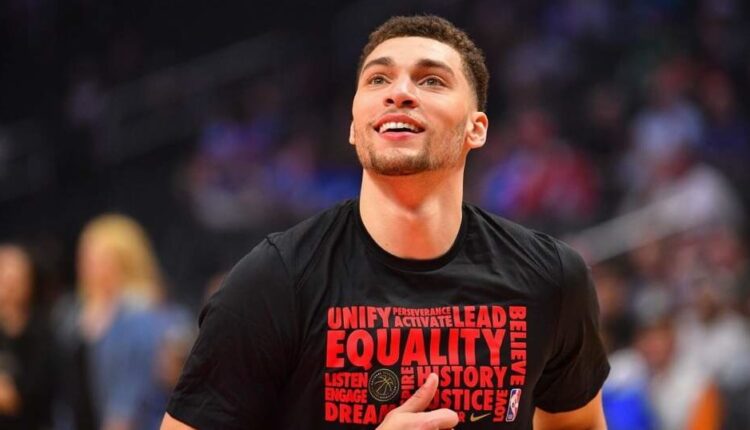 We’ve had a ton of great recommendations recently but Monday’s article was just one of our rare bad days. We had Hassan Whiteside and Andre Drummond play limited minutes (for whatever reason) and got a really disappointing performance from Chris Paul. Lonzo Ball, Nemanja Bjelica and Terry Rozier treated us with some nice games but it’s embarrassing for me to miss on those big-name players. That’s why we’re going to do better here, so, let’s get into our 1/15 NBA DFS plays of the day.

Fox is a future superstar in the NBA and it’s hard to understand why these sites are keeping his price so affordable. Not only has he scored at least 28 FanDuel points in all 12 healthy games he’s played since returning, but Fox is also averaging 42.7 fantasy points per game in that span. He’s been even more ridiculous recently, collecting 50 points, 17 rebounds, 20 assists, five steals, and three blocks combined over his last two games. That makes him one of the hottest players in the league and he should have no trouble continuing that against a 17th-ranked Mavericks defense. If you prefer, Ben Simmons is absolutely rolling right now without Joel Embiid and gets a good matchup against the Nets.

Recent form is not going to be encouraging but I love Sato in this matchup. Not only is it a revenge game for the former Wizard, but it also happens to be the best matchup in basketball. That’s evident when you see that Washington sits dead-last in points allowed and defensive efficiency while allowing the most fantasy points to opposing PGs. That’s a perfect recipe for a player who’s averaging 28 DraftKings points per game across his last 13 fixtures. Playing nearly 33 minutes a game in that span while handling the ball a ton is a recipe for success against a team like this and it makes these price tags truly shocking.

While Chicago downright stinks, LaVine is playing some of the best basketball of his career right now. Scoring at least 33 DK points in 13-straight games says a lot about his consistency, but averaging 43.7 fantasy points per game in that span shows just how high his ceiling is. Those numbers are even better recently, averaging 47 DK points per game across his last seven outings. That should allow him to destroy a Wizards defense who surrenders the third-most fantasy points to opposing shooting guards this season while sitting last in nearly every defensive metric.

Man, this FanDuel price tag is just weird. Sure, Beal has been in and out of the lineup due to injury but he’s been an absolute stud whenever he suits up. That’s crystal clear when you see that he’s averaging 44 FanDuel points per game this season. It’s no surprise he’s done so well when you look at his 32 percent usage rate to go along with his 36 minutes and 22 shots per game. If he gets that kind of role against the Bulls, he could go nuts in a game with a 4.5-point spread and 227-point total.

Ben Simmons actually just missed the cut for my article because we want to get as many Sixers in there as possible. The reason for that is because Joel Embiid is injured, opening up 23.4 points, 12.3 rebounds, and a 31 percent usage rate. Harris has actually been the biggest beneficiary in his absence, leading the team with a 26 percent usage rate while averaging about 20 shots per game in the 10 games Embiid has missed. That’s a major reason why Harris has at least 33 DK points in five-straight fixtures heading into this tasty matchup.

Warren is simply too consistent to be priced this cheaply. Outside of one dud against an elite Miami Heat defense, T.J. has at least 27 DraftKings points in nine-straight games. In those nine games, Warren is averaging 35.1 fantasy points per outing. We love that he’s taking 15 shots per game in that span while playing about 34 minutes as well, which makes this floor all the less surprising. We happen to love this matchup too, facing a Minnesota defense who owns a 27th OPRK against opposing small forwards this season.

While Harris has seen the biggest usage bump in the absence of Embiid, Horford is the one who’s really seen the biggest fantasy output. In the 10 games without Embiid this season. Horford is averaging just shy of 40 fantasy points per game. That’s fantastic from a player in this price range and the matchup isn’t too shabby either. Brooklyn is surrendering the sixth-most fantasy points to opposing centers this season which is where Horford will play most of his minutes in this game.

Let’s go right back to the well. Bjelica treated us with a career performance on Monday and it’s hard to understand why he remains so affordable on FanDuel. Averaging over 26 fantasy points per game as a starter is impressive on its own but averaging over 40 FD points per game across his last three fixtures is simply stupendous. The simple fact is, Bjelica is playing a much bigger role with Richaun Holmes injured and he should continue to see a ton of shots and rebounding opportunities in his absence. Getting to face a terrible Mavs frontcourt isn’t too bad of a proposition either.

Charlotte has been downright atrocious against big men this season, allowing the most fantasy points in the league to opposing centers. That’s got to be terrifying against a guy like Jokic, who’s arguably the hottest center in the NBA right now. Over his last 20 games played, Jokic is averaging 23.4 points, 9.7 rebounds and 6.5 assists per game. That equates to a 46-point DK average which is scary considering he’s only averaging 31.6 minutes and 16 shots per game in that span. He’s trying to be more cognizant of taking shots and that’s horrifying for a Hornets defense with very little sting.

If this dude would just play 30 minutes a game, he would be one of the best fantasy producers in the NBA. What I like is that Kanter got a start on Monday and played 26 minutes. If we can get 26 minutes out of this guy, Kanter would be one of the best per-dollar values on the board. The reason for that is because he’s averaging 11.6 points and 11.5 rebounds across 21.4 minutes over his last 15 fixtures. That’s 30.6 DK points per game and he’d be flirting with a 40-point average if he played 26 minutes a game. His big body will be needed against Andre Drummond and the Pistons too, which is awesome considering they own a 25th OPRK against opposing centers this season.