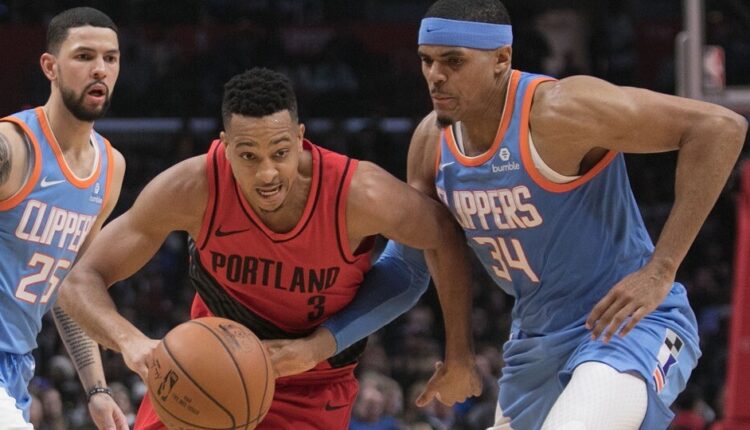 That was one of the best All-Star breaks of recent memory. We got a brilliant Saturday night and an even better game on Sunday. That’s got me totally hyped for the second half and I can’t wait to get back into some DFS. Without further ado, let’s get into our 2/21 NBA DFS plays of the day!

While Holiday is a bit riskier with Zion Williamson and Brandon Ingram healthy, he’s simply too good to be priced this cheaply. We’re talking about a guy who’s averaging 40 fantasy points per game for the year. That alone should make him an $8.500 player and it’s hard to understand this pricing. The best part about this play might be the matchup though, with Portland allowing the fourth-most fantasy points to opposing point guards this season. That’s evident when you see that Holiday is averaging 42.3 DraftKings points in three meetings with the Trail Blazers this year.

With John Wall injured and Isaiah Thomas released, Smith has found himself back to starting point guard duties. This is a guy who’s performed as a starter throughout his career too, averaging 25 DraftKings points across 29 minutes in his 16 starts this season. That’s really all you can hope for from a player below $5,000 and we haven’t even discussed this brilliant matchup. Not only does Cleveland rank 29th in defensive efficiency, they also own a 29th OPRK against PGs this season as well.

McCollum is my favorite play on the board. The reason for that is because Damian Lillard is injured. With him off the floor, C.J. leads the team with a 35.1 percent usage rate. That’s pretty much on par with Lillard’s usage for the season and it’s scary to think how good this guy can be in that Dame role. This is already a stud who’s averaging 35 fantasy points per game for the season and one would have to believe that he has a 40-point floor in this expanded role. Not to mention, he gets to face a 28th ranked Pelicans defense who allows the second-most fantasy points to opposing SGs.

Oladipo has had his minute’s restriction lifted and that means it’s just a matter of time before he returns to the $8,000 player we fell in love with. While he’s struggled to produce in his limited minutes this season, the role is still there. In fact, Oladipo leads the team with a 26 percent usage rate while averaging 12.1 field goal attempts in fewer than 25 minutes of action despite shooting 32 percent from the field. We believe that he’ll play about 35 minutes from here on out which would equate to nearly 20 shots at that pace. If we get 20 shots and a 26 percent usage rate out of someone this talented, Oladipo should roll right through a Knicks team who ranks 22nd in defensive efficiency and eventually find his shot.

With Kemba Walker missing this game, Hayward should be one of the primary ball-handlers for the Celtics. That’s a huge boost for a hot player like this, with Hayward averaging 37.7 DK points per game across his last 13 outings. That’s actually not far off of his impressive season average (35 FPG) and it’s about time that these sites raise his price tag. What we really love is this matchup though, with Minnesota ranked 27th in points allowed while owning a 30th OPRK against opposing SFs according to FanDuel.

When Mike Conley is away, Ingles gets to play. That’s just the case here, with Conley sitting out due to rest. If you look at the 20-game span that Conley missed earlier this season between December 8 and January 18, Ingles averaged 31.4 DraftKings points per game. The main reason he saw such a boost is because he’s essentially the point guard in Conley’s absence, leading the team with 6.3 assists per game in that span. That makes him tough to fade below $5,000, particularly against a San Antonio team who owns a 23rd OPRK against opposing SFs.

It’s just strange that Davis remains below five-figures on DraftKings. This is a dude who’s averaging 51 fantasy points per game for the season and is one of the only players in the league who have legitimate 80-point upside. That’s certainly been the case in his first two outings against the Grizzlies this season, averaging 61 fantasy points per game. That’s really no surprise when you see that the Grizzlies rank fifth in pace and 21st in total defense.

McCollum and Melo are going to be asked to carry this offense and that’s surely going to light up Anthony’s eyes. With Lillard off the floor, Carmelo is second on the team with a 27 percent usage rate. Anyone with that sort of usage rate is hard to avoid, especially considering he’s likely looking at about 20 shots and 35 minutes of play. An increased role like that is even more intimidating against a Pelicans team who sits 28th in total defense. All of that would make me think that Melo is $7,000 on both sites, as we’re looking at quite the discount.

There’s some talk that Drummond forced Cleveland’s hand in the Jim Beilein departure and that would make one believe that the 22 minutes he saw in Beilein’s final game is something we won’t see again. The big man still dropped 37 fantasy points in those 22 minutes of action and that’s pretty much on par with his rate for the rest of the season. This is a guy who’s averaging 48.4 DK points per game for the year and it’s just a matter of time before he starts doing that for the Cavs. The drop in price is one of the major reasons we like him today but facing the worst defense in the NBA is simply the icing on the cake.

Turner has been in this article a ton recently and it’s hard to understand why he remains so cheap. There’s no doubt that he’s been a disappointment for season-long fantasy owners who took him in the third-round but paying $5,000 for him on these sites is a different story. This is a guy who’s averaging 27 DK points per game for the season while averaging 33 fantasy points per game across his last three fixtures. The reason we think he can keep that rolling is this matchup, with the Knicks surrendering the fifth-most fantasy points to opposing centers.