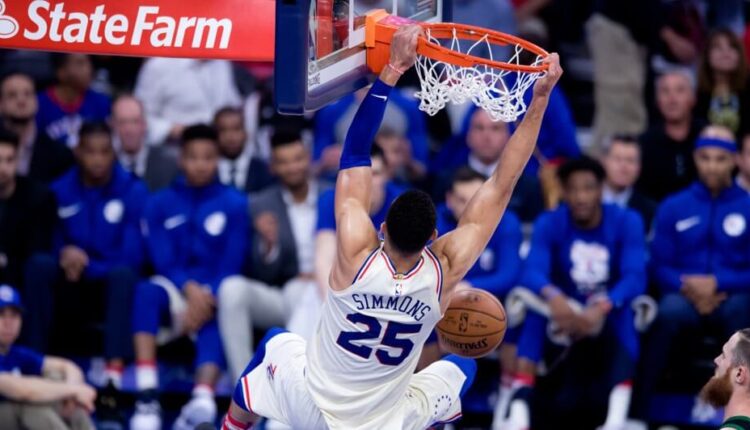 We broke our golden rule on Wednesday by recommending an elite player above $10,000 and the fantasy gods rewarded us with a DNP. It was actually Giannis Antetokounmpo’s first game missed this season, so, we’re not going to break that rule ever again. Aside from that, the article went swimmingly and we’ll look to keep that rolling here. With that in mind, let’s get into our 12/13 NBA DFS picks.

Simmons is honestly not someone that I use a whole lot for DFS but this situation has success written all over it. The biggest reason we love him is this matchup, facing a Pelicans team who ranks 27th in defensive efficiency and 29th in points allowed. What’s more, is the fact that they surrender the most fantasy points in the league to opposing point guards while playing as the fourth-fastest pace in the league. That’s the recipe we love for an athlete like Simmons, as he should flirt with a triple-double against this type of opponent. He’s scorching hot right now too, averaging 41.4 DK points over his last 14 games.

Indiana is one of the best teams to target on this slate and we have to love their ball-handler in this type of circumstance. Brogdon is just that, as he’s essentially taken over the Victor Oladipo role. That has led to him averaging 37 fantasy points per game while scoring at least 34 DK points in all but three games this season. That’s an elite floor and it’s hard to overlook that type of production when you see that he faces a Hawks team who sits 28th in total defense while owning a 27th OPRK against opposing PGs.

With Mike Conley expected to miss yet another game, we have to consider Mitchell. The reason for that is because he has a 34 percent usage rate with him off the floor this season. Getting a boost in usage is awesome for a player with an already impressive floor, with Mitchell scoring at least 25 fantasy points in all 25 games played this season. The best part about using Mitchell here might be the matchup though, with Golden State ranked 25th in defensive efficiency while allowing the fourth-most fantasy points to opposing SGs.

Buddy is in the best stretch of his career right now and it directly correlates with De’Aaron Fox’s injury. What it’s really done is open up usage, with Hield averaging 38 minutes and 22.2 shots per game over his last nine games played. That has led to him scoring at least 35 DK points in all nine of those fixtures while averaging over 40 DK points per outing. All of that makes him very enticing against the Knicks, with New York ranked 24th in defensive efficiency.

With the potential of Giannis missing this game, Middleton could be one of the biggest values on the board. With last year’s MVP off the floor, Middleton is posting a 33 percent usage rate while averaging 1.34 DK points per minute. That’s on par with players in the $9,000-range, as Middleton remains quite the value in the $6,000’s. He showed that on Wednesday, dropping at least 32 DK points for his fifth-straight outing. Getting to face Memphis isn’t too shabby either, with the Grizzlies ranked sixth in pace and 26th in points allowed. If Antetokounmpo is out, pivot to Eric Bledsoe and Ersan Ilyasova too!

Ingles has been a regular in my articles since Conley went down and it’s easy to see why when looking at his production. The simple fact is, he’s the primary distributor with Conley off the floor. Not only has he started four-straight games, but Ingles also has at least 31 DK points in four of his last five fixtures. That makes it hard to believe that he remains below $6,000 on both sites and we can’t overlook a matchup against a 25th-ranked Warriors defense either.

While Nikola Vucevic is expected to return here, it’s hard to overlook the way Gordon is playing right now. Not only does he have at least 26 DK points in five-straight games, but Gordon is also averaging 36 fantasy points per game in that span. The simple fact is, he’s starting to shoot and rebound much better, averaging 9.6 rebounds a game in that span while shooting over 50 percent from the field. That stellar form makes him very attractive against the Rockets, with Houston ranked third in pace while surrendering the most fantasy points in the league to opposing PFs.

Don’t look now but Markkanen is finally starting to perform. After a disastrous opening month, the Arizona product now has at least 25 DK points in seven-straight games. That’s the guy that we’ve become accustomed to, averaging nearly 30 fantasy points per game in that span. The poor start to the season has lowered his price to a number we can’t overlook either, as he should be $1,000 more on each site. The matchup is the icing on the cake though, facing a Charlotte club who allows the third-most fantasy points to opposing power forwards.

This dude is grabbing rebounds like his life depends on it. Over his last 13 games, CC is averaging 14.8 points, 17.9 rebounds and 2.2 blocks per game. That equates to about 45 DK points per game which makes this price tag hard to understand. A lot of that production has to do with the Rockets playing at such a fast pace and that makes him a near guarantee to reach a double-double every single night. Orlando certainly hasn’t been able to slow down opposing centers, allowing the fourth-most fantasy points to them this season.

Recent statistics are not going to make you want to use Turner but he’s got way too much potential to be priced this cheaply. We’re talking about a guy who literally has 50-point potential, which would equate to 10X value at this price tag on DraftKings. Any player with 10X upside is in play, even though he’s in the worst slump of his career. It’s not like he’s garbage either, averaging 27 fantasy points per game for the year. What we really love is this matchup though, with Atlanta allowing the fifth-most fantasy points to opposing centers while ranked 29th in defensive efficiency. With all that said, I only want to use him on DraftKings.