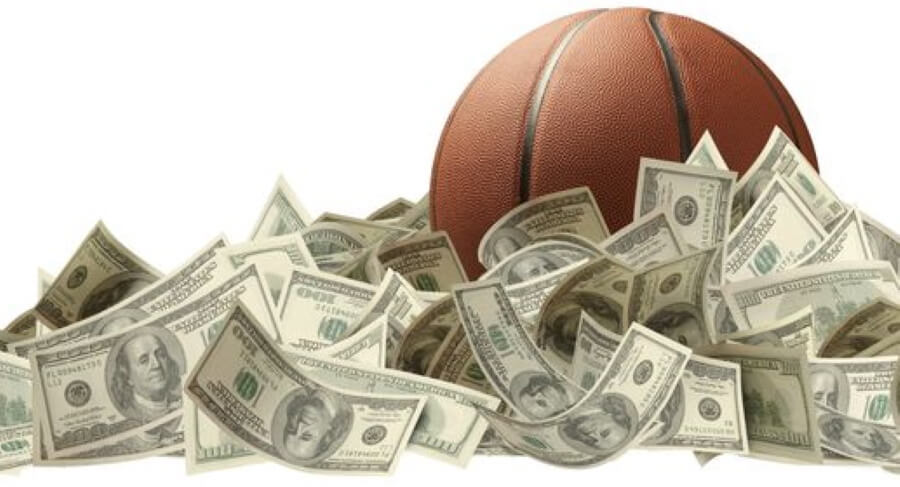 If you’re unfamiliar with what DFS stands for, it’s daily fantasy sports. Some great minds out there took a beautiful fantasy product and made it even better. To put it simply, it’s being able to play fantasy sports every single day. The most common format is salary-based lineups but we’ll go over that more later. The biggest thing you need to know is that there are big bucks in this industry and millionaires made literally every single week. With that in mind, let’s discuss NBA DFS 101.

The first thing you need to do is decide what sort of contests you want to play in. The two main types are GPPs and Cash Games. The most common format out there is a GPPs because that’s where the big bucks are made. The acronym GPP actually stands for guaranteed prize pool, which means that this is a tournament with just that, a guaranteed prize pool. That means the site puts up the money and it is guaranteed to run no matter whether it’s full or not. They almost always fill but every once in a while, you can find yourself in a tournament with free overlay. That means that there are fewer people in the tourney than the amount that should be based on the prizes and it’s essentially free money for the users. That’s a complicated aspect of DFS but let’s get into GPPs a little more…

So what is a GPP? You know that it’s a guaranteed prize pool but let’s dig a little deeper. More often than not, these are tournaments. Think about it like a poker tournament: Everyone buys-in for a designated amount and the payouts get distributed based on where you finish. For example: If you have a $10,000 GPP, that means all $10,000 will be paid to the people that finish in the top 15 percent or so, with the winner taking down about 10 percent of the guaranteed prize. Usually, if you finish in that top 15 percent, you’ll land a min-cash which means you pretty much double your buy-in. The reason that this is the most popular DFS format is that it’s one of the easiest ways to make ridiculous capital on your investment.

So, what is the difference between a GPP and Cash Game? The simple way to decipher the two is by looking at the payouts. While you usually can’t make more than 10X your buy-in in a cash game, it’s a great way to build your bankroll. There are tons of ways to play cash games too, so let’s get into all of the different styles of cash games.

50/50’s/Double-Up/Multipliers: This is simply numerous people buying into a tournament and making double their buy-in if they finish in the top half of the pool. There are also triple-ups and 4X, which is simply means one-third of the pool making triple their buy-in and one-quarter of the tourney making quadruple their buy-in. It’s way more important to build safer lineups in these types of contests but we’ll go over that later.

Head to Head: This might be my favorite type of contest. This is simply what it says, a head-to-head battle. It’s you and one other person buying in for the same amount and playing one-on-one for a winner-take-all format. You can do this from $1 all the way up to $50,000. Some consider it the easiest form of DFS because you only have to compete with one other score.

Beat the Score: This is something that has just popped up recently and it’s becoming a very popular trend in DFS circles. All you have to do is reach the designated score threshold and you’ll split the prizes with everyone else who clears the designated total. The higher the number, the bigger the share because of how hard it is to reach that total.

Now that we discussed the different types of contests that you can enter, let’s briefly go over the different types of slates available. Almost all of the money will be tied up in main slates, which is simply when the most games will be played. That’s typically a Sunday at 1ET for NFL and a night slate beginning at 7ET for NBA and MLB. These will obviously have the biggest prizes because that’s when most people want to play. One thing that’s growing in DFS is single-game contests. There are lineups based on one game and it’s become very popular for things like Monday Night Football,  MLB Playoffs, and Primetime NBA. This is a way for DFS players to get action when nothing else is on and it’s a very unique lineup construction.

Let’s rewind a little bit and discuss lineup construction for GPPs and Cash Games. Almost every site out there uses a salary-based format and it’s truly become the primary way of DFS. To put it simply, you build a lineup with designated positions and have to use a particular salary to fill the lineup. While the salaries are different on every site, each player’s value is based on their performance. For example, LeBron James, James Harden, and Russell Westbrook are the highest-priced guys while random players like Mason Plumlee, Taurean Prince and Jeremy Lin are very cheap. The idea here is to mix these expensive and cheap guys to build a lineup and use the majority of your salary to fill it optimally. Here are two quick screenshots of what lineup construction and on DraftKings and FanDuel looks like.

That’s what it will look like to build a lineup on those sites but we also mentioned single-game entries. This is also a salary-based format but it takes a little different strategy. Most sites have a captain/star position that offers up double points for that player. That’s because there are limited options available and the lineup usually only consists of a handful of players. Here’s a screenshot of what a lineup in a single-game entry would look like.

Now that we have the simple stuff out of the way, let’s talk a little about strategy. When you decide between a GPP and a Cash Game, you need to ask yourself one question: What sort of player am I? This is something that took me a long time to figure out but I came to the realization that I’m a better cash game player. The reason for that is because I’m very knowledgeable and I rarely set dud lineups. While I do love to play GPPS, my style caters more to cash games because I always find good values but rarely enter multiple lineups.

This is what you all came here for. How the heck do I build a good GPP lineup? My biggest wins in tournaments have all been from building a stars and scrubs lineup. This is simply mixing the most expensive players with a bunch of minimum priced guys. It’s rare to be able to get three of the best players in the NBA into your lineup but it’s much easier when you have a handful of random guys receiving big minutes.

For example, My biggest cash actually came on DraftKings and I followed this strategy to a tee. I had James Harden, Anthony Davis, and Andre Drummond all in my lineup and mixed them with guys like T.J. McConnell, Dewayne Dedmon and Marcus Thornton. I just so happened to pick those three nobodies because they were all filling in for injured starters and it led to some of the biggest games of their careers. That’s actually one of the most important things to follow for DFS, as you need to understand usage rate, rotations and minutes. If you understand these three things, you’re already way ahead of the field.

You also need to enter multiple entries into a GPP. There are literally people entering 150 lineups and it’s nearly impossible to compete unless you do multiple lineups. That’s why I love single-entry tourneys though, as users can only buy into those once. That limits the number of sharks and it evens up the playing field for everyone.

This is all about playing it safe. The goal in a cash game is to get as many shots and minutes into your lineup as possible. Sometimes, there are chalky players that you need to fade in a GPP because they’ll be so widely owned but that’s not an issue in cash games. In fact, you simply can’t pass up on someone who’s guaranteed to reach 5X production. 5X production means that you’re getting five times the player’s price tag. For example: If a player is $5,000 on FanDuel, you need 25 fantasy points to reach 5X value with a $60,000 salary. Reaching that 5X goal is critical because that equates to 300 FanDuel points if you get 5X from all players at a $60,000 salary.  That 300-point mark is right around what you need to cash and that’s something very important to understand for cash games.

What you also need to understand is that you don’t need to bet on players with high upsides, you need to bank on players with high floors. One dud can absolutely kill your cash game lineup, so it’s imperative to pick players who have a 5X floor. That’s why stars and scrubs really doesn’t work for cash, as you need to fill your lineup with more mid-tier players. Taking risks in GPPs is critical in terms of taking one down but you need to play it as safely as possible to get by in a cash game.

The most important thing to understand in NBA DFS is to be safe with your money. Never risk more money than your willing to lose. You’re picking a hobby that is filled with sharks who do this for a living and it’s not going to be as easy as it sounds. It takes years to become a good player and it’s imperative to be smart and take everything in stride. Most importantly, have fun. At the end of the day, this is fantasy sports and if you’re not having fun playing, try a different hobby!

If you have any comments or questions, reach me on Twitter @Bartilottajoel.