Bring on the Nate Lowe hype for 2021! As the unofficial leader of the “Free Nate Lowe” movement, Friday was a great day for me. The Tampa Bay Rays dealt the young first baseman along with Jake Guenther to the Texas Rangers for middle infielder Osleivis Basabe, outfielder Alexander Ovalles, and the slugger without a definitive defensive home, Heriberto Hernandez. I’ll discuss the prospects in this deal some other time in an article or on a podcast, but the main purpose of this article is to discuss and analyze Nate Lowe’s profile and see just how valuable he can be in 2021 and beyond.

That performance and the massive in-game power gains sent Lowe’s prospect stock soaring up, well within top-100 lists and even as high as a borderline top-25 overall prospect. Since then, Lowe has still been performing well, but has yet to gain consistent at-bats at the Major League level. He’s earned the at-bats, but the Rays love to platoon hitters and play the matchups outside of their top few hitters. Now a Texas Ranger, Lowe has a much clearer path to playing time and makes for a great 2021 breakout pick.

This is the area of Nate Lowe’s game that might stick out the most. You might not think so when you see his career .251 average, but many evaluaters, myself included, graded his hit tool as either above-average or plus coming up through the Tampa Bay system. That encompasses both his solid contact skills and his approach that led to a .300 AVG and .400 OBP in the minors. Here’s an excerpt from my Tampa Bay Rays Top-25 Prospects article back from January of 2019:

“For a big man, Lowe has phenomenal bat control and plate coverage. He’s shown above-average contact skills throughout his minor league career and has limited his strikeouts while consistently recording walk rates north of 10%. Lowe has seemed to find that nice balance between being patient waiting for a pitch to drive and aggressively attacking mistake pitches from opposing pitchers.”

That last part was the key to his breakout in 2018. In his first two minor league seasons, Lowe hit .284 but only mustered 11 home runs in 182 games despite having plus raw power.

There are no platoon issues to worry about either. In fact, Lowe has mostly thrived against left-handers and posted a .313 and .286 average against them respectively in 2018 and 2019 in the upper minors. Sure, that mark has dropped to .231 in the Majors, but over an extremely small 45 plate appearance sample size. That sample size is spread out over parts of two seasons also, with no prolonged string of plate appearances at one time.

That right there has been part of the problem for Lowe so far in the Majors. The Tampa Bay Rays have gone full Tampa mode with Lowe and haven’t given him much extended run. I’ve said it before and I’ll say it again, young players receiving consistent at-bats is crucial for their development. Sure, they’re likely going to experience some struggles and peaks and valleys, but let them work through it. Hopefully now that he’s in Texas with a clean line to a starting gig, Lowe will finally receive those regular at-bats that Tampa Bay never gave him.

In their defense, they did give him reps at third base at one point, which shows that they were trying to get his potent bat into the lineup, but nothing ever came of that. They sure could’ve used Lowe in the World Series when most of the lineup outside of Randy Arozarena went cold and couldn’t handle Dodger pitching. I’m not saying he would’ve changed the outcome of the series, but you never know.

Now, back to Lowe. Another peculiar metric I saw on Baseball Savant was that Lowe has mostly struggled against fastballs through his brief Major League career.

After hitting a respectable .256 against them in 2019, that mark plummeted to .122 with a .188 xBA, .313 xSLG, and .264 xwOBA in 2020. His 32.1% whiff rate and 36.8% put away rate look just as bad or even worse. Pitchers seemed to notice that and threw Lowe fastballs 70.5% of the time. Again, it’s a small sample size with only 47 plate appearance, but it’s definitely something to monitor moving forward. But with that said, I’m confident that this trend won’t continue as Lowe never showed these issues in the minors. In fact, that was one of the reasons why I was very high on him as a prospect. Lowe didn’t really showcase any glaring weaknesses against a specific pitch classification.

Longterm, I’m not worried. Lowe has the looks of a .280-.290 hitter that can post an OBP around .360-.380 as well thanks to his strong walk rate that was above 10% every year in the minors and sat at a robust 13.6% overall along with a solid 18.5% strikeout rate. Lowe is going to have to cut down on the strikeouts in the Majors however as he’s currently at a 31.5% clip there. But again, I’m going with the track record, at least to the point where I don’t anticipate Lowe’s strikeouts ever being an issue that effects his longterm production.

As I mentioned above, the power took a little longer to translate into games for Nate Lowe. He consistently displayed plus raw power, but a 54.4% groundball rate in 2016 and 47.7% in 2017 weren’t doing him any favors. Since then, the flyball rate still isn’t where we’d ideally want it to be, mostly in the mid-30% range, but Lowe’s groundball rate has been consistently decreasing while his line drive rate has been improving. Below is his FB+LD rate each year of his career so far.

As Lowe’s line drive rate has increased, as has his estimated flyball distance and corresponding home run numbers. After hitting just 11 combined in 2016 and 2017, Lowe slugged 27 in 130 games in 2018 and then 23 in 143 combined games in 2019 between Triple-A and the Majors. The great thing about Lowe too, is that he doesn’t have to sell out for his power. In fact, Lowe’s swing is quick but without much effort. Basicially, the definition of easy power. Just look at the rocket he hit off likely future hall of famer, CC Sabathia, back in 2019.

Nate Lowe's second #MLB homer was clutch for @RaysBaseball, as it put the team up 3-2 in the seventh in an AL East rivalry matchup with the Yankees. pic.twitter.com/8hlxYNM35O

That ball left the yard like in a hurry and was off a breaking ball to boot. Lowe didn’t need to put much effort into the swing either. His natural strength and quick hands were enough to wallop that pitch into the right field bleacher seats with relative ease. He has that type of power to all fields as well, as you can see below.

The #Rays' No. 9 prospect flexes his muscles with this solo shot, his 4th homer of #SpringTraining and 2nd in the past 3 games. Gameday/watch live: https://t.co/Vugcc8Kwpb pic.twitter.com/1u6KFKRxQi

The beauty of an easy swing like this is Lowe’s ability to generate hard contact without a ton of effort. Through his first two seasons, Lowe has posted an 11.9% barrel rate, 90.6 average exit velocity, .439 xwOBACON, and 44.8% hard-hit rate, all of which are well above league average.

Lowe’s all-fields power should lead to around 25-homers as is, but there’s legit 30-homer upside if Lowe can continue to drive the ball in the air more consistently and improve his launch angle. His 13 degree launch angle in his 2019 debut was nice, but that dropped to just 7.1 degrees in 2020. Getting that back up above 10 degrees would be encouraging to see in 2021.

As I mentioned above, the playing time situation is now much clearer for Nate Lowe in Texas. In Tampa Bay, he was going to have to fight for at-bats at first base with Ji-Man Choi, a player the Tampa Bay Rays are absolutely in love with. Now, all Lowe has to do is beat out Ronald Guzman who profiles more as a bench bat anyway. For what it’s worth, Roster Resource currently has Lowe starting at first base and hitting 6th. 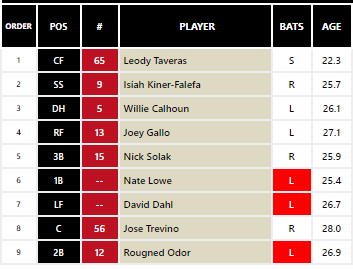 That lineup spot could just be temporary, too. Gallo is likely locked into a heart of the order lineup spot, but out side of him, there are no other locks. Willie Calhoun hitting 3rd? Yeah, that’s certainly not set in stone.

There’s a reason why the Texas Rangers traded for Lowe. I can’t imagine seeing him platooning or riding the bench in 2021. Expect Lowe to play regularly and provide solid contributions in the AVG, OBP, and HR departments with the potential for 90 RBI as well over a full season.

Will the above projection provide a yes answer to the question I posed in the title of this article? I think it can. Going off of Razzball’s 2020 player rater, the 10th best 1st baseman last season was either Christian Walker or Vladimir Guerrero Jr, depending on if you wanted to include some of the catchers that were also eligible at the position. I definitely think Lowe can get up into that range in 2021 if he approaches the projections I have for him above. This Texas lineup could be sneaky-good in 2021 and Lowe should be a big part of that. For now, I’ll err on the side of caution and rank Lowe as my #15 first baseman for 2021 redraft leagues.

Before the trade, I ranked Nate Lowe #221 overall in my top-500. Obviously, that’s rising with the better opportunity in Texas. I’m sure I’ll tinker with this more before my next update (coming soon), but Lowe is now in the 170-180 range and he has the upside to rise into my top-100 by the end of the 2021 season.

So, to answer my initial question…. Yes. Nate Lowe has the chance to be a top-10 fantasy first baseman in 2021. The earlier you draft the better, too, as his ADP is only going to rise from now until opening day in the beginning of April.

All aboard the Nate Lowe hype train! Choo choo.